The Horned Frogs present yet another new challenge for Bridget Carleton and company. After starting Big 12 play 0-3, TCU has rattled off six straight conference wins, boosting themselves up to No. 22 in the AP Poll.

The matchup marks the fifth straight ranked opponent that ISU has faced, with seven of the 11 total conference games remaining against top-25 teams.

Still, the Cyclones are 6-5 at home on the year and hold the edge over TCU 4-2 when playing at Hilton Coliseum. Expect a high-scoring affair this time around at Hilton, with Iowa State and TCU sitting at No. 1 and No. 2 respectively in 3-pointers made per game in the Big 12.

If Iowa State wants to come away with a win, the Cyclones will need a strong fourth quarter to do so. The Horned Frogs have won close games against the likes of West Virginia and Texas, while the ‘Clones have struggled finishing games this season.

Following an unbelievable road performance where she dropped 39 points versus Oklahoma State, Bridget Carleton put up 19 points in a losing effort in Texas. On Monday, she was named the Big 12’s Player of the Week. What makes her success even more impressive is how she’s doing it against some of the toughest defenses in the Big 12.

“There’s no question that the way people are guarding Bridget is just to beat the living hell out of her,” said Iowa State head coach Bill Fennelly. “She never complains. She never says a word. We joke that she’s a Canadian and has got hockey in her blood.”

For a team that desperately needs that second option, Emily Durr has started to fill that void as of late, scoring at least 15 points in her last three games.

After a private meeting with Fennelly just a few weeks ago, Durr acknowledged that she needed to step up and play the way she knows she can with only a month left in her Iowa State career.

“You want a coach that’s direct with you and tells it how it is,” said Durr. “We don’t want somebody that lies to you and tells you everything’s alright when it’s not.”

One of the best in the business, Fennelly always seems to know what’s most important for his players and Durr stands alone as an exception for this team being the lone senior.

– Bridget Carleton has the most weekly honors of any current Big 12 player.

– Carleton has scored in double figures in every game this season. 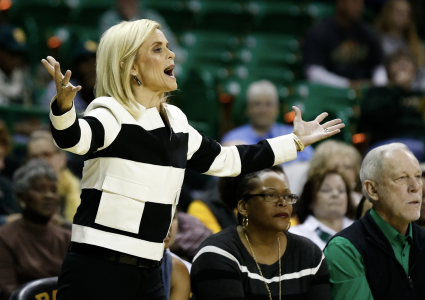