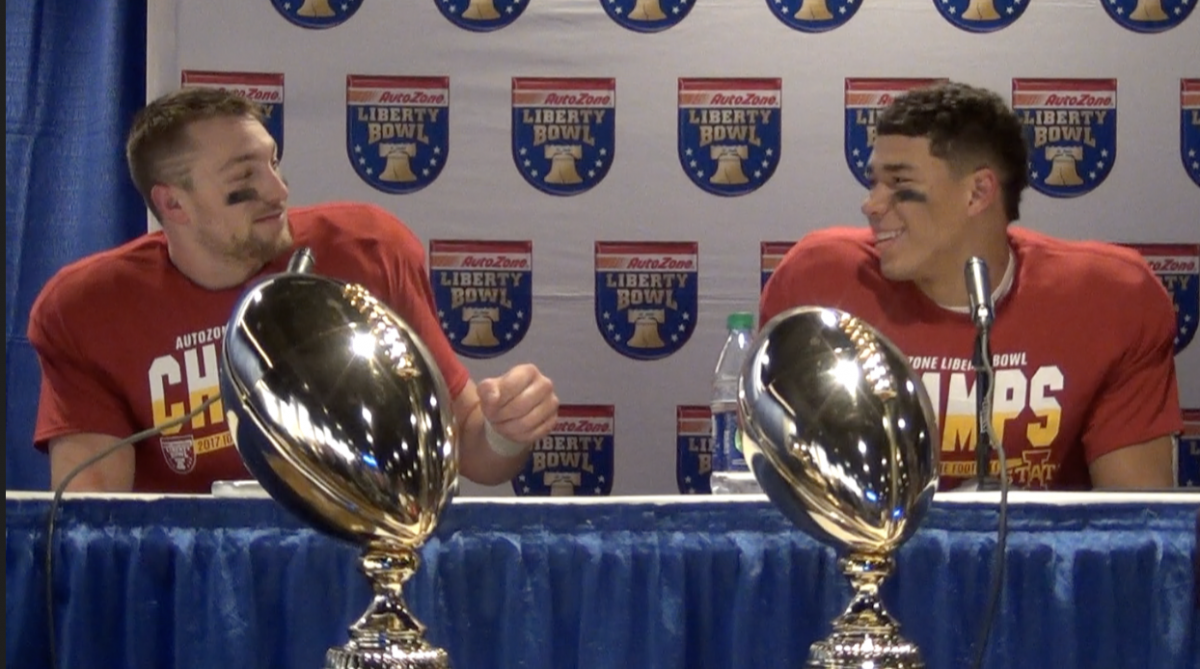 MEMPHIS, Tenn. — It is the bromance Iowa State fans deserve — and its on-field ending could not have been more perfect.

Culture changers who will be remembered forever for their impact on the Iowa State football program, capped by perhaps their greatest moment on Saturday in Memphis.

Lazard, who entered the Liberty Bowl as the most decorated wide receiver in program history, saved the best for last as he hauled in 10 receptions, tying the Liberty Bowl record, for 142 yards and a touchdown along the way to earning the game’s MVP honor and arguably the coolest freaking trophy in the history of the universe.

Dude…. This is the trophy Allen Lazard gets for being the game’s MVP. If I don’t steal it and take it home first. pic.twitter.com/6yGitePa9S

The former four-star legacy recruit from Urbandale ends his career as Iowa State’s all-time leader in career receptions and receiving yards. Saturday, he moved into the top-10 all-time in Big 12 history in receiving yards. His third-quarter touchdown was his 10th of the year, breaking the program record for a single-season.

“Playing against (five) all of high school, now playing with him, we’ve obviously grown a lot together,” Lanning said. “We’re best friends. We room together on every away trip. We were together all week this week. It’s an honor to play next to him and see how he practices and prepares. I’m learning off of him, obviously, on the defensive side. It’s awesome to play (with) one of the greatest receivers ever to go through Iowa State.”

When asked what allowed him to have success against the Memphis defensive backs, Lazard had a simple answer full to the brim with swagger.

“They were just a lot smaller than me and I’m a big receiver so I used my size and speed to my advantage,” Lazard said. “I just felt like they couldn’t hold me at all.”

While that was a good way to answer the question, Lanning was able to explain it even more simply.

Ah, yes, there is little doubting Lazard is the real deal.

The same can be said about Lanning, Iowa State’s defensive leader, who compiled four tackles and a sack in his last collegiate game. Those numbers barely tell the story of Lanning’s impact on Saturday’s game.

The Ankeny-native scored his second rushing touchdown of the season, converted on a crucial fourth down late in the game then capped it all with a nine-yard rush for a first down to seal the win with less than two minutes left.

“To me, Joel Lanning is the greatest Cyclone of all-time,” Lazard said. “Just everything he’s done for this program and the sacrifices that he’s made. Not only to switch positions but to switch sides of the ball. He’s so fluent with it and to have the success that he’s had, it’s unbelievable. I’m honored and privileged to call him one of my best friends and to sit here and play by him.”

The always humble Lanning shook his head at the greatest Cyclone of all-time comment. But everybody who has followed this story closely knows No. 7 has a claim on some level. So does No. 5.

Two of the best to ever wear Cardinal and Gold. Two best friends.

when you and your boy realize you’re two of the best to ever do it in cardinal and gold pic.twitter.com/rOH4SPovzZ