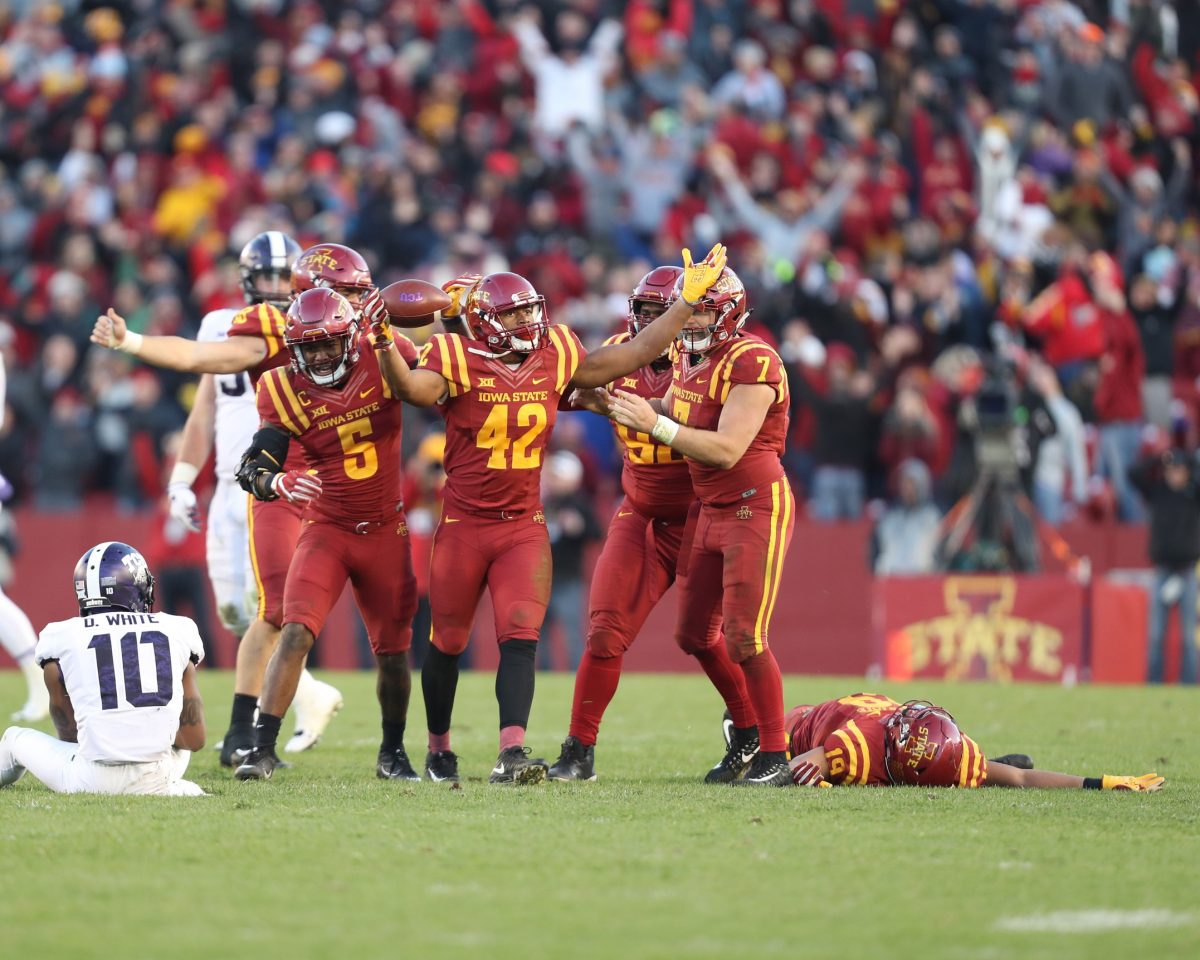 And this one, came at home.

Spears’ leaping grab, bobble and triumphant, but necessary somersault to the Jack Trice Stadium turf ensured the No. 25 Cyclones’ 14-7 grinder of a Big 12 triumph Saturday over No. 4 and previously unbeaten TCU — and prompted a raucous postgame celebration by fans who massed on the field.

“I was just packing down the seam and I happened to look in and see (Horned Frogs quarterback) Kenny (Hill) look at the inside receiver,” Spears said. “Broke on it and when he threw it I had to catch it. It was (moving) in my hands so I was like I have to to flip over with it to secure this catch. Flip, caught it, that’s how it went.”

Simple as that. One moment fed by countless other ones in this defense-driven win that made ISU (6-2, 4-1) bowl eligible for the first time since 2012 and tied for first place in the league.

THEIR GAME CLINCHING INTERCEPTION IS EVEN BETTER WITH TITANIC MUSIC!!! (@CYCLONEFB)

“I thought he dropped it for a second and I was like, ‘All right, it’s third down or whatever,’” Cyclones defensive end J.D. Waggoner said of Spears’ pick. “But he caught it and I was like, ‘Game’s over.’ It was awesome. He plays his tail off every single play. We’ve got a great group of linebackers, man. You see it on film and you see it on the field. They go hard every single play.”

He’s obviously not alone — on defense or on offense. Oh, and that 4-1 conference start? No other Cyclone team has done it. Not once.

“We got over that (six-win) hump and now we’ve got to keep going,” said linebacker Joel Lanning, who like Spears had nine tackles. “We’ve just got to keep things rolling and come back to work tomorrow. Take care of our bodies and just keep moving forward.”

But let’s take a moment to ponder where Iowa State’s been since the first week of October — and that’s on a mission.

The Cyclones stood 2-2 overall and 0-1 in Big 12 play with a trip to then No. 3 Oklahoma looming. Then came a bombshell: Quarterback Jacob Park would take an indefinite “personal leave” from the team. That leave’s still in effect.

Then Kansas limped into town and left limping more after a 45-0 Cyclone triumph.

Then ISU dropped Texas Tech 31-13 last week on the road — a win cemented by a Spears’ pick six with nine minutes to go.

Now today. And tonight. The fans streaming onto the field and players reveling in the moment — then shuffling to the tunnel — to cap a momentous and madcap month.

“I can’t explain it,” said Spears, who totaled nine tackles in Saturday’s victory. “It’s something I’m going to remember for the rest of my life. I really appreciate it. I still give everything to God.”

In fact earlier this week, his father, Marcel, shared scripture with him. It’s a common exchange, which dates back to when Spears Jr. was a young boy.

That’s win. From the film room to the practice field, from the locker room to the first and last plays of the game.

“I thought it was a great opportunity for us to play and measure ourselves against a quality opponent,” Cyclone head coach Matt Campbell said. “I think the biggest thing I’d say about our kids is we played harder for longer, which was really rewarding to see.”

ISU’s defense is now the Big 12’s stingiest through five league games. The Cyclones entered tied with TCU (7-1, 4-1) allowing a paltry 15.2 points per game. Saturday, the defense didn’t allow a single one. Frogs star Kevontae Turpin returned the second half-opening kickoff for a touchdown and cornerback Brian Peavy made a goal-line interception in the third quarter to defuse a potential game-tying scoring threat as the defense again shined for ISU.

“The red zone stop, down on the goal line is the difference,” Campbell said. “We call a timeout — they called a timeout and we come to the huddle and just said, ‘Listen. Just keep playing.’ I think that’s the mantra of this team, ‘Just keep playing. Keep your poise. Keep playing.’ We get a great stop on first down. Second down they try a play-action pass and a couple guys make some huge plays. So obviously the last pick is huge, but I just think the way our football team continues to play, in terms of confidence and getting better — they really believe in each other.”

That’s evident to Spears, who held the football to his ear before striding to the sidelines and watching Kempt kneel out another big win before Halloween.

“Man, it actually came from my brother that lives in Louisiana,” Spears said. “I’ve always seen him do the ‘Hello, hello,’ thing, but I wanted to put my own twist on it. Everything that’s happened for me and my team, everything is God. It is God, so I decided to call God. That’s where that came from and now it’s sticking with me.”