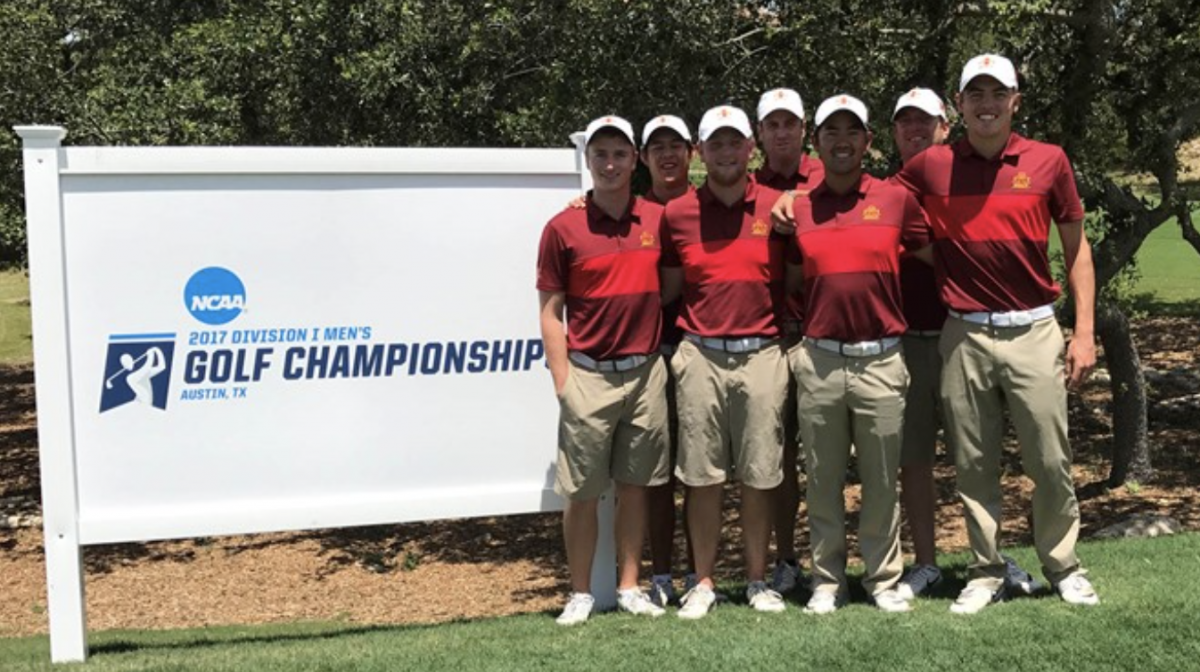 AUSTIN, Texas – The Iowa State men’s golf team is back in the NCAA Championship for the second time in the last four years, and they made it in record-setting fashion.

The Cyclones achieved the incredible accomplishment, which has only happened eight times in the history of the program, by carding their greatest round in school history this afternoon at the NCAA Austin Regional at the UT Golf Club.

ISU produced a staggering 26 birdies and one eagle this afternoon, posting a score which was seven shots better than any other team in the field in its final round today.

The top five teams earned spots to the NCAA Championship, May 26-31 at Rich Harvest Farms in Sugar Grove, Ill. It marks only the second time (2014) in school history the Cyclones have qualified for the NCAA finals since the Regional format was introduced in 1990.

“I think the mindset all week was to have fun and enjoy ourselves,” Iowa State head coach Andrew Tank said.  “We might have gotten uptight and a little too serious earlier this year, and we hadn’t played our best. The goal was to be relaxed. I reminded the guys last night about that and we did that today. I couldn’t have been more pleased. We didn’t need Sam’s (Vincent) score today, but he posted a great number (72). We have felt good about our five guys all year and today just showed it.”

What made Iowa State’s historic day even sweeter was the play of Voke, who became the first Cyclone to win a NCAA postseason event with a 14-under 199 tally.

Voke, who now has a school-record five-career tournament titles, was one shot out of the lead after 36 holes. The senior then backed up his second-round 67 with a school-record 61 this afternoon, claiming medalist honors by five shots (199) and breaking ISU’s school record for low 54-hole score by two shots.

The former competitive course record at the UT Golf Club was a 65. Voke dusted that mark by four shots.

“I thought a couple under would give me a chance, but as I went on with the round, the birdies kept on dropping,” Voke said. “After I got the eagle on No. 14, I started feeling better. I hit a decent drive and then put a 3-iron to about 17 feet and made the putt. These days are few and far between. I knew my game was trending and this could be coming. To come up with a round like this in the Regional is something pretty special.”

Tank walked all 18 holes with Voke today. He witnessed history.

“It was a very special round,” Tank said. “He hit the ball really solid. His wedges were dialed in. He just put on a great putting display, really for the entire tournament. Today he was on fire. It was cool for him to do it on the big stage. This is really special for him because he missed out on playing with us in 2014 at nationals and he can experience it now.”

The Cyclones’ amazing final day was a group effort.

Sondjaja’s 66 today tied for the second-best round by a Cyclone in NCAA competition and it pushed him into a tie for 10th at 211. The senior racked up six birdies on his card today, helping him earn his 12th career top-10 finish.

The Cyclones are one of five Big 12 teams to advance to the 30-team NCAA Championship field (Oklahoma State, Texas, Baylor, Oklahoma).

ISU has played against the best all season, and it will continue their journey on the grandest stage in golf next weekend.