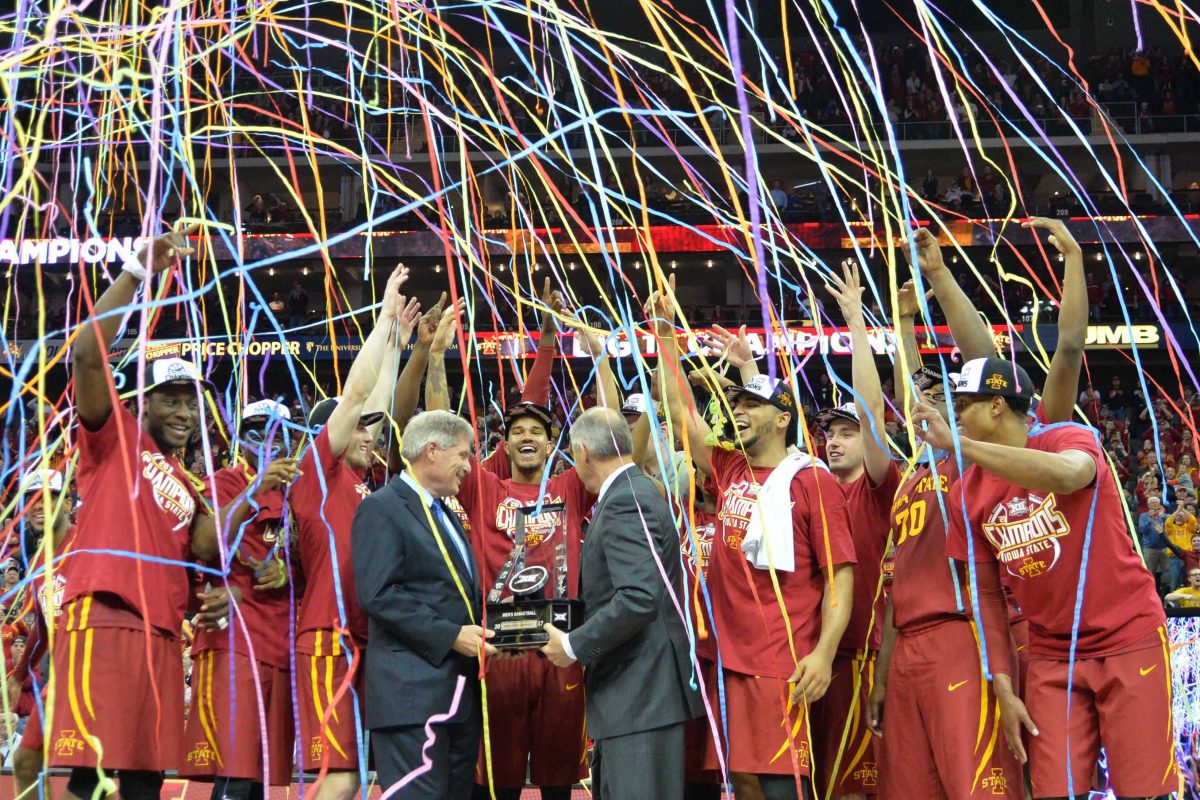 I had one of the most enjoyable 48 hours of my life last weekend at the Big 12 Men’s Basketball Tournament in Kansas City.

Until the afternoon of Iowa State’s quarterfinal game against Oklahoma State, I hadn’t yet decided on my final plans for the weekend. But a texting conversation with Jamie Pollard convinced me to do something that I should have done many moons ago. Once the Cyclones beat the Cowboys, I was officially going to make the three hour voyage from my home in Omaha to the tournament. After dropping off my kids at school, I hit the road. As I look back and look forward to tonight’s game against Nevada, I am inspired to share some of my thoughts on the weekend.

First, THANK YOU. I had a great time because of the fans. The students and alumni of Iowa State know how to have a good time. Since this was my first experience at the tournament, I didn’t know what to expect. I had always heard the tournament was a huge party for Cyclones, but I couldn’t have imagined what I witnessed. I was on the receiving end of so much love from my fellow ‘Clones, and I enjoyed meeting so many people.

I arrived at the Marriott to meet Jamie before heading to lunch. It seemed I was going to be his sidekick for the day. I arrived a few minutes before Jamie, and ended up having a nice discussion with some West Virginia fans. We looked forward to the possible matchup in the finals as well as how much of a home court advantage we may have on Saturday. Droves of Cyclones could head south while very few Mountaineers could book last minute flights halfway across the country for one game. I could almost feel that they were overwhelmed by the exuberant support Iowa State fans show in Kansas City.

Jamie walked in wearing a dark red blazer, and we chatted with some Iowa State fans before Steve Prohm showed up. He was hanging out with his two year old son Cass. The next thing I know, I’m chatting with Prohm and Jamie is at eye level with Cass playing and taking selfies. It’s sort of surreal now that I reflect on it.

The family atmosphere in the athletic department at Iowa State is like nothing else I have ever been a part of. The way Pollard, Prohm, Campbell, Fennelly, and others have embraced a culture of family is unusual in college or pro sports. Usually when big dollars are a part of the equation, big business and time with family is difficult to balance. Jamie Pollard embraces it.

Jamie and I then headed to lunch, shared a beer (I gave him a hard time because he had them put an orange in it) and chatted about all sorts of things. Being that part of Jamie’s job is to be a great salesman, I was happy to hear he took a liking at an app that I am in the process of building. My elevator pitch took about 30 seconds and he was sold.

After lunch, we made our way to the pep rally in the Power and Light district. As we walked, I started to notice that about 90 percent of the people strolling around downtown Kansas City on a Friday were wearing Iowa State gear. My excitement for the game was growing by the step.

As we walked, Jamie asked me to say a few words at the pep rally, so of course I had to start thinking about what I was going to say. We entered the Plaza about 15 minutes early and the place was already filled with Cyclones. Jamie and I agreed to wear these Iowa state “bandanas/durags” as a show of our commitment and passion for our school…..or something.

Once Jamie brought me up on stage, I felt a rush that I haven’t felt since playing in an NFL game. The intensity and excitement of the crowd was intoxicating. For me, the most important thing I said to the crowd was that this tournament is a right of passage for Iowa Staters. If you are a current or former student, or just a Cyclone fan, being a part of the “Hilton South” weekend is something that shouldn’t be missed. I was a freshman at Iowa State 20 years ago. This weekend should have occurred long ago, and more often.

Next, we worked our way through the lively crowd and into Sprint Arena. We mingled with some media members and talked to the band. I realized as we were speaking to them that they were toddlers during the 2000 Insight.com Bowl. Yet, a few actually knew who I was.

Once the game started, roughly half the crowd was wearing cardinal and gold. I sat right next to Pollard and his family as we both interacted with Cyclone fans around us. Near the end of the game, we headed toward the locker room with President Leath. Once inside, Coach Prohm asked if I would talk to the team. I wasn’t quite ready for that but I gave it my best shot.

Minutes later, Jamie and I followed Monte Morris, Deonte Burton, and Prohm to the media room for the post game press conference. I was ready to leave after the Cyclones had wrapped up, but Jamie liked to listen to what the other players and coaches had to say about our ISU team. Sure enough, we both learned a few things about our squad through TCU’s interviews. Head Coach Jamie Dixon called freshman Solomon Young the difference maker in the game. They had no answer for his physicality in the paint. These are the types of little things I learned throughout the day.

On Saturday, as snow fell upon downtown Kansas City, thousands more Iowa State fans headed south from Iowa. One of these fans was my son Peyton who was also about to experience his first taste of the Big 12 Tournament as well. We stood in the back of the packed pep rally before heading into the arena. Some estimated as many as 17,000 Cyclones were in their seats at tipoff. For those who were there, I imagine their experience was as surreal as my own.

This game was what I believe Cyclone Nation is all about. The home court advantage gave our team the energy to beat a squad to whom they had lost two games by double digits this year. Playing three games in three days can’t be easy. Having 17,000 fans on your side surely helps.

As I sat next to my son, a lot of emotions hit me. I grew up in eastern Iowa, in Hawkeye country, yet here I am cheering on Iowa State with an arena filled with Cyclones. My son has become a huge fan over the years. Even though he has lived in Northern Virginia, Miami, Houston, Minneapolis, Boulder, and now Omaha, Peyton was born in Iowa, and has cardinal and gold running through his veins. I don’t have to do much research on recruits or unknown players, I just ask him. I was proud to play at Iowa State, but it makes me just as happy to know how much my son loves the ‘Clones.

Two years ago, Iowa Staters were shocked, and some saddened, when Fred Hoiberg took a job with the Chicago Bulls. At that time, I wrote an article that we should be thrilled for one of our own to take a premier job in sports. The big concern was how we fill the shoes which were vacated by the Mayor. Once Prohm was hired, he didn’t have the honeymoon period which a lot of coaches get. Most ISU fans didn’t know who he was and were skeptical, mostly just because they loved Fred so much.

Fast forward less than two years, and I think all ISU fans believe we have one heck of a coach. Though his first year had plenty of ups and downs, our Cyclones made it to the Sweet 16. This year, after a slow start, our team has improved week to week and just took home a Big 12 Tournament Championship. It’s safe to say we hired the right guy.

We don’t know what will happen this year in the NCAA Tournament. We shall see. I did learn a lot of things from my first experience in KC.

First, we have an athletic director who cares about people, doing things the right way, family, and winning. Jamie Pollard hasn’t and won’t always make the perfect decisions. Being an athletic director at a power 5 school is an incredibly difficult job. I had a chance to see him do it for one day and was extremely impressed with how professional, caring, inquisitive, and personable he is as a man.

I also know he has hired the right football and basketball coaches. I have spent enough time around both Matt Campbell and Steve Prohm to know they are genuinely good people and outstanding coaches. Both are leaders who treat people the right way, and win at the same time. After being around college and pro sports for 17 years, I promise you that is a rare combination to find.

Lastly, I already knew that Iowa State has amazing fans, but the weekend opened my eyes even further as to how passionate they really are. I was interviewed on Saturday by a New York media outlet about different aspects of college sports. He asked me questions about paying college athletes, the NFL free agent market, as well as an interesting discussion about the future of the NCAAs and the Power 5 schools. I don’t know what will happen to the Big 12 Conference going forward. Nobody does. But I told him that I know two things. As we looked out at the sea of Iowa State fans, I said that any conference would be crazy not to want Iowa State. You can’t tell me Iowa State Athletics isn’t big time after that weekend.

Lastly, that passion has grown tremendously under our Athletic Director who I believe is an absolutely perfect fit for Iowa State, and one of the best in the country. 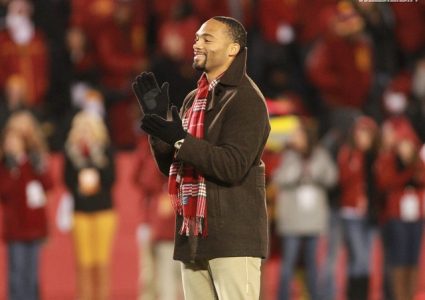