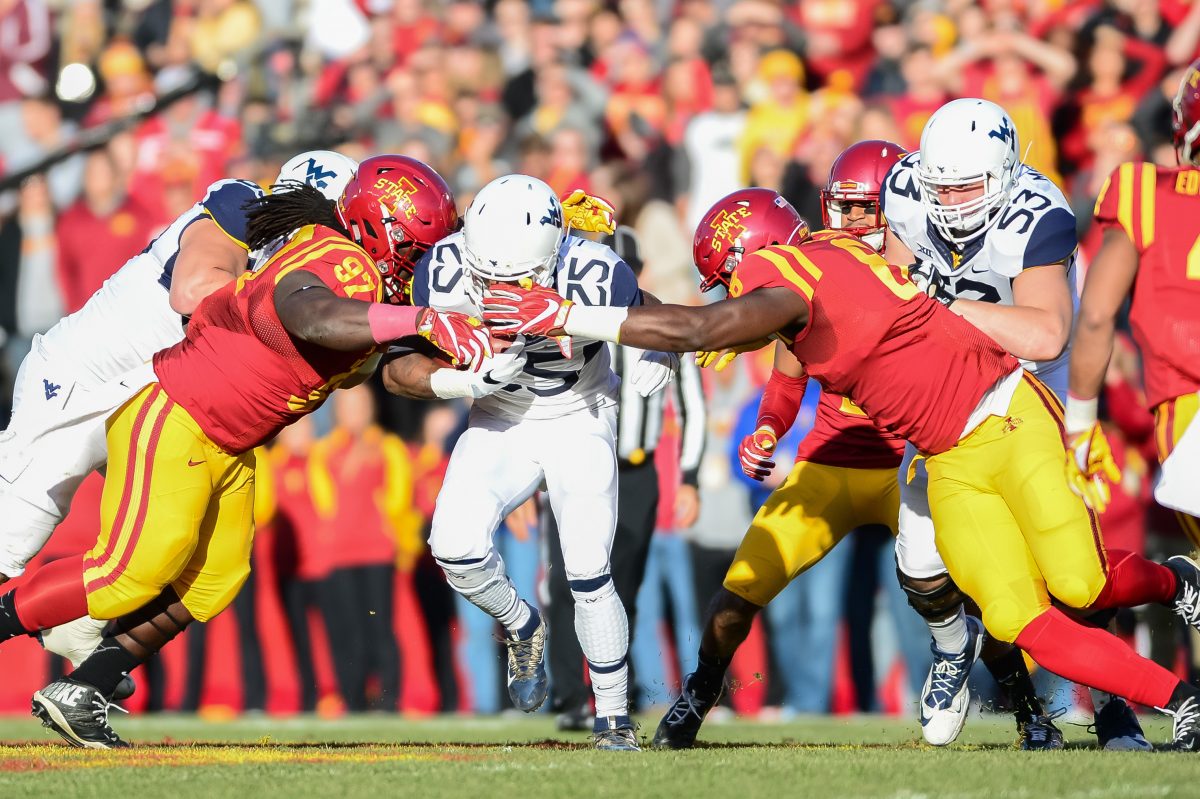 Sweat oozed from every pore of his body. The former Iowa State defensive tackle had drawn every ounce out. Pro Day — and the physical and mental journey leading up to it — clearly took a toll on him, but it’s part of the taxing price the second team All-Big 12 performer gladly pays in pursuit of his NFL dream.

“It was hard on me, kind of moving back home,” said Tucker, who’s been training intensely in preparation for the April 27-29 NFL Draft. “A lot of stuff back home going on, so me trying to work with that and train, it was hard on me, but I managed to get through it.”

Tucker, who is listed as a six-foot, 296-pounder, remains a long shot in terms of the draft itself — just like several of his teammates who ran the 40-yard dash, performed the three-cone drill and bench press, and executed vertical and broad jumps for some 33 NFL scouts Tuesday at the Bergstrom Football Complex.

Tucker, who totaled six sacks in his ISU career, excelled on the bench, hoisting a bar loaded with 225 pounds of resistance 25 times, which would have been tied for sixth-best among defensive tackled invited to last month’s NFL Combine.

His 40 time of 5.17 seconds put him in the bottom third of those performers, but Tucker seemed pleased with his overall effort.

“I’m prepared if I don’t get drafted,” the Hazlehurst, Miss., native said. “I can go into free agency, but they’re saying there’s a possibility I can go late rounds somewhere.”

He’s strong, skilled, but undersized, height-wise. Tucker’s an underdog, but his fight belies his soft-spoken demeanor.

“Worked countless hours,” he said of his training regimen back home. “I was training two to three times a day. Running when I”m not feeling my best. I just never stopped, no matter what. Any day I can get a chance to get out and do some type of activity or run or something, I’m out.”

And by that he means ‘All in.’

Tucker said his mother is ailing. His family’s facing other issues, too. He didn’t elaborate. We didn’t press.

“I just keep praying,” he said, “and keep pushing.”

Cox, a 6-4 tackle who played in the 2015 Pro Bowl, has 28.5 career sacks. He’s well-acquainted with hard knocks — and long shots, too — and shared some wisdom while mentoring Tucker.

“I was fortunate enough to just work with him,” Tucker said. “He took me in. We watched great film of him. He’s teaching me stuff to do in the league, what not to do. It was great.”

Now, Tucker waits. Just like teammate Jhaustin Thomas, another long shot in terms of the draft with big-time potential if the right free agent opportunity materializes.

“Demond’s like my brother,” the athletically-gifted 6-6, 265-pounder said. “So we communicate a lot.”

Thomas’s measurables translate well to the NFL. His past work habits didn’t.

“Lack of focus; not really paying attention and wanting it,” Thomas said of his former self. “I feel like I grew up and matured from that point.”

Thomas, like Tucker, is deeply motivated by his mother. Love fuels the hard work. Grit grinds down doubt.

Pro Day may be over, but plenty of possible pro days and seasons beckon, long shots, or not.

“We just kept motivating each other, telling each other we’ve got to grind, got to get it,” Thomas said. “It’s our chance.”

So they sweat, even as the odds stack up against them. Cox had something to say about that, too.

“He just always told me, Continue to (work) and the stuff that they say that I’m not good at? Prove them wrong,” Tucker said. “Work hard. Do what I have to do. Put more hours into it. No matter how stressful it is, just continue to go.”