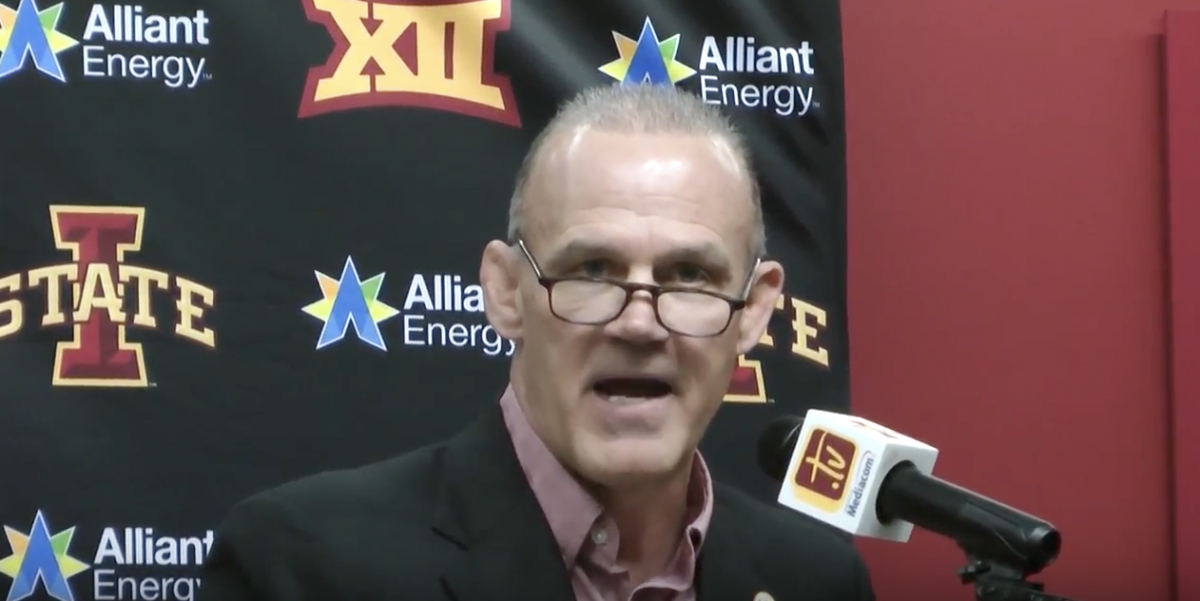 AMES — Jamie Pollard had a three-step plan when it came to searching for a new wrestling coach.

Step one: Listen to the ideas of individuals who are close to the program.

Step two: Target the person he wanted for the program.

Step three: Interview candidates if he couldn’t get his target to come aboard.

Fortunately for Pollard, he never got to step three, as he landed Iowa State’s top target, former Virginia Tech head man and Iowa native, Kevin Dresser. However, Pollard enlisted the help of Iowa State football coach, Matt Campbell, to help pry Dresser from the No. 4 team in the country.

“I don’t know many football coaches who would give up a day of football to travel with an AD to Blacksburg, Virginia to help court (Iowa State’s next wrestling) head coach,” Pollard said, referencing Campbell accompanying him to court Dresser. “More importantly on a strategic side of it, we thought ‘Who better to be able to talk about coming into the Cyclone family than somebody than somebody who just did it a year and a half ago? But more importantly, someone who had to look his student-athletes in the eye and say I’m going to another institution.’”

That asset: having Campbell answer Dresser’s questions about how to deal with leaving mid-year helped the Cyclones land their latest wrestling coach.

During Dresser’s introductory press conference, he listed out short and long-term goals for the Iowa State wrestling program.

The short-term goals were: get to know the current roster and recruits, get the fan base and alumni involved, and having to understand this is will be a rebuilding project.

“I think I can say this because the newspaper already wrote about it but, it’s okay to say we want to beat Iowa,” Dresser said. “For two reasons: No. 1, it’s fun and No. 2, it’s a benchmark. Lets face it, Iowa is pretty darn good. I don’t see them getting any worse. So if we are competing at that level we are in the hunt.”

Before Dresser even first stepped foot in Ames, he had run-ins with Iowa coach, Tom Brands.

Brands was the Virginia Tech coach before Dresser. When Brands left for Iowa City, a lot of Virginia Tech wrestlers went with him. That left a bad taste in Dresser’s mouth. However, the biggest beef between the two coaches deal with the 2015-16 National Duals.

The National Duals are like the BCS system for collegiate wrestling. The top-5 non-Big Ten schools are supposed to take on the top-5 Big Ten schools.

Iowa was supposed to take on Virginia Tech. That didn’t happen.

Instead, Dresser and the Hokies got the Michigan Wolverines. After that, Dresser went onto a podcast and called Brands and Iowa “oranges,” along with some other comments. With the hire of Dresser, the Iowa State-Iowa rivalry gained a much-needed spark.

Dresser knows that if Iowa State wants to get back to competing against Iowa on a yearly bases, it starts with recruiting. During his time at Virginia Tech, he landed six classes in the top 11, including a 2013 group which that ranked No. 2 according to Intermat.

“USA, I hope,” Dresser said on what he anticipates his recruiting base to be at Iowa State.

The new head man of the Cyclones won’t officially take over until the end of this season. During that time, Dresser will be out recruiting and trying to get back the prospects that asked for their release when former head coach Kevin Jackson announced he was resigning.

“I’ve been on the phone the last couple nights with all seven of them,” Dresser said on talking to Iowa State’s 2017 recruiting class. “Five of them are rock solid Cyclones, I think. One is probably on the fence and I am going to try to push him off the fence in a couple days. There is one more that (Iowa State) probably won’t have.”

But what Dresser vows to have is a spirited — and competitive — rivalry with the school he formerly starred at: Iowa.

The Iowa State-Iowa dual has seen its share of crazy happenings. Dresser remembers seeing the Cyclones claim a win thanks to a heavyweight upsetting Iowa’s back in the 70s. He also remembers during his senior year at Iowa when Iowa State upstaged a Hawkeye team filled with five national champions in Ames.

“That needs to come back,” Dresser said on the Iowa State-Iowa rivalry. “It’s one of the greatest rivalries in college wrestling.”

CFTV: Kevin Dresser on why he took the Iowa State job