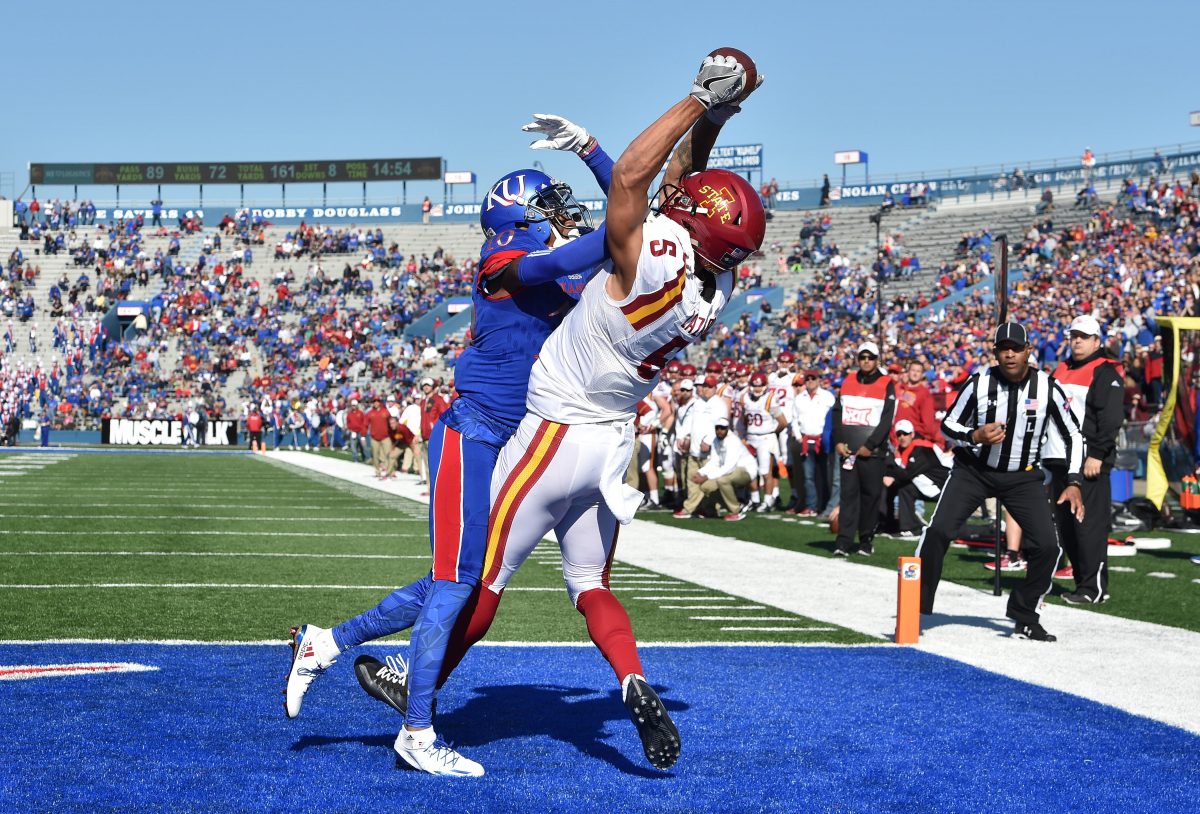 The Cyclones scored 15 unanswered points during the third and fourth quarters to knock off the Kansas Jayhawks (1-9, 0-7 Big 12) 31-24 on Saturday at Memorial Stadium.

True freshman running back David Montgomery was the workhorse for Iowa State all afternoon carrying the ball 24 times for 169 yards, the first 100-yard rushing performance of his college career. Senior tailback Mitchell Harger added 58 yards and a touchdown on eight carries, with almost all of them coming on the drive that started Iowa State’s 15-point run late in the third period.

Junior receiver Allen Lazard finished with 120 yards and a touchdown on 10 catches, most of them coming from sophomore quarterback Jacob Park, who completed 20-of-26 passes for 205 yards, two touchdowns and one interception.

“It wasn’t easy today and it certainly wasn’t pretty,” Iowa State head coach Matt Campbell told the Cyclone Radio Network. “I told this to our kids afterwards, I thought this was a real test to the resolve of our kids. I think the reality of it was we had some seniors really stand up in some critical situations today. Really gave us some momentum and really dragged everybody with them.”

The Cyclones jumped out to an early 3-0 lead on a 23-yard Cole Netten field goal, taking advantage of a muffed punt by the Jayhawks early in the first quarter. Kansas answered back to a take a 7-3 lead with a 13-play, 88-yard drive capped by a seven-yard touchdown pass from Carter Stanley to Simon Sims, Jr.

The Jayhawks stretched their lead to 14-3 early in the second quarter on a one-yard touchdown run by Taylor Martin. Iowa State would get back within one score before the halftime break when Park connected with Lazard on a back-shoulder fade in the end zone from four-yards out, making the score 14-10.

“I thought those two connected on some critical plays in some critical situations, which is good to see,” Campbell said. “Those two guys are guys that have to execute for us to play well offensively and I think they’re starting to kind of hit their rhythm and stride together, which is great to see.”

The third quarter of the game was back-and-forth with Kansas striking first on a 37-yard Matthew Wyman field goal a little more than four-minutes into the half. On Iowa State’s next drive, Park found freshman receiver Deshaunte Jones for a 12-yard touchdown pass, Jones’ sixth touchdown catch of the season, but a mis-handled snap caused the PAT to fail.

“I think a collective effort at (running back) today,” Campbell said. “Obviously, that’s a good thing. I think that’s something that we should all be excited about to have four guys that can all really be factors for us. I think all four did something really good today. David, obviously,  got the bulk of that which is great. Mitchell Harger’s presence was outstanding. Kene (Nwangwu) had a huge, huge third down catch, so I think a lot of positive from that group. When the o-line’s blocking, that group is allowed to stand out a little bit.”

Iowa State took the lead back for good with 12:03 to play in the fourth quarter when Joel Lanning plowed through the line for a one-yard touchdown run. After a failed two-point conversion, the Cyclones were in control 28-24.

Netten connected on a  37-yard field goal with 2:48 left in the game to close out the scoring. A Jomal Wiltz interception with 2:08 on the clock sealed the win for the Cyclones.

Iowa State finished the game with 458 yards of total offense compared to 415 yards for the Jayhawks. The Cyclones averaged 5.2 yards per carry while rushing for 238 yards in the game and 154 yards in the second half.

“I think the one thing about this Cyclone football team is they haven’t quit,” Campbell said. “The season in terms of winning and losing hasn’t (gone) how it wants to and sometimes when that happens at 18-to-22-years old, it’s easy for them to go a different direction. Again, I think the credit has to go to our senior class. I told our kids after the Oklahoma game, I refuse to quit on this 2016 team. This group is laying a foundation for the future to come. We still have a lot of football left and I think that’s what’s exciting for me. You take the positives, you learn from the negatives from today and you get ready to rock-and-roll next week and it’s going to be great to come back home for our last two games this season.”

Iowa State will come back home for its last two games of the season against Texas Tech and West Virginia.