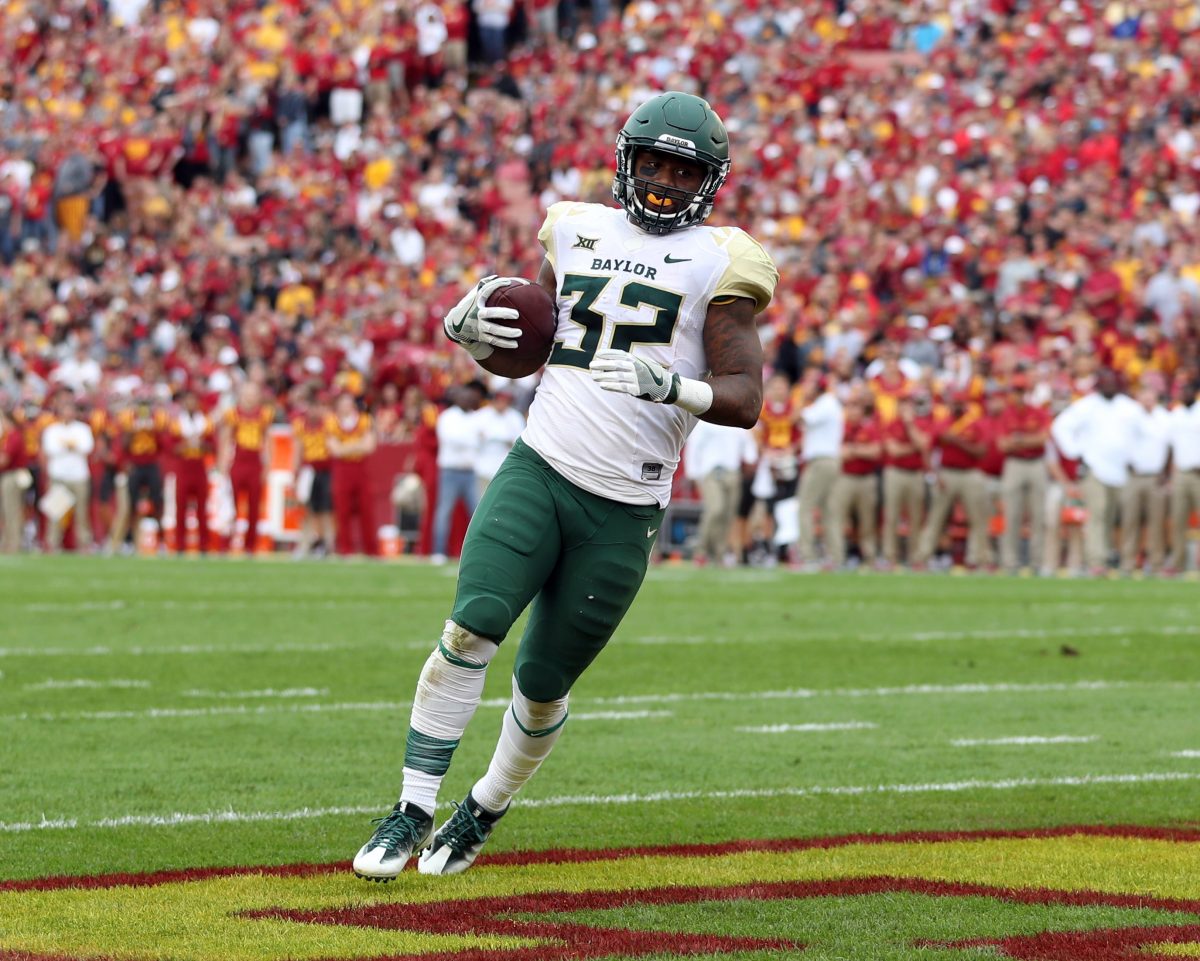 AMES — There were roughly 14 minutes left on the clock when a Baylor defender jumped across the line of scrimmage prompting Iowa State center Brian Bobek to snap the ball. He was trying to catch the Bear defender offsides and get Iowa State, which held a 42-28 lead, a free play.

Meanwhile, the ball was rolling past Iowa State quarterback Joel Lanning — forcing him to dive on it for a loss of seven. The Iowa State sideline was looking for the flag and so were the players on the field.

Iowa State was forced to take a timeout in the confusion. Two plays later the Cyclones punted the ball to Baylor, who then marched 86 yards in 2:03 to pull within one score.

“There was a guy offsides,” Iowa State head coach Matt Campbell said. “There was — and I don’t know if that guy got back or not. The officials said that he did. Hard for me to evaluate that and judge that without seeing the film. There was a guy definitely, clearly offsides, but did that guy get back in time? That’s probably the question there and I don’t know the answer to that. Obviously the officials said he did.”

The no-call wasn’t the reason the Cyclones lost the game, but it could be pinpointed as the moment when the air came out of the potential upset of the No. 13 Baylor Bears.

Iowa State’s offense had been rolling up to that point. Lanning had just ripped off a run of 8 yards on the first play of the quarter and the Cyclones seemed poised to march down the field.

They mustered just seven yards of total offense after that point. It was the opening the Bears, who piled up 258 yards in the fourth quarter, needed in order to pull out a 45-42 win at Jack Trice Stadium.

“I don’t know what changed or what happened,” Campbell said. “I just think a couple guys had chances to make plays and we didn’t make them, right? That’s where, you’ve got to make those plays to win games like that and to be able to sustain that kind of momentum or success. And whether it was a mental error to whether it was a physical error, those are things you can’t do and those are things we did really well for, like you said, three quarters. So again, we’ll evaluate what that looks like and feels like, but had our chances for sure offensively to really extend the game and give (us) a chance to stay ahead of the scoreboard.”

After getting just two carries last week, Baylor running back Shock Linwood more than made his presence felt on Saturday. Linwood’s 238 yards on 25 carries led the Bears to 469 rushing yards in the game, the fifth-highest mark for a single-game in program history.

The 5-foot-9-inch, 200-pound, senior was, for lack of a better word, electric throughout the game while weaving through — and running over — the Iowa State defense.

“Baylor’s a great team,” Iowa State senior safety Kamari Cotton-Moya said. “We knew that coming into the game. Whatever they’re ranked and we just knew that they were a great team. We knew that we had to find a way to stop their star players and, you know, we played fast. We played good as a team, but Baylor’s really an elite team and they played to that level.”

Baylor’s 469 yards was far and away the most rushing yards the Cyclones have allowed in 2016. That fact leads one to think that fixing the rushing defense will have to be one of the staff’s top priorities moving forward in the season.

“My background has always been stop the run and run the ball on offense,” Campbell said. “We just didn’t do a good enough job doing that today. Like I said, a team like that really presents those kinds of issues and you’ve got to kind of pick your poison at times. Are you going to load the box and stop the run and play one on one outside or are you going to do opposite? I think we tried to mix and match, but the reality, I think a lot of it goes back to certainly what we said before, is we gotta tackle better. I think some of those big runs came out because we didn’t do a good job of tackling at the line of scrimmage. Gotta get better at that and obviously if we don’t, we’ll be sitting here saying the same story over and over again.”

On a brighter note, it isn’t hard to look at this game and say it was one of the best Joel Lanning has played in Cardinal and Gold. The redshirt junior connected on 17-of-23 passes for 261 yards and two touchdowns while playing every snap behind center.

However, Lanning taking every snap wasn’t the plan going into the game. Campbell and his staff had been expecting to continue their quarterback rotation with sophomore Jacob Park, but Lanning’s play made it hard to stick to that plan.

“Just a situation where Joel got into a great rhythm,” Campbell said. “Again, Joel’s earned the right to be the starting quarterback and we wanted to definitely play both guys, but got into a really good rhythm in the game and just didn’t think it was fair to pull him out at the time. Nothing that Jacob did. You’ll continue to see enough of Jacob Park and Jacob does a great job, but I thought Joel played really well and gave us great chances to win the football game.”

Campbell said the team made it out of the game without any lasting injuries.

He said Kamari Cotton-Moya should be fine, while offensive lineman Patrick Scoggins, and a handful of others, were battling cramps throughout the game.

*** Campbell didn’t seem very satisfied with the explanation the officials gave him on Baylor’s touchdown late in the first half. Initially, the officials ruled Baylor quarterback Seth Russell had fumbled the ball into the end zone, which was recovered by Iowa State for a touchback.

That call was reversed after a review revealed that Russell had crossed the goal line before fumbling the ball.

“That was frustrating a little bit too,” Campbell said. “My point was it did look like the ball was out before anybody fell on it, which our guy did. And the reality of it is they said the guy had crossed the goal line. My frustration with it is their explanation of it was their knee was down and how can then the ball cross the goal line? I’m still in a quandary about it, but I guess we’ll look at it, we’ll evaluate it.”

*** Baylor head coach Jim Grobe made it clear he thinks Iowa State is headed in the right direction during his postgame press conference.

“Let me start out, I would like to say how impressed I am with Matt Campbell and the Iowa State kids and coaching staff,” Grobe said. “What a great, great plan they had coming in. In the first quarter they had us struggling on both sides of the ball. I thought offensively with their motions and their trades and the things they did that kept us off-balance. I can’t say enough bout how hard their kids played today. This is one of those games where I’m absolutely tickled to death to win, but my heart goes out to those guys because I don’t think they could have played any harder today. I watched them on film and I tried to tell our players, from their first game to their fourth game, you could see improvement every week. You could just see them get better and better and I think going forward, they’ve got the right guy here and they’re going to be a force to reckon with.”