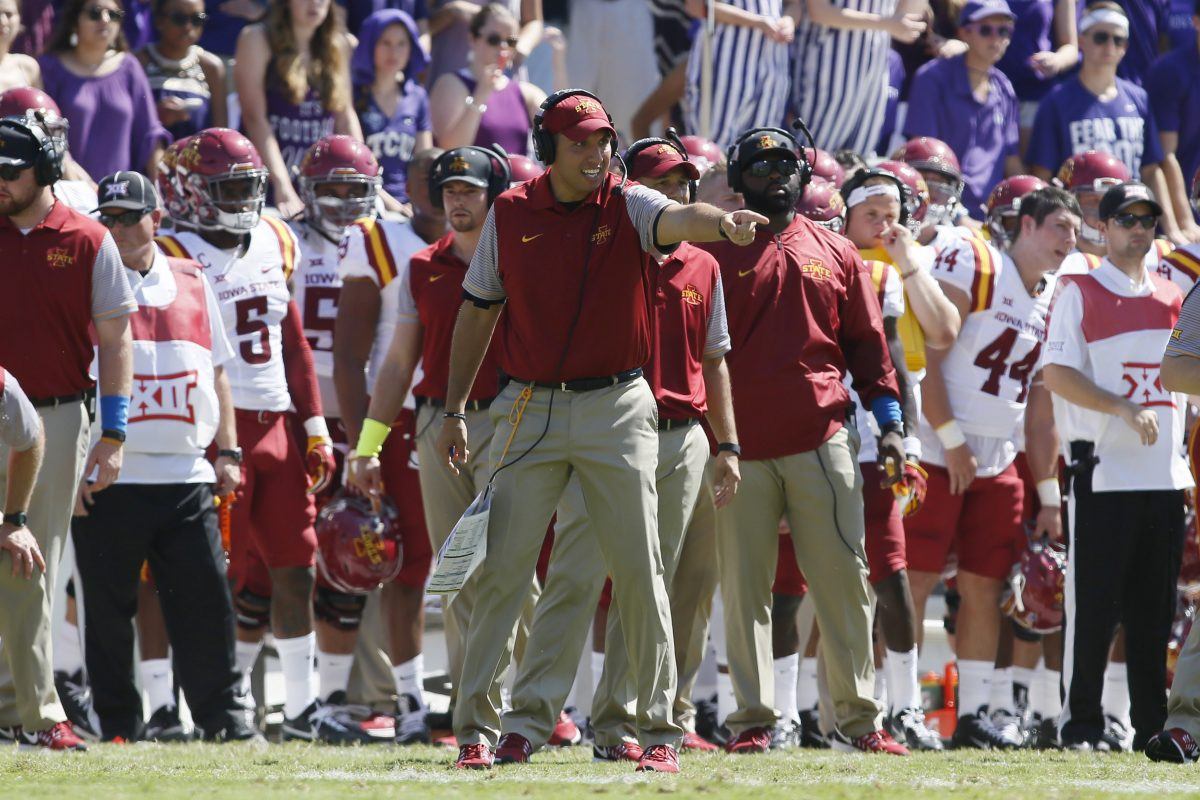 AMES — What happens in Vegas, stays in Vegas.

So what if the 0-3 Cyclones opened as six-point favorites over the Mountain West’s San Jose State (1-2)?

On Monday, Campbell’s reply to the notion that ISU was therefore “supposed to win” on Saturday (11 a.m. kick, Fox Sports Net) at Jack Trice Stadium proved to be both unflinching and enlightening.

“Winning and losing is really important,” said Campbell, whose Cyclones lost their Big 12 opener, 41-20, last weekend at TCU. “Obviously we want to go and win a football game and get that first win, but to me, it’s what (does) Tuesday and Wednesday and Thursday (in practice) look like? And can we learn to earn the right to win football games? And earn the right to feel like we had success instead of just go out and fling it around and score more points than the other team?

That day has come.

ISU remains the clear favorite — on paper, and in the sports books — against a nonetheless talented lower-tier FBS program that played in and won a bowl game (the AutoNation Cure Bowl, over Georgia State) last December.

But Campbell’s revamping of the Cyclones’ program won’t revolve around external expectations — on a weekly or annual basis. Winning at ISU depends upon beating the odds, not meeting them, and baby steps must precede the anticipated leaps and bounds.

“Again, ‘supposed to win?’” Campbell said. “I think when you’re 0-3, I don’t know if you’re supposed to win anything. From the outside looking in, I think the reality of it is, is, ‘What can we do to get better?’ And that’s the approach that we’ve taken from day one, knowing that the outcome will be predicated on what our process is.

“So to me that’s why you don’t look at those things and that’s why when you’re 3-0 or your 0-3 it shouldn’t matter. It should matter about, ‘How do I get better? How does our football team get better? And how to we put ourselves in the best position to be successful?’ I don’t think, you know, I hope our guys are certainly not worried about whether we’re supposed to win or not, because I don’t know if we’ve earned the right to feel that way.”

These are blunt and heady words — and they thankfully garble the glib go-tos of general coach-speak.

They speak to an obvious hunger for wins for a program that’s attained eight total since 2012, but also a doggedness in attending to the details that lead to achieving them.

Who knows how many games ISU will win this season. One or two? (Gasp) zero? Or maybe making some noise in a down Big 12, if the stars align perfectly?

Success is measured in multiple ways. Campbell’s currently stressing its requisite underpinnings above all else. And it seems as if the “long-haul” thinking is resonating with most of the Cyclones — even those who are engaged in their last go-around.

“As a team, we’re growing confidence a little bit and I think that definitely plays a key in how physical we play, actually,” said senior defensive tackle Pierre Aka, who — speaking of headiness — is close to attaining his advanced degree in Aerospace Engineering. “I think last Saturday what you saw and what happened is guys really took ownership and we really put up a fight. And I think that like coach (Campbell) mentioned, all four quarters, he saw our team fighting.

“Regardless of what the scoreboard said, as a team, we were trying to find ourselves and identify who we are. I think that’s going to be a slow process. Do we want it that slow? No, but we’d rather have it done the right way. You have to earn your victories and we’re slowly getting there and can hopefully get things rolling.”

Slow, steady progress excites no one, except for the would-be visionaries who can see what may flow from it … eventually.

And as Campbell’s footprint in Ames expands and drills deeper, it’s wise to remember a few plain-sense words from the late Godfather of Soul, James Brown.

“My expectations of other people, I double them on myself,” the great R&B performer reportedly once said.

Amen to that. Then and only then can one “earn” the right to success. Not guaranteed outcomes. Just a seat at the table — a chance to rise above the competition, based almost exclusively on the volume and quality of work that’s done both in private and in public.

“We don’t want to disappoint the fans,” said star tailback Mike Warren, who rushed for a season-best 95 yards against the Horned Frogs. “We have, like, the best fan base in the country. But as a team, the first win’s going to be the right step in to getting us rolling in this program and coming out to compete every time.”

That could be called, cliché alert, putting your best foot forward.

Oh, and speaking of good feet, allow me to close with one of JB’s absolute best. He crushed it not only in Vegas, but everywhere. Hit me!