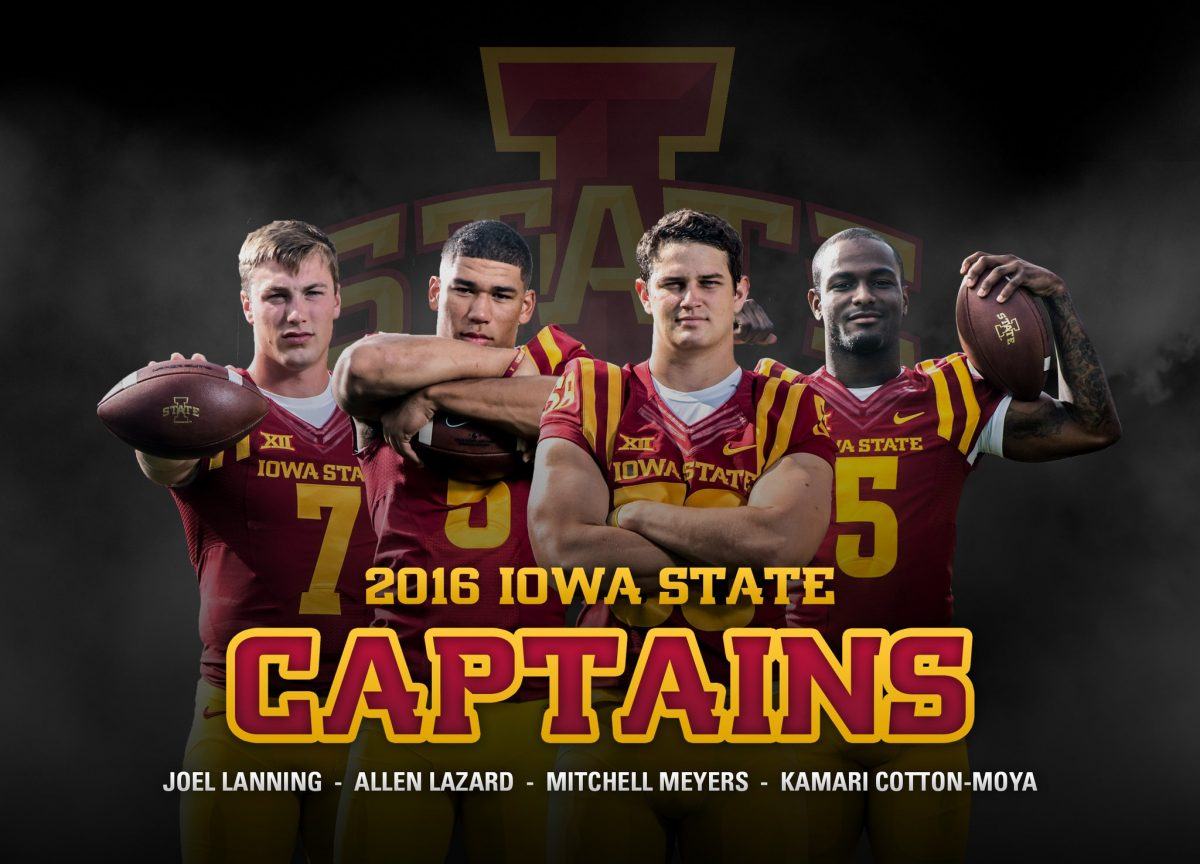 The quartet was selected by their teammates.

A native of The Woodlands, Texas, Meyers has been a leader by example and an inspiration to the team in his courageous battle with Hodgkin’s lymphoma.

In Meyers’s sophomore season in 2014, he registered 30 tackles while starting all 12 games. However, as Meyers was participating in spring drills in 2015, he was diagnosed with Hodgkin’s lymphoma, forcing him to miss the entire 2015 season and possibly his career.

Going through chemotherapy in Ames, Meyers never missed a workout, vowing to return to the field. His teammates witnessed his toughness, determination and positive attitude.

Meyers’s journey faced some bumps in the road, but he’s cancer free and ready to walk through the tunnel with his teammates once again on Sept. 3.

Lanning, who hails from Ankeny, Iowa, has quickly gained respect from his teammates and coaches with his leadership qualities. Lanning became Iowa State’s starting quarterback for the final five games of the 2015 season.

In his first career start, Lanning led the Cyclones to a 24-0 shutout of the Texas Longhorns. He ended the year throwing for 1,247 yards and 10 TDs on 107-of-193 attempts. Lanning also proved to be an outstanding runner, rushing for 330 yards and four TDs.

Lazard, a native of Urbandale, Iowa, now follows in his father’s footsteps by being named a captain at Iowa State. Lazard’s father, Kevin, was a co-captain of the 1993 Cyclone football team.

Lazard is considered one of the best wide receivers in college football. A preseason First-Team All-Big 12 selection, Lazard was named to the Biletnikoff Award Watch List for the nation’s best receiver.

Lazard was a Second-Team All-Big 12 pick by the AP in 2015 after leading the team in receptions (56), receiving yards (808) and TD catches (6). His 56 catches tied for seventh on ISU’s single-season record list.

Lazard enters his junior season with a school-record-tying streak of 23-straight games with a catch. His career receiving yard (1,401), reception (101) and TD catch (9) totals are all on the verge of ranking in ISU’s career top-10 lists.

A native of Bakersfield, Calif., Cotton-Moya is ISU’s star in the defensive secondary. The 2014 Big 12 Defensive Freshman of the Year led the Cyclones in tackles as a rookie with 77.

His 2015 season was cut short with a hamstring injury. He started in all six games played, registering 40 tackles and 2.5 TFL.