A week ago, the experts in the desert released their over/under win totals for every college football program as the season is officially less than 100 days away.

Leading up to the inaugural season in the Matt Campbell era, Vegas tabbed Iowa State’s total at 3.5.

Had you asked me beforehand, I would have guessed that number to be at around 4.5.

For that reason, I like the OVER here for the Cyclones and here’s why:

There are three games that ISU SHOULD win

Northern Iowa, San Jose State and Kansas (in Lawrence) are all games that I am comfortable giving to the Cyclones as I write this in early June.

— The Panthers have done damage in Ames before, yes, but it’s still an FCS program. Big 12 teams should be those from the FCS even on down years.

— Let’s do a quick study on San Jose State, a major upgrade in the schedule when you compare the road trip to Toledo that Paul Rhoads was dealt a year ago.

Sporting News has the Spartans finishing fifth (out of six) in the Mountain West’s West region. Despite the fact that quarterback Kenny Potter might be the best that the Mountain West has to offer, Vegas only has San Jose State’s win total at five.

This game makes me way less nervous than UNI.

— Kansas is going to be horrible again this season. It’s a game that Iowa State should win.

Simply pull off one “upset” to hit the OVER

If the Cyclones take care of business in the three games that most anticipate that they should, you’re looking at having to win ONE of the following games that I have tabbed as winnable (and honestly, I probably could have thrown a home game with Baylor in there too but let’s be conservative):

At Iowa: The Hawkeyes are early 15.5-point favorites here and I anticipate that they will win, but this is a rivalry game where crazy things happen.

At Texas: Should we really trust that Charlie Strong will have this offense doing much of anything in 2016? I don’t. Iowa State fares best against Big 12 teams that don’t score 40-plus points regularly. Because of that, the Cyclones should have a chance in this one.

Kansas State: I actually think that Iowa State will be favored here and that the Bill Snyder magic is gone. I still get nauseous thinking about how last year’s trip to Manhattan ended.

Texas Tech: The Red Raiders will be a slight favorite but with the style of ball we are anticipating Matt Campbell will bring to Iowa State, I do like the thought of a home game against a traditional spread team from Texas in late-November.

West Virginia: Almost an identical conversation to Texas Tech … The Mountaineers will be favored but not by much.

To sum things up, I’m confident in three specific games meaning that in order to hit the OVER, Iowa State will have to “upset” one team the rest of the way.

Another reason to feel good about this play: How many close games against good teams did this program blow over the last three seasons? They’ve been right there. Perhaps a culture change will do the truck and a little bit of luck wouldn’t hurt either.

I also don’t think that the middle to back of the Big 12 is going to be very good this year.

Is it September yet? 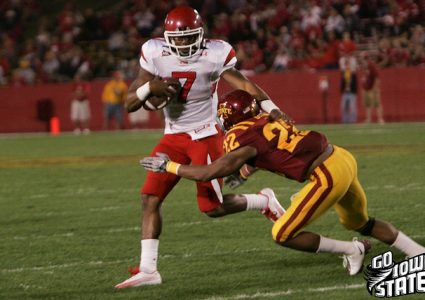