AMES — As instructed, the dextrous big man grasped one end of the seat belt, then the other.

A long flight across the Atlantic awaited Iowa State’s Georges Niang, and a near stranger slightly anxiously settled in alongside.

A man Niang had just become accustomed to calling “coach.” A mentor he’d grow to deeply respect. A leader yearning for an opening, who’d plotted the flight’s seating arrangements long before a taxi down the runway morphed into a complimentary peanuts and pop-based summer trip to Spain that proved to be a portend of what was to come.

“There’s a little uncomfortableness,” Prohm said, reflecting back on his first-year Sweet 16-bound journey as the Cyclones’ coach. “It’s not there now.” Now there’s trust. Laughter and hip bumps. A burgeoning sense that it’s all for one, not all about me.

“This is not an easy job to come into,” said Niang, who hopes to keep ISU rolling past NCAA Tournament Midwest Region top seed Virginia on Friday at the United Center. “And he came in and took the challenge head on and pushed us to be a better team and come together and play for a bigger purpose. And to do that, you’ve really got to believe in your vision.”

That trip to Spain led to several tumultuous moments. McKay struggled on the floor at times and ISU lost to Venezuela. Odd Tweets followed. Then, a wave of suspected food-borne illness hit.

“Rabbit or squirrel or something like that,” McKay said of a wild game-based meal in Barcelona. “And they didn’t tell me until after I swallowed it. I don’t know if that’s why I got sick but I truly believe that’s why I started feeling real sick right after that.”

McKay’s doubts lingered. Finally, it all came to a head in February when Prohm decided to suspend him. The decisive move hit hard. It showed McKay and the other Cyclones something. Prohm cared. What some considered platitudes meant something. He’d sacrifice the “now” for the brightly-lit future, which now stretches across the horizon.

“His vision may have seemed unclear to some guys and me in the beginning, but you sort of piece it together on what he was trying to get out of us earlier in the season and now when you start wining towards the end, it starts to make more sense,” said Niang, who’s scored at least 14 points — and as many as 31 — in every game since the end of January. “You really start to see that we sort of have a genius coaching us because he’s so good at bringing guys together to play for each other and play for a bigger purpose and form together as a team.

"That’s the biggest thing in March. He’s been talking about March since he got here and I think that’s the biggest thing in March: Which team is going to play together as a team? And that’s what he was trying to build the whole time through the suspensions, the struggles, the losing streaks — everything. You just sort of understand that not only was he building a program for him to work with in the future, but building us as better men, to be responsible in the future, to hold each other accountable, to hold ourselves accountable. I think what he’s done for us is immeasurable.” This drama-drizzled season has come full circle. Hilton Magic heads East. It’s coming back to Hoiberg, who told Chicago media this week he’s penciled in the fourth-seeded Cyclones on the championship line of his bracket.

Prohm’s had that vision all along. It’s obviously a shared one. It could end Friday, or extend through Chicago and down to Houston.

“You’ve never seen one time this whole year — and guys could have easily done it with the media — slamming me,” Prohm said. “They haven’t done it. And when I kept seeing that happen, I just thought something good would happen.”

**** Take the Nov. 13 season opener against Colorado at Sioux Falls. Prohm was nervous. A loss was unthinkable and ISU took care of business in a 68-62 grind-the-Buffs-out win.

**** Take losing three of the first four Big 12 games. The Cyclones haven’t lost by double digits in regulation all season, but that rough patch led to social media-framed jabs at Prohm’s methods. Bluntly, was he really the right man for this pressure-packed job?

“First and foremost, coach Prohm’s philosophy is one of the best philosophies I’ve been around,” said senior Naz Mitrou–Long, who plans to be around next season after seeing this season cut short by lingering hip issues. “He wants to get to know us as people first; make us better men and then the player stuff comes. He knew that Georges was one of our leaders. The best player on our team. And he had to make sure that he built a relationship with him. He’s been doing that all year-round. His plans — it’s just not something that he walked in here and said, ‘Let me try this let me try that.’ There’s a reason he’s in this seat.”

It started in a "dungeon" at Centenary College and wound through Murray State to Spain, the Big 12 and this brutal, yet magical tournament. Quite the trek. And the one Prohm and his players shared this summer’s effects continue to deepen “the brotherhood” that was shaken by Hoiberg’s departure, but now is stronger than ever.

"On that Spain trip, man, he based that on team bonding,” Mitrou-Long said. “He wanted us to get to know him. He just wanted us to go out there and ball. Stu Nezlek got out there and got like four offensive rebounds one game, so he was just throwing some people out just for us to learn things about ourselves and go from there.”

Winning the day powered down the runway on a trans-Atlantic flight. Winning over Georges Niang became job one.

“We were learning and he was learning,” Niang said. “I think the biggest thing is we’re clicking at the right time.”

Like those seat belts as the Cyclones were bound for Madrid. After arrival, they’d embark on challenges right out of “The Amazing Race.” They’d have to work together or fail. They chose the former, but the team-strengthening strategy didn’t fully make sense until now. Whirlwind European hoops were one thing. Lofty hopes hinged on something greater.

“If you know someone’s personal background and history you’re going to want to fight for them even more,” Niang said. “It didn’t make sense at the moment but it makes sense now, where he really got to put together a team that’s playing for a bigger purpose then themselves.”

That goes for Friday and beyond. This is the moment they’ve been waiting for. Up, up and away.

“Right now we’re probably exactly where we envisioned ourselves,” McKay said. “We’re clicking at the right time and we always told people that regardless, nobody will remember exactly how things went down. They’ll just remember where you ended. Luckily, we still have a chance to end somewhere special and we’ve just got to stay focused and keep it going.” 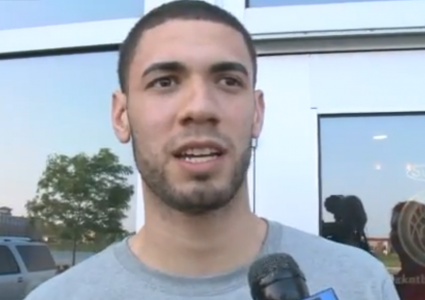