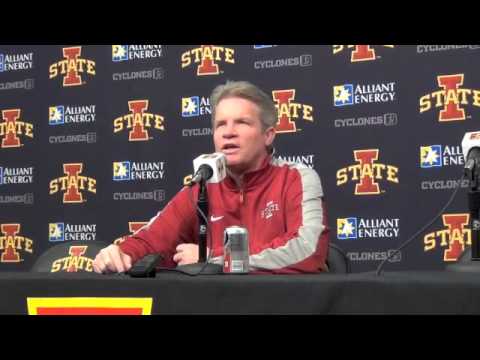 AMES — Over the past several weeks the Iowa State women’s basketball team has been looking to get over the hump. Whether that hump is picking up an overtime win, battling through an injury to their star or roster attrition, they’ve been trying to get over it.

Saturday afternoon at Hilton Coliseum the theme stayed the same. The Cyclones (11-9, 3-6 Big 12) tried time and time again to get over the hump against No. 21 Oklahoma (15-5, 6-3 Big 12). They fought back from an early deficit to build an eight-point lead during the first half.

Once the Sooners closed that gap and built up a lead of their own, the Cyclones continued to fight back. They pulled within three points on three different occasions during the fourth quarter.

In the end, the hump was too big. The Sooners left Ames with a 77-71 win handing the Cyclones their fifth straight loss.

“I think we’re playing hard,” said Iowa State head coach Bill Fennelly. “We just can’t make enough shots. When you look at the third and fourth quarter, our inability to make baskets in a game like this where the tempo was a little faster really hurts.”

It was another game in which Iowa State’s shooting did them in. They shot just 34 percent from the floor and 20 percent from deep.

It’s starting to seem like there are lids on the rims in Hilton Coliseum.

The Cyclones have had their moments when they struggle to get good looks, but Saturday wasn’t one of those days. The shots were there, the openings were there.

The shots just won’t go in.

“Until we get that cleaned up, if possible,” Fennelly said. “There’s no way for us to be successful.”

Seanna Johnson bounced back strong after a slower game (by her standards) in Wednesday’s loss to TCU. She scored 18 points (on 5-of-9 shooting) while grabbing a team-high 12 rebounds. She also went 8-of-10 from the free throw line.

Her fourth point of the game made her the 28th Iowa State women’s basketball player to score 1,000 career points.

Those numbers are the kinds of numbers that win games. That one number, 34 percent, is just killer.

“We know we’re limited in some areas at both ends of the floor,” Fennelly said. “We had a seven point lead at halftime. They came out in a zone in the third quarter. We got three wide open looks and missed them. It kind of seemed to go from there. The wrong direction.”

The Sooners threw a lot of stuff at the Cyclones defensively. They flipped each possession from man-to-man to a 1-3-1 during the whole third quarter. That’s the same quarter when OU outscored Iowa State 26-13 and the Cyclones shot just 25 percent.

It was just another hump to get over. They’ll start trying to get over the hump again when they hit the road to take on Kansas on Tuesday.

“Hopefully going on the road,” Fennelly said. “The rims will be a little kinder.”