More than that — take action.

Flint, Mich., Morris’s hometown, is in the midst of a water crisis so severe that a federal state of emergency has been declared.

How it happened forms the aforementioned long story, and two of many overviews of the situation can be found here and here.

It’s a political football, though — and this is not the space to be political.

Still, the people of Flint need help, which Morris hopes you and others will try to provide.

“Any little thing is big,” Morris said. “My mom’s there and everything. I’m just playing for her and playing for my city and trying to bring something positive back. Hopefully everybody donates like they say and we can get this water thing back going. So you can just spread the message and say I appreciate, my city appreciates it.”

Morris said he hasn’t seen the contaminated water himself, but on visits back home his mother advised him to avoid the sink and strictly use bottled water.

“I didn’t know it was that bad,” Morris said. “I’ve seen pictures of it and stuff and you know it’s not too good. You don’t want nobody growing up in that — not even adults. (Especially not) kids that go through it and kids that have been drinking it. So it’s a tough situation and I’m just trying to give my city hope. It’s a tough time and I’m going to just keep playing for my city.”

Below find some links that offer ways to help.

Here’s a link to the Community Foundation of Greater Flint.

Here’s a link to the United Way of Genessee County. 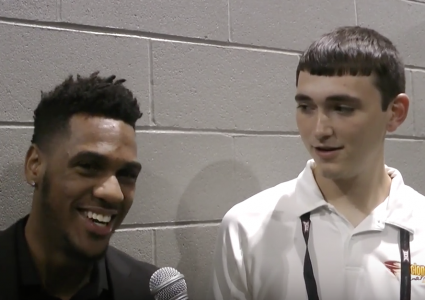 CFTV: Catching up with Monte Morris at Big 12 media day