Today is a big day.

If you are anything like me, the first Monday of the new year represents a fresh start.

Are you starting a new diet or workout regimen? Perhaps you are chasing a financial goal in 2016. Maybe you just want to be a better person.

With the new year, we all have different goals that we want to achieve. If you don’t, I’d suggest looking into it. It’s man (or woman) improvement, and we all can do certain things better in our lives, no?

I have one big new year’s resolution for the Iowa State basketball team and that’s where I’ll begin with today’s musings.

1 – This Iowa State basketball team has a reputation of looking past lesser opponents.

How many different times do we have to hear Georges Niang talk about how Iowa State “did it to themselves” in a postgame press conference?

Iowa State can put this narrative behind it in 2016.

A great opportunity lies ahead on Wednesday night when Texas Tech comes to town for an 8 p.m. tip on ESPNU.

Don’t kid yourself. This isn’t a Texas Tech team from two or three years ago. The Red Raiders are 11-1 and just handily beat Texas on Saturday. For the first time in a long time, Texas Tech actually has a Big 12 caliber backcourt and this team will win some games in league paly.

Prove it to me, boys.

That is where the resolution comes into play.

After losing to UNI in December, Iowa State has done exactly that in its three games since (wins at Cincinnati and vs. Coppin State, a road loss at Oklahoma).

Will they keep it up?

We shall see on Wednesday, in what could be a very scary game if they don’t.

2 – Deonte Burton picked up his second Big 12 Newcomer of the Week award in a row today.

When the Big 12 released its preseason awards and Burton was named Newcomer of the Year, I thought it was crazy.

In four games, Burton is averaging 13.8 points and 3.8 rebounds per while shooting a ridiculous 70 percent from 3-point range. Who’s crazy now, Williams?

3 – Should Deonte Burton start on Wednesday vs. Texas Tech?

I’ll cut against the grain and say no.

Burton has been fantastic so far and deserves all of the accolades he is getting but it’s also important to remember how early it is in the season.

Also, I love his energy off the bench (sound familiar?).

I think that team chemistry is important to keep in mind too. How will Abdel Nader be off of the bench?

I do know that Steve Prohm values his seniors and as Iowa State’s head coach put it during his Monday press conference, he plans on sticking with the current lineup.

I don’t think there is really a wrong decision here and perhaps down the road Burton starting will be the route to go. Right now, I’d like to see how the current setup plays out.

I know some folks are down on Abdel Nader right now but with a bench this thin, Iowa State is going to need him at points this year. It is way too early to give up on the guy.

Don’t give up on the guy.

4 – If anything, we should be talking about how Hallice Cooke needs to do something, anything, to become a serious part of this rotation. He played three minutes at Oklahoma and looked lost while doing so. Cooke has scored a combined five points in Iowa State’s last four games. Basically, Prohm is playing with six players right now.

Without Cooke enhancing his game, not having Naz Mitrou-Long is really impacting this team.

5 – Onto football, where TCU’s unprecedented 31-point comeback victory over Oregon in the Alamo Bowl likely saved the “Big 12 is dead” national conversation that would have occured this week.

The Big 12’s bowl matchups were awful for the league and when the pairings came out, I honestly thought the league would win one or maybe two games during the postseason.

TCU and West Virginia (who beat Arizona State in the Cactus Bowl) saved the day for the Big 12, who went a respectable 3-4. It wasn’t exactly an impressive slate but a respectable one for sure.

The Iowa State women beat Oklahoma State on Saturday by a final of 49-42 in a game where the Cyclones shot 22.6 percent from the field and only made 12 field goals.

Did you know: That in the history of Iowa State women’s basketball, the Cyclones have never won a game shooting under 30 percent from the field.

Iowa State is 2-0 in league play before traveling to Texas on Wednesday.

8 – Kansas is No. 1 in the most recent AP Top 25. Oklahoma is the nation’s top-ranked team in the USA Today Coaches Poll.

The two will tussle tonight in Lawrence (8 p.m. tip on ESPN). The Jayhawks are a 6.5-point favorite.

Gun to my head: I’d take the Jayhawks to cover.

9 – Joe Lunardi has Iowa State as a 3-seed in his latest “Bracketology.” Meanwhile, Jerry Palm from CBS has the Cyclones as a 4-seed.

Of the two, I’d argue that a 3-seed is more likely. Let’s say the Cyclones go 12-6 in league play, their RPI would likely still be in the top 10.

10 – Jared Stansbury and I will be recording an #AskCW podcast tomorrow morning.

Got a question on Iowa State football, basketball or anything else? 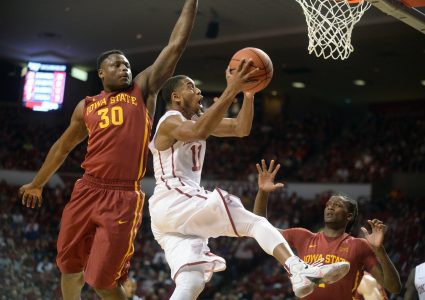