“My thoughts were, I need to start chipping this ball away and dividing it up between all the defensive players and the defensive coaches,” said Burnham, who led the Cyclones to their third shutout in seven years. “And they know that. I told them that. It was a great moment for our players to do that and I felt so proud for them. You know, they’ve persevered and come out and did a great job.”

The shutout of the Longhorns helped validate ISU’s switch from a base 4-3 defense to a more versatile 3-4 front. The Cyclones (3-5, 2-3 Big 12) struggled at times against three of the nation’s top offenses in losses to Texas Tech, TCU and Baylor, but routinely filled gaps against run-heavy Texas, forcing it to try to mount an aerial assault, which failed to launch.

“I was kind of amazed at times,” said Burnham, who hopes to help craft a winning game plan for Saturday’s 6 p.m. Big 12 game at heavily-favored No. 14 Oklahoma. “I looked at their athletes and gosh dang — they’re pretty good and we were doing well. It was focus and determination that led us do that.”

Credit Burnham’s Swiss Army knife approach to the defense in 2015 for turning past weaknesses into renewed strengths. It’s also a big reason why previously unknown players such as J.D. Waggoner — who ascended to the top of the depth chart this week at left end — have started making plays in the open field.

“He’s a hard working kid,” Burnham said. “He’s crazy. Besides (linebacker) Levi (Peters), he might be the most crazy guy on the team. Really — he’s always going on with something, Jumping. Tons of energy. And he practices. I think this defense has helped him, like it has a lot of people and he doesn’t have as much to do. He doesn’t have as many things to react from. He’s down in the trenches, head up on that offensive tackle every snap just about and he’s learned to play and survive there with technique and great energy and effort.”

Waggoner, a 6-3, 250-pound redshirt sophomore from Dallas, is tied for the team lead in quarterback hurries with three. He fits Burnham’s “focus and determination” blueprint perfectly.

“In my position, I’m undersized, definitely,” said Waggoner, who entertains teammates with spot-on impressions of Burnham, Rhoads, defensive line coach Stan Eggen and others. “But you’ve got to be a man in the trenches. That’s definitely what I’ve learned to be as far as playing on the edge, playing a couple feet inside. It’s been key to me to really just focus on my keys and just playing as hard as I can and just doing what I’m supposed to be doing every play.”

Waggoner relies on effort and athleticism to countervail his lack of size. Speed and strength stand as pillars of the 3-4 scheme, allowing players to flow to the football, often in groups.

That gets harder against a balanced offense like Oklahoma’s. Quarterback Baker Mayfield picks apart defenses with patient precision. He’s thrown 24 touchdown passes to five interceptions. The Sooners (7-1, 4-1) throw for 329.6 yards per game while also running for 202.9 and have outscored foes 180-34 since a shocking 24-17 loss to the Longhorns four weeks ago.

“In a league that has three undefeated teams sitting at the top of it, it’s easy to make the argument right now that Oklahoma is playing as well as any of them,” Rhoads said.

There’s the next challenge. Game balls are hard to come by against Oklahoma, which hasn’t lost to ISU since 1990. But Burnham’s approach will remain the same: Drill hard on the basic concepts, then sprinkle in new elements as understanding expands. It’s a never-ending process — like the hoarding of game balls. Burnham’s “shelf” boasts a lot of them, including several from Florida State, where spikes driven through the hearts of baseballs were symbolically used to commemorate stellar defensive efforts back in the day.

“They’re special,” Burnham said. “I don’t care how old you are.”

Nor how young. Waggoner shared an excellent impersonation of Burnham with reporters Tuesday night. We all laughed. Then he shared the following: 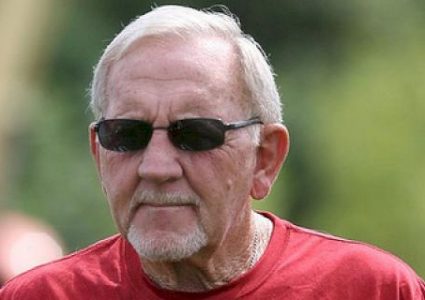