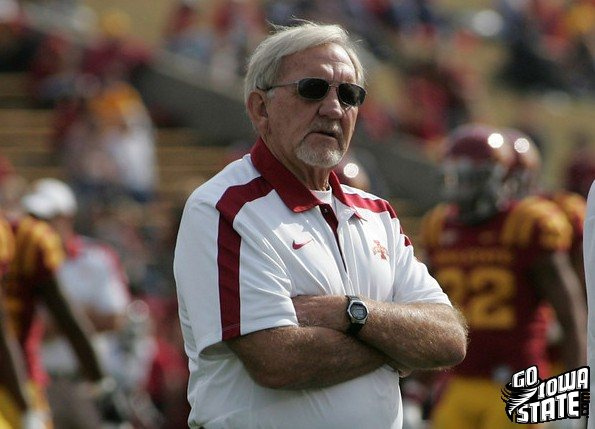 Iowa State defensive coordinator Wally Burnham filled in for Paul Rhoads on the Big 12 teleconference on Monday morning. Read the transcript below.

Q: For the last couple of weeks, the defense has taken a big step forward. What do you think the reason for that has been?

WB: I think that it is just the program, the progress we have made with these kids in the system. They’ve learned the system and a good game plan as far as execution and what we are trying to do. They have been focused in and I think that it is a lot of things that go into growing with a team. Our secondary is experienced. Our linebackers are experienced. We have some guys up front who have played a lot of football. I think all of that goes together with preparation and trying to win football games.

Q: On Saturday, your defensive backs rotated quite a bit. You played a lot of guys. Can you comment on the depth that you have there?

WB: We were kind of forced into that situation with the injuries that came up. Those kids have gotten a lot of work since camp started. They have just not had a chance to show what they can do. Both of those kids went out there and performed in a winner way. They didn’t hurt us. That’s what you have to do. Even when times come, you have to be able to do it. We have been building that depth all along this fall and they get a lot of reps in practice and hopefully when they get their chance, they perform and they did.

Q: After watching tape from Saturday’s games, what were some things about Kansas’ offense that jumped out at you?

WB: Kansas has good running backs. They run the bally really well. We knew that going into the game that it would be a good matchup for us as far as our talent against their talent. They ran the ball hard and they had a good game plan for us. They showed us a couple of good things, different things that we needed to make adjustments to late in the first half. In the second half and at halftime, we needed to make some adjustments. They did a good job of running the football straight at us. That was really what stood out at us in our mind.

Q: If you had a chance to watch the Kansas State/Oklahoma State game, is there anything that you noticed from that game that you guys might be able to take advantage of?

WB: We have taken a look at it twice already, yesterday and today. We will study that game extensively because we feel like our scheme and what they do and what we do are very similar. We’ll take as much from that as we can. Kansas State does some pretty good things on defense and we will take it and see how it fits our scheme and go from there. We’ll look at it a lot over the next two weeks.

Q: Was there anything in particular that you noticed about Kansas State’s defense?

Q: You have the bye week this week. Aside from recruiting and getting players healthy, what will be the focus on the defensive side of the ball from the bye week?

WB: We are going to go back to work tomorrow. Today is a regular off day. We’re going to have some work against our offense. We’ll work against the scout team. That’s kind of what we do every week. We are going to practice good against good and try to get better with the things that we do. We’ll get some scout team work against Oklahoma State. We don’t want to just jump in and do everything against Oklahoma State right now. It’s too long. The kids lose interest and things like that if you do too much. We’ll split it pretty well evenly and try to get our football team better.