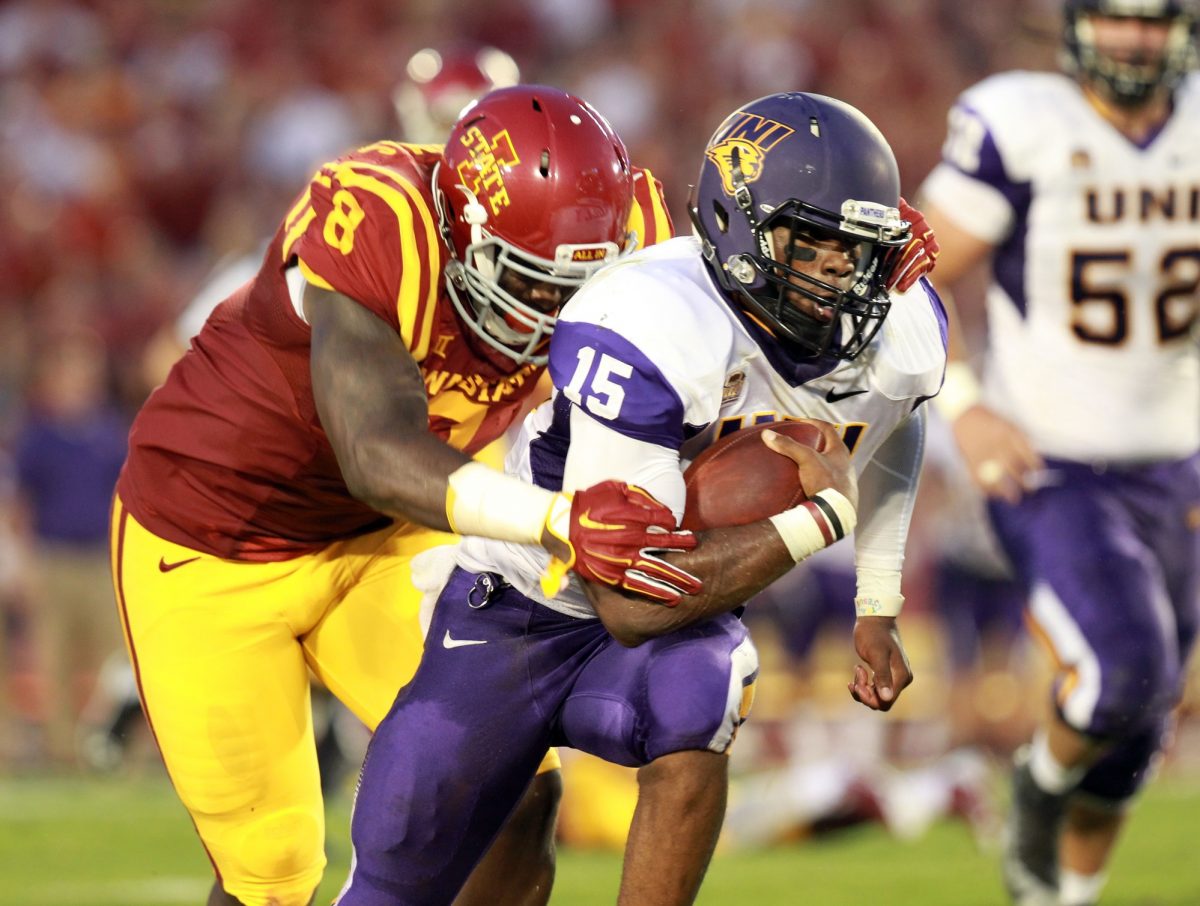 AMES —  Jhaustin Thomas knew where he needed to improve the most once he stepped foot on Iowa State’s campus.

Mission accomplished — mostly. Thomas, a 6-6, 265-pound former basketball standout, powered through two offensive lineman to pounce for his first career sack in Saturday’s 38-13 win over Kansas. He did it while part of a three-man rush, with no blitz help. Thomas stunted and broke free, driving Jayhawks quarterback Montell Cozart to the ground.

“He ran right into my lap,” Thomas said. “Pretty easy.”

“When I first got here, three plays and I’m tired,” said Thomas, who totaled four tackles Saturday. “Now I can go real long.”

Still, he has work to do.

“I don’t think I’m where I need to be,” Thomas said. “Shape-wise, I’m good. As far as getting better, I know I can get better,”

He’s already come a long way. An exhausted Thomas famously puked during the Cyclones’ first practice this fall. By week two, Cyclones coach Paul Rhoads had determined the team needed him on the field more and made sure that happened.

“I think he’s getting there earlier,” Rhoads said when asked about Thomas’s performance with respect to initial expectations. “This is just game four, so we’re third of the way through the regular season and I would argue he’s showed up more in the last two games. I’d say the first game he got his feet wet. Second game he started showing me enough that I started to tell coach (Stan) Eggen, ‘Hey, let’s get (No.) 8 on the field a little bit more.’ Last two games, he’s started to make plays.”

Through three games, ISU quarterback Sam Richardson had yet to complete a pass to a tight end.

By design, he connected three times with tight ends Saturday — two to Ben Boesen (for 12 yards) and one to Justin Chandler (30 yards).

“We thought we’d get things open in those kinds of (12- and 11-) personnels, but we’ve been joking about it all week,” said Richardson, who tossed touchdowns 43 and 44 of his ISU career — to become No. 2 on the all-time chart. “I felt bad for Ben and Justin. I was kind of making sure to get them a couple catches this week, so they definitely made the most of the opportunities they got.”

“He’ll be back with us against Texas Tech,” Rhoads said.

Warren’s 175 yards on the ground were the most for an ISU player since Ryan Kock totaled 179 on Nov. 18, 2006, against Missouri. … Brian Peavy (10), Reggan Northrup (5) and Qujuan Floyd (9) set or tied single-game career highs in tackles. … The Cyclones allowed just 38 rushing yards, the least they’ve yielded since limiting Texas Tech to 29 on Oct. 6, 2007. … Richardson became the third ISU quarterback in history to complete at least 500 passes. He’s at 513 now. … Special teams standout Josh Jahlas notched four tackles and walk-on running back Mitchell Harger rushed five times for 29 yards in his first career attempts.