AMES — At Iowa State football media day, Jhaustin Thomas told our Rob Gray that he wanted a coach that would get in his face. Thomas craved a leader who wouldn’t allow him to slack off.

He found that at Iowa State and in ISU defensive ends coach Stan Eggen.

“I think he picked the right place,” Eggen said with a laugh after practice Monday night. “We ask the question about a junior college player, they’ve got to be coachable. These programs that we’re taking our players from are real good. They’ve been coached. They’re well disciplined. Jhaustin’s been that and you can see him grow each day because of it.”

The 6-foot-6, 265-pound transfer out of Trinity Valley Community College was rusty on the first day of fall camp, but who wouldn’t be after not playing football for a full year? Eggen said some of that rust has fallen off as the second full week of camp is underway.

Thomas is starting to show the talent that had schools like Alabama and Auburn after him when he was coming out of high school in 2012. Thomas eventually signed with South Carolina.

“He continues to get better everyday, and that’s what’s good,” Eggen said. “He’s starting to get comfortable with the scheme that we’re doing, and also now the calls. Obviously he needs to continue working on his technique, and that’s getting better and better.”

Conditioning was Thomas’ biggest issue when camp was getting underway, but Eggen says he is continuing to improve on that front as well.

"Getting better," Eggen said. "Surprisingly I think his pad level has been really good for a guy that hasn’t played a lot. Also, being as tall as he is he’s got good bend, he’s a great athlete and he’s going to add something to this football team."

Eggen said the guys who were already in the program have helped him move way beyond where he was when camp started. The question now is, what can be expected from the redshirt junior in his first year with the program?

“Obviously he’s a talented man,” Eggen said. “I’m hoping to see him do some big things for us.”

Cotton out with concussion

*** Paul Rhoads said after Monday’s practice that senior defensive back Darian Cotton has been out with a concussion he suffered during practice last Thursday. He was held out of the Cyclones’ first full-speed scrimmage on Saturday, and was still feeling symptoms from the concussion during physical activity after the weekend. 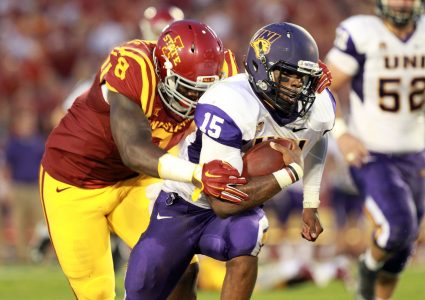 NOTEBOOK: Jhaustin Thomas on the rise, TEs targeted and more