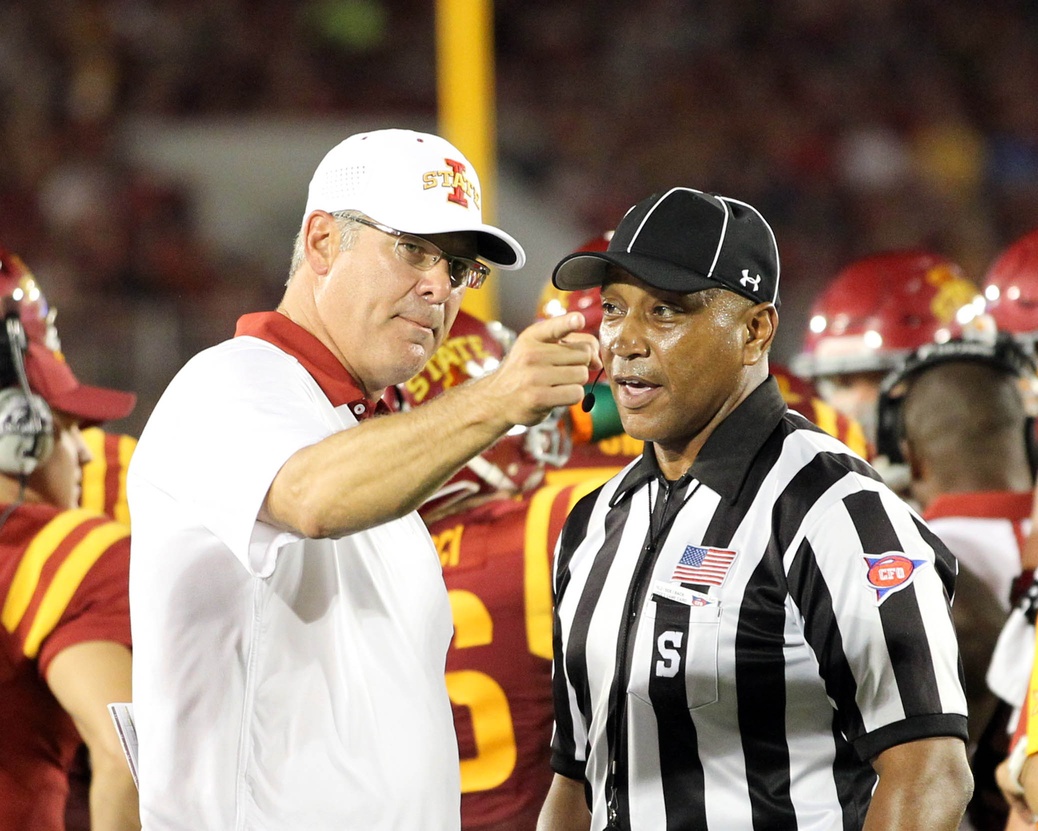 AMES – The Cyclones are a two-touchdown favorite in a Big 12 game. The Big 12 is bananas. Oh, and it’s time to seriously start thinking about basketball.

Read about all of that and more today in Monday Musings.

1 – Iowa State should be a two-touchdown (and change) favorite over Kansas. Hell, Big Ten bottom-feeder Rutgers was a 12.5 home favorite over the lowly Jayhawks last week.

What’s gotten lost in Iowa State’s discouraging 1-2 start is that even to the largest pessimist out there, this is a better football team than what Paul Rhoads has fielded the last two years – physically at least.

Will the Cyclones surpass a culture of losing and be able to mentally get over the hump? Stay tuned as the jury is still out on that one.

But Kansas? This is a Power 5 football team that is currently ranked 126th in the Sagarin Ratings (compared to Iowa State at No. 61).

Listen…I don’t think that Iowa State is Baylor or TCU but I don’t believe this team is what fans have grown accustomed to seeing the last few years either. When I posted Saturday’s spread on Twitter Sunday, the majority of reaction I got was fans being utterly shocked at this line.

I think that this is a deserving spread – mainly because of the Jayhawks more than anything.

That probably isn’t the greatest news for Rhoads though. For the sake of perception, you’d much rather be favored by a touchdown and win by double digits.

Personally, I don’t believe that will be good enough in this situation – not when it comes to saving the season at least.

For the sake of morale (within the fan base specifically), Iowa State needs to annihilate this team. Cyclone fans need something to go crazy about. Even if mopping the floor with Kansas would possibly only provide false hope for the teeth of the Big 12 schedule (which is probably the case), it’s at least still some sort of hope, which is better than what most are feeling right about now.

— Joel Lanning is now officially listed as the second-string quarterback. Placing Lanning No. 2 on paper was nothing but a formality. He’s been the true backup all season long.

— Mike Warren is now alone at No. 1 on the depth chart at running back.

— In the most interesting move of all, it appears that senior cornerback Sam E. Richardson has been beaten out by redshirt freshman Brian Peavy and junior Jomal Wiltz. Richardson has been injured for the last two games but is expected to play on Saturday vs. Kansas. However on the new depth chart, he’s backing up veteran Nigel Tribune while Peavy and Wiltz are sharing the other corner spot.

4 – Iowa State’s non-conference opponents are a combined 9-1 at this point in the season. The one loss (that belongs to UNI) came at the hands of the Cyclones.

5 – Here’s your stat of the day and also the reason why TCU won’t make the College Football Playoff: The Horned Frogs have allowed 1,178 yards over the last two games. As Dennis Dodd pointed out, in 2008, Gary Patterson’s top-ranked TCU defense allowed only 2,831 the entire season.

Texas Tech’s offense is good enough to keep them in any game. I think the Red Raiders will prove that in Arlington this weekend when they are a significant 14.5-point underdog to Baylor. I still want to see more of West Virginia before I develop a strong opinion either way.

7 – Next weekend’s Big 12 point spreads (along with a quick, raw take from yours truly):

Texas Tech vs. Baylor (-14.5) (in Arlington): Seems high to the naked eye but after two emotional games in a row, will the Red Raiders have enough gas left in the tank to really compete here?

Kansas @ Iowa State (-14.5): As I’ve already written, this spread seems about right to me for more reasons than one.

West Virginia @ Oklahoma (-6.5): I’d go heavy on Oklahoma here if the line stays under a touchdown.

Extra point: The Big 12 currently boasts three of the top five offenses in college football and five of the top 12. Check out my tweet from earlier today.

8 – Believe it or not, Iowa State will hold its men’s (Tuesday) and women’s (Thursday) basketball media days next week. That’s right. The time has come.

Here’s an invite for you guys to properly bring in the basketball season by joining us at our fourth annual Cyclone Fanatic Tip-Off Party this Thursday at Thunderhead Sports Bar in Ankeny.

We are telling people to arrive at 6 but expect our “special guests” to arrive sometime shortly after 6:30. I’ll have more details later in the week but with all expectations being that the Cyclones will be a preseason top-10 team, this is a night that you won’t want to miss.

9 –Fred Hoiberg just signed a former Cyclone to his roster with the Chicago Bulls.

10 – During his Monday press conference, Paul Rhoads was asked if Saturday’s date with the Jayhawks is a must-win. His response: “You bet it’s a must-win because it’s this week’s game.”