AMES, Iowa – The Iowa State volleyball team will start the 2015 season as a ranked squad, as the Cyclones checked into the AVCA Division I Coaches Preseason Poll at No. 21 Wednesday.

After going all of 2014 without entering the AVCA top-25, the Cyclones are ranked for the first time since the second-to-last poll of the 2013 season, when ISU was No. 25. This also marks the sixth time in program history, all under head coach Christy Johnson-Lynch, which ISU kicks off the season in the top-25.

The Cyclones were chosen to finish second in the Big 12 by the league’s coaches last week, only behind defending Big 12 champions Texas, who checked in at No. 3 in the preseason poll. The Cyclones were the only other Big 12 team to enter the top-25, but a pair of conference colleagues are not far out of the rankings as Oklahoma and Kansas were among the others receiving votes.

Multiple other Iowa State opponents appeared in the inaugural top-25 for 2015. Nebraska, who visits Hilton Coliseum on Sept. 19, are tied for No. 5. Colorado State, who the Cyclones will visit on Nov. 28, checked in at No. 12. Texas A&M, who the Cyclones take on during the Comfort Suites Challenge in Iowa City on Sept. 11, were among the others receiving votes.

The Cyclones open the 2015 regular season on Friday, Aug. 28 at 6:30 p.m. against Dayton, part of the Iowa State Challenge. On Saturday, Aug. 22, ISU will host its annual Cardinal and Gold Scrimmage, starting at 1 p.m. at Hilton Coliseum. 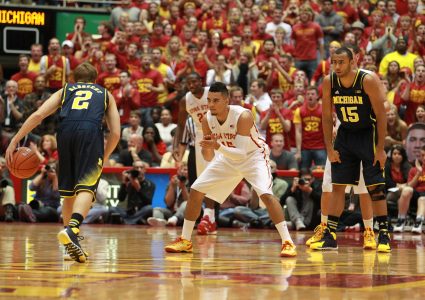