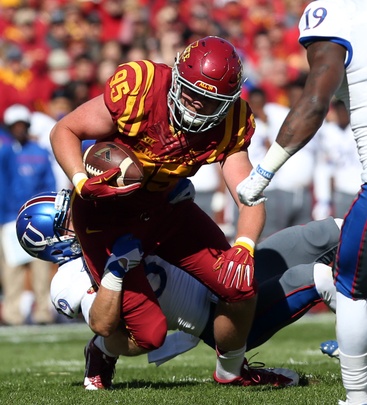 AMES — Last season, the tight end was a staple of the Iowa State offense with All-Big 12 performer E.J. Bibbs manning the position. Through three games in 2015, the tight end had essentially disappeared from the stat sheet.

Until Saturday’s 38-13 win over Kansas, a Cyclone tight end had not made a single catch on the season. This coming just one season after Bibbs made 45 catches for 382 yards and eight touchdowns in just 10 games.

But against the Jayhawks, the tight end reemerged. Senior Ben Boesen had two catches for 12 yards and junior Justin Chandler had one catch and run go for 30 yards.

“Well you go three games and you don’t throw it to them you start to build a tendency," Paul Rhoads said after Tuesday’s practice. "So getting away from that and utilizing them, not just as route runners and good blockers, but getting the ball to them and making them be productive components and making a defense respect them. We got that accomplished with what we got done on Saturday. Now we’ve got to build on that and continue to utilize them, which we will.”

Even though the tight ends weren’t lighting up the board catching passes, they were making their impact felt as blockers. Rhoads and ISU offensive coordinator Mark Mangino have raved about Boesen and Chandler’s abilities as blockers, but their disappearance from the passing game had people wondering where they went.

“We’ve been involved all season,” Boesen, a former walk-on from Dowling Catholic, said. “But not in the passing game, so it was nice to get a little bit of a reward.”

The tight ends getting involved just continues to make an ISU offense, with a few playmakers already, even more dynamic. This dynamic quality allowed 13 Cyclones to handle the football on offense in the win over Kansas.

“But we need to continue to distribute the ball evenly in our offense, or at least as close to evenly as we can,” Mangino, also ISU’s tight end coach, said. “That’s a good thing and the tight ends need to be included in that. They proved that they can be a valuable part of not just the run game, but the pass game.”

While the tight ends getting more involved doesn’t exactly mean they’ll be making 10 catches per game, it does mean Iowa State will be more difficult to defend. It also means that Mark Mangino can keep on raving about his position group.

“I couldn’t be more pleased about their work ethic and their dedication to improving as players. Those two guys have worked their tails off,” Mangino said. “They’re very coachable guys. They listen. They absorb what you’re trying to teach them. They’re very attentive in meetings and ask questions. They’re involved. So as far as just a couple of guys to work with they’ve been really a lot of fun to be around.”

*** Mangino said he got a text from Kansas head coach David Beaty late Saturday night after the Iowa State win. Beaty mentioned the play when Jake Campos lined up as the slot receiver and D’Vario Montgomery lined up at tackle. You can hear Mangino tell the story himself at the 2:20 mark in the above video.

“David Beaty texted me late Saturday night and one of the things that he said, he said, ‘I knew you were going to run down the seam with the tight end.’ He said, ‘By the time I hollered to the safety the play was already off.’ Well David, that’s kind of the idea.”

*** When Rhoads was asked if redshirt freshman linebacker Willie Harvey has met or exceeded expectations this season, he was able to put it simply.

“I would say meeting and exceeding, and then playing like a redshirt freshman at other times. There’s a lot more upside that he can deliver yet this year as a redshirt freshman. He’s a talented player. He is instinctive. He’s quick to go when he sees things. Sometimes he gets a little lackadaisical in the end result. Missing too many tackles because of that, and sometimes ending in a straight leg position, and some other things that we’d really like to see him get cleaned up. Then he’d move past meeting everything and then be exceeding in all that he’s doing.”

“Can’t say I’m excited to see five wide receivers out there. It kind of reminds me, back when I was a kid they had these little electrical football sets that you put your 11 on offense and 11 on defense, then turn the electricity on and they start jumping everywhere. That’s kind of what this is. There’s people everywhere.”

Here’s a video in case you aren’t sure what Burnham is talking about.