DALLAS — Iowa State’s top playmaker from the 2013 season went down with an ACL tear on the fourth play of last year’s season opening loss to North Dakota State. Because of that, will Quenton Bundrage be eligible for a medical hardship waiver from the NCAA?

I’ve been asked this question what seems like a million times and have never really gotten a direct answer from anybody at Iowa State. Paul Rhoads doesn’t even know.

“NCAA process is one where we can’t do anything with it until he is done with his eligibility,” Rhoads explained on Tuesday at the Big 12’s media day in Dallas. “There is a pretty hard and steadfast rule that if we choose to redshirt a player and there is nothing injury wise associated with it, then the second one is an injury and you have no case. Our case will be that it happened on the fourth play of the season when that time comes but you can’t do anything with it until eligibility is up.”

As is usually the case with the NCAA, flip a coin.

*** PODCAST: Quenton Bundrage talks about his comeback from an ACL tear ***

The thing is, Rhoads says that if 2015 goes the way that everybody wants it to, Iowa State might not even request one on behalf of the 6-foot-2 wide receiver who caught nine touchdowns as a sophomore.

“I think that a good bit of it will be determined by how he plays,” Rhoads said. “If he has a year like he is capable of and has a chance to further his career at another level, I don’t think we will even seek it. I would like to have that problem and deal with that in December.”

Let’s say that Iowa State does peruse the redshirt. When exactly would the NCAA make its decision?

“I don’t know how fast they would turn it around when our games are done,” Rhoads said. “They know expeditiously from a recruiting standpoint and numbers, you have to have an idea.” 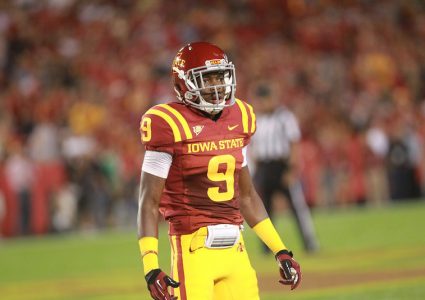