"I think everyone needs to take a step away from the ledge," Pollard said earlier tonight, according to Travis Hines of the Ames Tribune.

The burning question: Will "The Mayor" return to coach a consensus top-five team in 2015-16, or end up becoming a rookie coach in the NBA?

No answers yet on that — hence the ledge reference.

But Pollard did tell reporters, including Hines and the Des Moines Register‘s Tommy Birch, that this saga that so frays the nerves of ISU fans (again, for good reason) will likely last at least a bit longer.

“I’m not mad at him about that,” Pollard was quoting as saying in the Tribune. “I’m mad at the situation just because I’m sure (the media doesn’t) want to continue to keep talking about it, too. But it is what it is. Life will go on and hopefully he’ll be our coach, but if he’s not it won’t be the first or last time a program’s had to move forward. We’re far better suited today for that day than we were five years ago. He has done wonders for us and I hope he still is here going forward. He’s earned the right to have this opportunity.” 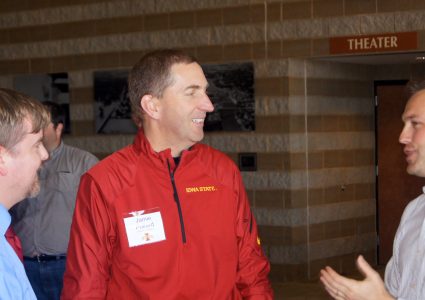