His star safety, Kamari Cotton-Moya, had just made a hit in practice, then dropped to one knee.

His body began to tremble. Practice grinded. An ambulance was summoned. It swiftly arrived. First-responders assessed the situation, placed the unresponsive Cotton-Moya on a backboard, then whisked him to the Mary Greeley Medical Center.

A heart-wrenching day Linguist, ISU’s second-year secondary coach, will never forget, even though the blue jersey-clad Cotton-Moya is back to his old self on the practice field.

“I’ve never been a part of anything that traumatic,” said Linguist, who now is busy reining in the 2014 Big 12 Freshman Defensive Player of the Year, who’s practicing under strict no-contact orders. “He’s two feet from me and you just want him to be OK. You just want him to be smiling and OK and walking and talking and those kind of things. I wan’t even thinking about football.”

“I was real nervous about it, but I’ve got great coaches, great staff and great brothers on my team and they all kept me comfortable and I just got through it with faith in God,” said Cotton-Moya, who led the Cyclones with 77 tackles last season.

His teammates and coaches kept his spirits — and weight — up in the hospital.  Words and hugs of support gave way to fast food-based forms of care.

“We got him some Wendy’s and fries one night,” Linguist said with a smile. “I think that made him happy. I’m glad he’s healthy and he’s back to full strength. He’s got a great smile, a great personality and we’re just going to get him to the fall and let him do what he does best: run and make plays for us.”

So far, he’s doing all of that, minus his trademark tackling.

Cotton-Moya’s using what’s left of spring to shore up what he considers weaker areas of his game.

“I’m still yelling at him to stay off of guys,” Linguist said. He’s like, you know those dogs, they want to go jump on things and you’ve got to kind of pull them back. The best thing is he’s getting his confidence in what he’s doing and he’s not afraid of contact right now. You’re seeing it on film and all those things.”

ISU coach Paul Rhoads has played a major role in the reining-in process as well.

“It’s hard to hold him back right now,” Rhoads said. “He wants to hit. He gets as close to hitting as he can without hitting. So if people were worried about him being gun shy, they can forget that.”

Cotton-Moya said he’s still not sure exactly what diagnosis to use to describe his injury.

He settled on “pretty much a head injury.” It’s possible his back and neck were involved, too.

Bottom line, it’s over now. All that’s left is for that blue jersey to come off, thus loosening the reins so tightly gripped by Linguist, Rhoads and others.

“Now it’s just trying to get better as a group,” Cotton-Moya said. “The DBs, we’re not losing anybody so we should be great. And that’s going to lead to our defense becoming great. I’m looking forward to seeing what (we can be) in the future.” 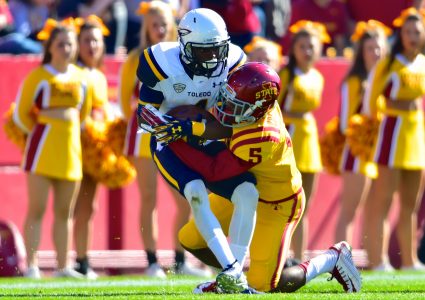 Is it true? How Kamari Cotton-Moya found out about his Big 12 honor