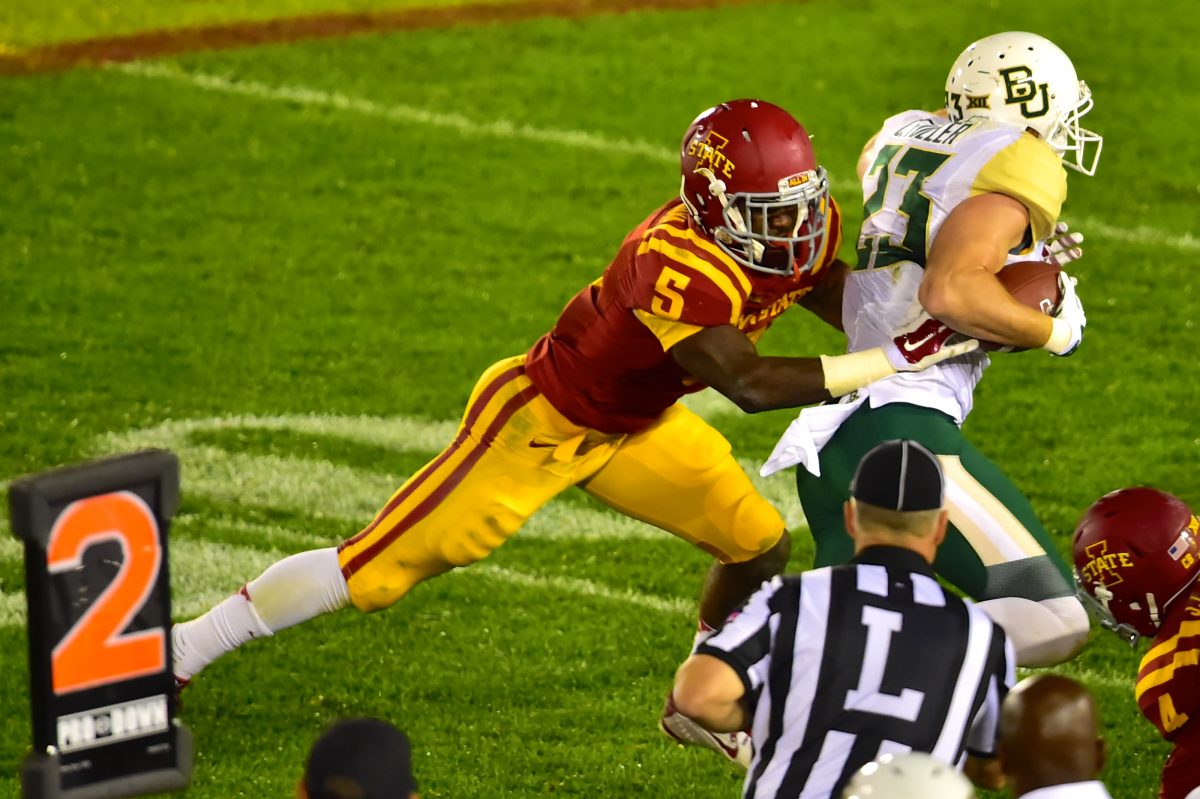 AMES — Kamari Cotton-Moya‘s eager to return to the practice field.

Doctors, however, will have the final say with regard to when the promising Iowa State safety can again be a full-go in spring drills, with more medical tests looming Wednesday, Cyclone coach Paul Rhoads said.

"He’s doing very well,"  Rhoads said of the 2014 Big 12 Freshman Defensive Player of the Year, who was hospitalized two weeks ago. "Very well, all things considered, where he was two weeks ago. He is chomping at the bit to get on the practice field. Sunday he thought he might be able to practice some today and maybe get some clearance to go Thursday, but we ran him Monday and he got a headache response to that, so we’re a little bit more tempered in that. But he’ll have a full battery of tests done tomorrow and we’ll see where we’re at.”

Cotton-Moya’s precise medial issue remains at least somewhat of a mystery. When asked if a concrete diagnosis has been provided, Rhoads said the following:

"I don’t sleep in enough Holiday Inns to give you an answer on that," he said. "I’m not going to broach that medically."

Rhoads did say "there are obviously concussion symptoms associated with" what happened to Cotton-Moya and clearly, the team and medical staff are being extremely cautious with his anticipated return.

"One day at a time," Rhoads said. "I would have said the week before spring break when it happened, that the doctors would have said, ‘Absloutely not.’ I would say right now, just gauging by how he is bouncing around on the field (in non-contact situations) and handling himself that there’s an opportunity that it might happen."

MONTGOMERY ON THE MEND

Rhoads said wide receiver D’Vario Montgomery underwent surgery to repair a knee issue a couple weeks into spring drills and will be held out of the rest of the spring.

The 6-5 Montgomery said he’d "tweaked" his left knee early in the spring, but has been doing extra running this lately while staying in shape after dropping from roughly 240 pounds to about 220.

"He had surgery on his knee," Rhoads said. "It just wasn’t healing, so they decided to go in exploratory and they found a little piece of bone and took it out and Doc want to take it slow, so he won’t be on the practice field."

Montgomery said becoming more lean was an offseason focus. The obvious goal is to produce more speed on his routes, but less weight could lead to more durability, too — especially with regard to the knee.

"It can help my speed and also in getting around people," he said." Last year I kind of struggled with some of my abilities and that was due to weight. This might help me stay injury free, too.”

Montgomery, who will be a junior this season, totaled 44 catches for 605 yards and two touchdowns last season. He had three or more grabs in each of the final seven games of 2014.