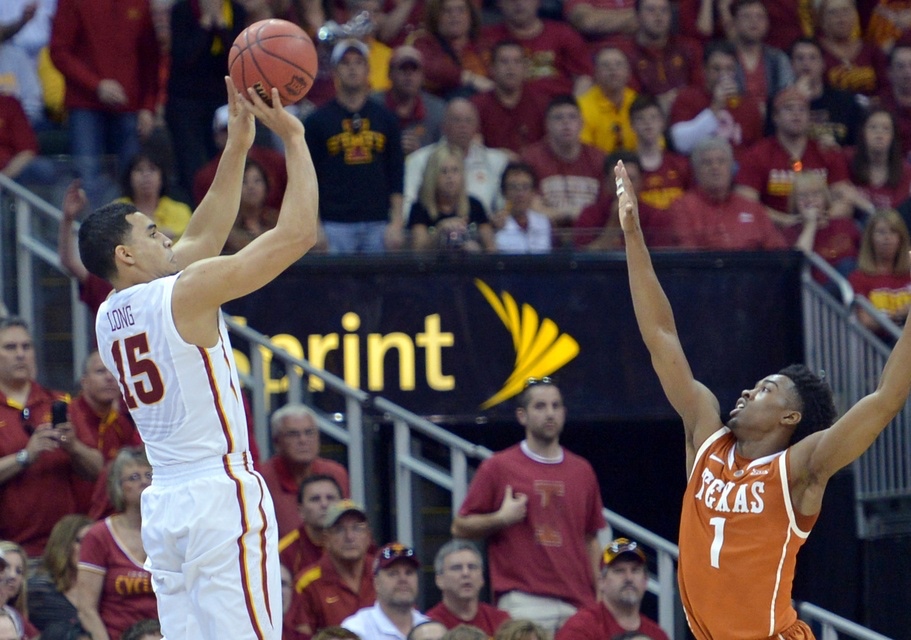 So did any Iowa State fan who paid enough attention to the play in which Monté Morris tied up Thursday’s Big 12 Tournament quarterfinal with his fourth 3-pointer — about 1:46 before he blew up the Sprint Center with the game-winning fadeaway jumper in a 69-67 thriller over Texas.

Georges Niang positioned himself for the possible game-tying 3, then ball faked to get his defender, Jonathan Holmes, up in the air. But what happened next surprised me and maybe even you. Niang — who scored 22 points while Morris totaled a career-high 24 — had cleared room for his own fairly open shot. But instead, he passed to his point guard and the rest is history.

“Complete leadership, complete unselfishness,” Long said of Niang’s choice to feed the blazing-hot Morris instead of hoisting up the shot himself. “He’s selfless. Georges could have taken that shot, Georges was knocking down shots all night. He had 22, Monté had 24. He was easily capable of doing it. But he gave it up. He makes those types of decisions. That’s why he’s our closer. He made the perfect play.”

“I guess,” said Long, who had eight points and five rebounds. “I guess they can share the title now. It’s awesome, but it takes a team effort.”

Niang said he could sense how open he was once Holmes had been diverted, but Morris was more open, so “the Closer” passed up a closing shot.

“I saw Monté out of the corner of my eye, with everybody shifting on the other side of the court,” Niang said. “He deserved that shot. No surprise that he made that.”

Morris missed one 3-pointer all night. He made four.

Then the game-winning long 2 — ISU’s third true buzzer-beater for a triumph since 2010.

“He was unbelievable,” Cyclone coach Fred Hoiberg said.”That’s as good a game as Monté Morris has played and that’s saying something.”

HOGUE DELIVERS DOWN THE STRETCH

Dustin Hogue played only six of his 19 minutes in the second half, but made them count. After struggling at times on defense, the senior shined when it mattered most.

“I was out of it for a long period,” said Hogue, who had five points and six rebounds. “But everybody was talking to me, telling to keep my head in it.”

Twenty-one seconds later, he had another chance from the corner, made possible by Niang’s pass, and swished it.

“I heard someone from the bench screaming when I got the ball the second time, ‘You don’t miss two in a row!’” Hogue said. “That type of confidence that your teammates have for you is big.”

“Huge,” Hoiberg said to describe Hogue’s 3. “He obviously had a tough little stretch there where Holmes hit a 3 and then he fell down and Holmes hit another one. He got a little bit down on himself and to put him back in there in crunch time — and not only hitting the shot after missing one, but also getting a couple steals and getting his hands on the ball was huge.”

Hogue finally turned his mind to bigger things than one shot and a handful of plays. Oklahoma looms Friday as the Cyclones continue to mount their tournament title defense.

“It’s hard winning a tournament championship two years in a row,” Hogue said. “A lot of guys are going to come and try to take your spot and there’s a lot of teams that want to win. Texas, they didn’t want their season to end so we had to get over that obstacle. We’ve got to look forward. This was a great win, but we have another obstacle. It doesn’t get an easier from here. It only gets harder.”

ISU outscored Texas 11-2 in fast-break points, but managed just six bench points. … Niang moved up to 16th on the Cyclones’ all-time scoring chart. The junior now has 1,467 points. … In notching its 23rd win, ISU has now won at least that many in four straight seasons, a new program record.

“Well, he was trying to get a head of steam.  Obviously, trying to clear it out for him to get a shot and the other guys try to rebound it.  I tried as hard as I could to stop him from getting to the basket.  He made a great move, I tried to contest it, and he made the shot.” — The Longhorns’ Demarcus Holland on Morris’s game-winner