The subject: the 2015 NCAA Wrestling Championships at St. Louis.

The not-so-hidden meaning behind the stressing of the word "five:" Total, utter domination.

"That’s all really looking forward to is controlling myself and having a good five matches," Gadson said earlier this week. "Five. Five!"

Gadson’s pre-Nationals intensity carried over to the ultimate stage, where he finished off a tour de force tournament with a pin of Ohio State’s Kyle Snyder in 4:24 to clutch gold at 197 pounds.

Gadson — who closes his Cyclone career with three all-American honors — won by fall twice, and by technical fall and major decision and decision once each. He was relentless, scoring 35 points to augment the two pins. 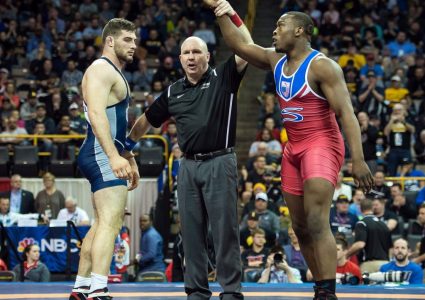