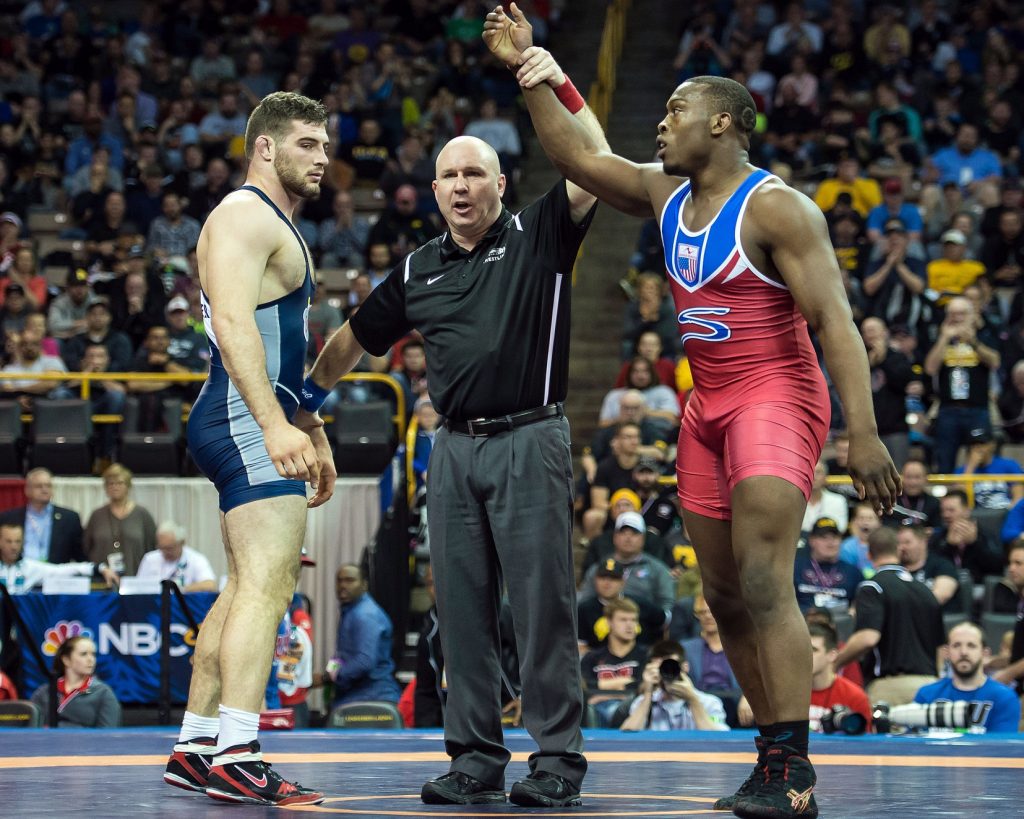 Two months ago, Kyven Gadson felt the grip of the referee’s hand wrap around his wrist as sadness, disappointment, embarrassment and extreme frustration flooded his body. One quick swirl around the center of the mat and Kyle Snyder’s hand was raised as the winner and the official World Team Member at 97kg.

That marked the sixth time Gadson lost to Snyder.

There is a lot of things that could be discussed as what went wrong for the CRT-C wrestler at Final X but it all boiled down to one thing: his mind.

“I made small mistakes in the first match. In the second match, I panicked,” Gadson said. “I don’t think there’s a bunch to learn from that from a physical point if not more a mental place.

Wrestling free can not be described, according to Gadson.

“It looks rare…If I had to give it a definition it would be sound effects,” Gadson said with a chuckle. “I don’t know if you can describe it but you know when you’re there.”

How does one get to that place of freedom?

“I don’t have it figured out, otherwise I would sell it in bottles and call it ‘Gadson’s Strong Juice,'” Gadson said. “That’s my soul focus right now. I know everything else will take care of itself as long as I am in a place of freedom when I wrestle. When that happens, I will be fine regardless of results, regardless of the win/losses. If I get to a place of freedom when I’m wrestling, I’ll be in a really good place to accomplish my dreams.”

The last time Gadson can recall truly feeling free was when he was on the verge of wrestling what was potentially his last match ever.

“At the point I was at in my senior year, after I lost at the Southern Scuffle and I got to the NCAA Championship, I felt like I was free. But at that point, I was like, ‘I’m done wrestling after this. This is it. Whatever happens, happens. I did everything I was supposed to do, everything I knew to do nutritionally, mentally, physically, spiritually and emotionally.’ I knew everything I was supposed to do. ‘I’m not wrestling after this match so here goes,’ I thought.” Gadson said. “And now we’re back here trying to find that same euphoria or best place but on a different level. You’re not in college anymore…it’s your life, it’s your job. It’s what takes care of you and your family.”

Although some might think wrestling for a living might bring on a new pressure that maybe didn’t exist when wrestling as a college student, for Gadson, there isn’t a difference.

“Real life is real life,” Gadson said. “I think I’m really good at overthinking things. I’m really good at placing pressure on myself needed or unneeded. In college, I think with my dad passing away and stuff like that, that was real life. I was still able to compete and perform at a certain level with that going on.”

Gadson has a stacked schedule for the next 14 months filled with more training which also includes being a father and husband.

“Life doesn’t stop for anyone. Nobody doesn’t have life going on for them while they’re competing,” Gadson said. “I have two beautiful daughters and a wife but I have to do my part in the equation to make a family that thrives. Maybe, that could be looked at as pressure but for me it’s a privilege to be called dad and to be a husband.”

The Iowa City native is hopeful for what the future will bring him. What has happen in the past, losses included, are blessings in the 97kg wrestler eyes.

“You’ll see stuff on social media like, ‘Oh I feel bad for Kyven,’ but for what? Why? I don’t get it. I’m doing what I love to do. I love wrestling. Nothings guaranteed. I can do everything right and there’s no guarantee. It’s never guanreteed that you’re going accomplish or win what you want to win”.

Failure is a part of success

“Today wins Tokyo,” is Gadson’s current motto as the 2020 Olympic Games are under a year away.

Gadson is taking it day by day as he hopes to get closer to achieving his greatest life goals.

“It’s not what I can do tomorrow but what can I do today?” Gadson said.

Although the 97kg wrestler’s greatest enemy right now is his mind, his mind is also his greatest asset.

“That’s the beauty and pain of life, right? It gives you a higher chance and a higher rate of success by doing everything that you’re supposed to do but that’s what scares people. That’s that crippling fear. I don’t have that question this year. I’m not looking back at 2019 and saying I didn’t make a world team because I didn’t do this. I did what I was supposed to do I just didn’t win. That’s painful. That’s why it hurts so much because you did everything you knew to do and it didn’t work out for you. That scares a lot of people away. Because it is scary. Who wants to say I did everything I could and what I believed to do wasn’t enough?”

On the journey to finding that freedom in his craft, Gadson seems to be ready to prove to the world and most importantly himself, that everything has led up to this next chapter in his life.

“If Kyle wasn’t there I’m essentially on three world teams but that’s not what makes this whole thing beautiful in my mind,” Gadson said. “It’s the trials that lead you to triumph.”