AMES — Every time Michael Moreno emerges from the pregame fog that frames matches at Hilton Coliseum, he gives thanks.

He remembers when, as a battered and weary freshman, that fog symbolized doubt.

But not in the Iowa State wrestling program he loves. In himself.

“I was pretty close to leaving,” said Moreno, a senior and two-time all-American who will pierce that fog for the last time in Sunday’s 2 p.m. Senior Day dual meet against Wisconsin. ”I didn’t think D-1 wrestling was for me after my infamous freshman year. I thought maybe I’d bit off a little more than I could chew and that dream might not come true.”

Moreno — the third-ranked 165-pounder in the country, according to InterMat — will take the mat for his final home dual meet along with two other seniors: Second-ranked 197-pounder Kyven Gadson and 157-pounder Luke Goettl.

They bled, sweat and toughened up others as the program navigated through what Jackson called “low points” — namely, the 2010-11 and 2011-12 seasons.

“It was dark,” said Jackson, whose team is 10-2 this season and ranked No. 8. “It wasn’t any fun for a few years there, but we’re wrestlers and you keep grinding. We’re going to keep grinding until we reach our goals.”

Jackson pointed to a pair of “featured matches” — ISU’s No. 3 Earl Hall vs. the Badgers’ No. 7 Ryan Taylor at 133, and Moreno vs. No. 2 Isaac Jordan — that will add big-time intrigue to an already emotional day.

“I’m sure it means a lot,” said junior 174-pounder Tanner Weatherman, who carries a No. 12 ranking into his bout. “I’m sure it feels good to them, knowing they can stick it out, they commit to something. I think it’s good.”

Moreno, who went 4-17 while battling injuries and a precarious mental state during that desire-draining freshman season, said Jackson’s commitment to him helped him keep going.

Where would he’d be if he’d succumbed to his inner demons? Not likely in school, he said.

“I probably would have dropped out,” said Moreno, who is now 86-34 in his Cyclone career. “I’m not a big scholar. But staying an athlete, that can help a lot of people. I’m getting my master’s degree now. I’ll be six credits away after this semester. Never in a million years would I have thought I would get my master’s degree.”

He and the rest of the Cyclones have come a long way. They finished 20th in the NCAA Championships in 2011 and 35th in 2012, but bounced back for 11th-place and 12th-place finishes the past two seasons. A return to the top 10 is fully expected this March as the rise back to national prominence continues.

That’s a lot, but not nearly enough. They came to contend for and win championships — and they’ll get one more chance at home to win a Big 12 title, at least, when that meet rolls around on March 7.

There won’t be fog, spotlights, or a familiar match-opening tune. Just another chance to excel on the mat. Just another opportunity to prove themselves and keep punching toward that team-wide dream.

For Moreno, Goettl and Gadson — who has won 42 consecutive duals — the ride’s almost over, but they’re speeding up.

“I think that every match becomes more important to him,” Moreno’s younger brother, Gabe (the No. 12 ranked 149-pounder in the country), said. “If you break it down, he only has 21 guaranteed minutes left in his career. Obviously, he’s probably going to get to the nationals and wrestle far, but three matches in the regular season left. So that mindset, obviously every single minute matters a lot for him.” 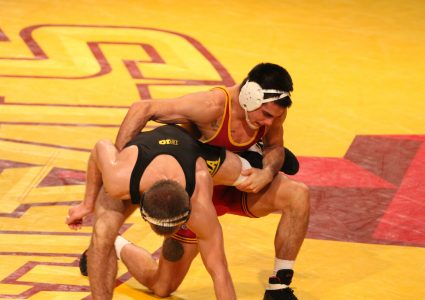