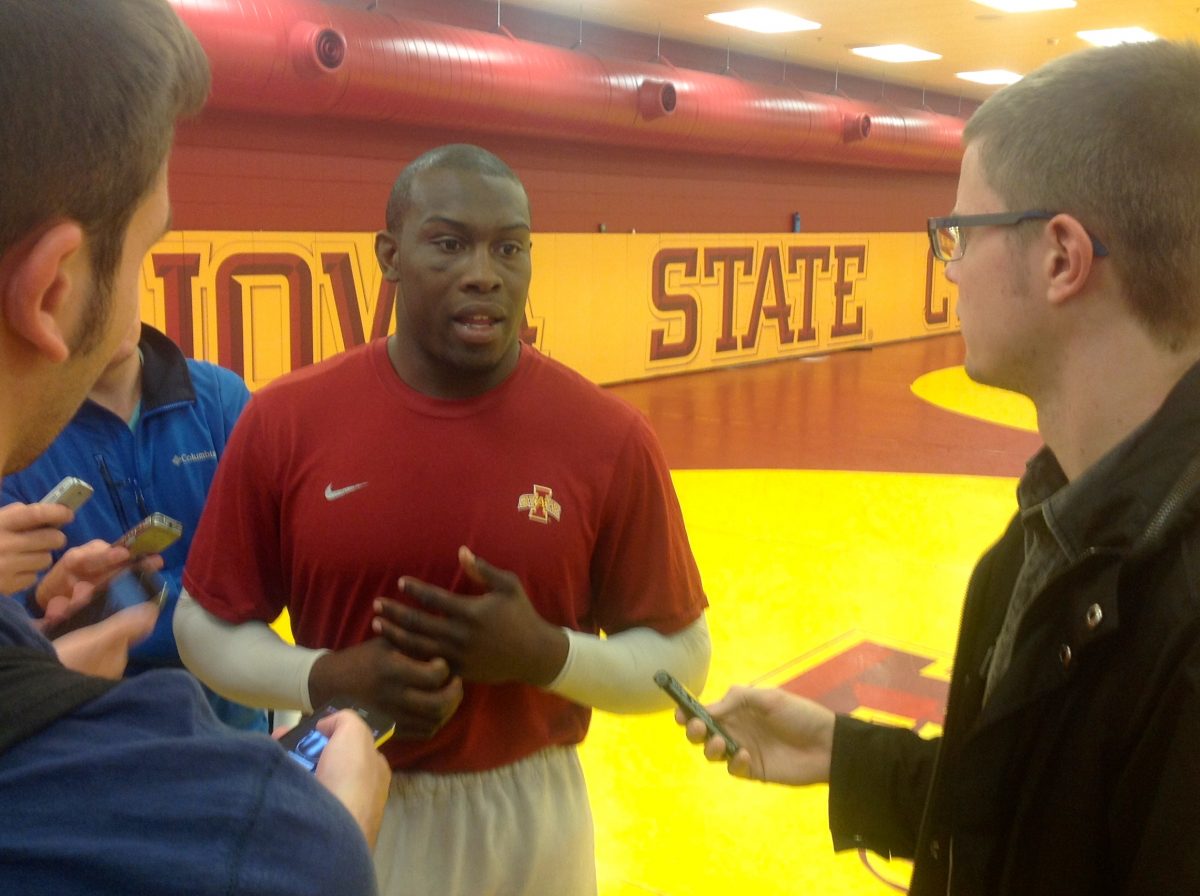 And if he’s experiencing any social media withdrawal symptoms, he’s hiding them well.

“I just think it was one of those things — I allowed it to be a distraction and the only way to get rid of a distraction is taking it completely away,” said Gadson, whose late father, Willie, also was a Cyclone all-American. “I think by doing that, I feel that I don’t have a lot of extra, outside noise, external noise, coming in. I can focus on myself. I live by myself now, so I’ve got a lot of time to reflect on me and my growing as not just a wrestler, but as a person, as a young man.”

Gadson’s maturity and dedication help fuel a room filled with similarly-minded — though still social media-connected — grapplers who seek to propel the Cyclones back into the national championship conversation.

ISU has finished 11th each of the past two seasons, but returns all six of its NCAA qualifiers, including Gadson and Michael Moreno, who earned his second all-American medal at last March’s championships.

Earl Hall, who qualified at 125 last season, bumps up to 133. Gabe Moreno, shifts from 141 to 149. Tanner Weatherman, who finished one win short of all-American honors the past two seasons, remains at 174, and Lelund Weatherspoon looks to raise his profile at 184.

What changed? A talk with his dad, Mike, helped.

“He basically told me, ‘Hey, there’s two roads you can take from here,” Moreno said of his father, who also earned all-American plaudits at ISU. ‘You can either just pack the season in and just be done with it and be all discouraged and not look forward to wrestling to the rest of your career here, or you can suck it up and look toward the positives and be excited to wrestle.’ And I think a lot of the season, I wasn’t really excited to wrestle. I was more nervous to wrestle. At the Big 12 tournament, that kind of changed. I wanted to be out here and it was fun again. I kind of re-found my love for wrestling again.”

“We think we have quite a few pieces in place to really have an excellent year,” Cyclone coach Kevin Jackson said.

The wild card for 2014-15 is four-time Iowa State High School champion John Meeks, who will be back in the lineup at 141. He redshirted last season after enduring some hard knocks as a true freshman.

Jackson said outside of spots cemented by Gadson and Michael Moreno, no one’s assured a starting position, though. He added that competition in the room has been fierce, which lends itself to sharper performances once the season opens Nov. 1 at the NIACC Kaye Young Open.

For Michael Moreno, the next step entails not just knowing he can win the title, but backing that self-assuredness up on a daily basis — and not just on the mat.

“I have to keep pushing myself,” Moreno said. “OK, I’m good enough to win it right now, but I can’t sit on that. I have to keep pursuing a higher echelon of training and then eventually competition. That will take you to the top. Knowing is only half the battle.”

Gadson knows what he’s capable of, too. He led 4-1 in last year’s NCAA quarterfinals, but let that match slip away.

“I put a lot of pressure on myself,” said Gadson, who is already enrolled in graduate school. “Unneeded pressure, I think — kind of tightened up a little bit. But that’s all done. You can move forward from it or dwell on it. I’m not planning on dwelling on it at all.”

He won’t do that in his own mind, or on his phone, laptop or any personal electronic device.

The only status updates that Gadson heeds now emanate solely from within — whether it be himself, his teammates, or the coaching staff. There’s one steely, single-minded focus and it can’t possibly be confined to 140 characters or less.