Injuries — early and late in his senior season — have hindered former Iowa State tight end E.J. Bibbs‘ hopes of making a mark in the NFL.

But his game-changing abilities remain a strength, as ESPN‘s Mel Kiper Jr. alluded to during a Thursday conference call with reporters.

"A kid who obviously has talent," Kiper Jr. said in response to my question about Bibbs. "We saw that in a lot of games this year. I’ve had him in my top ten tight ends pretty much the entire way. But he’s a late-round pick. You’re talking about a fifth- to seventh-round pick. He’d probably come in right now as the ninth or tenth best tight end available, which puts him in the late-round category."

Bibbs, who caught 45 passes for 382 yards and eight touchdowns in 10 games last season, performed selected drills at this month’s NFL Combine. He measured 6-2 and weighed in at 258 pounds and performed 20 reps on the bench press — tied for fifth among 15 tight ends who performed the lifts in Indianapolis. His hands measured 10 1/4-inches and his arm length was assessed at 31 1/8-inches.

Those numbers, coupled with some uncertainty in terms of health and downfield blocking ability, put Bibbs within a logjam of solid tight ends who could pan out in the pros, but didn’t fully wow observers at the combine.

"There’s a lot of late-round tight ends," Kiper Jr. said. "Some of these guys you thought would be third- or fourth-rounders just didn’t get the job done to substantiate or justify being that high a pick. The tight end group, as I said, very mediocre. Bibbs, though, I think can make a football team as a back-up tight end in this league and have a nice career." 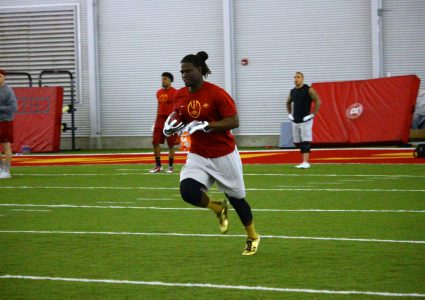