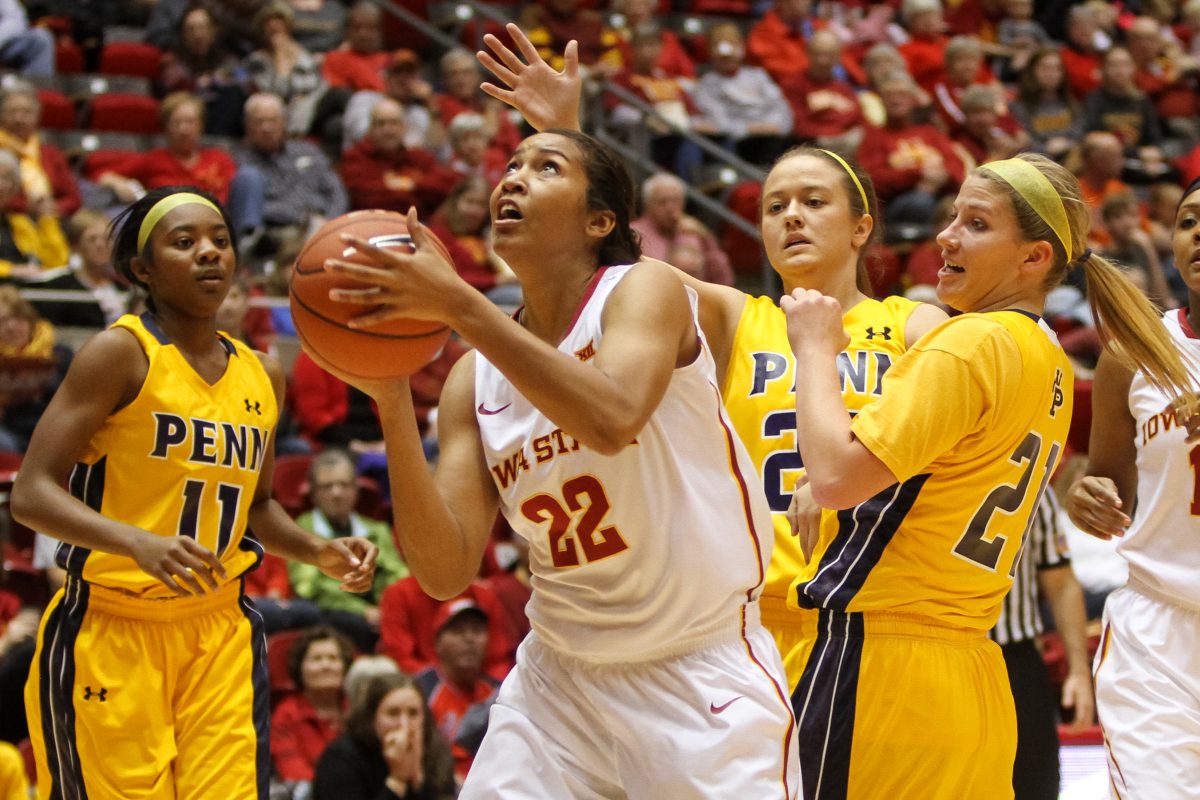 It took the Iowa State women’s basketball team nearly 10 minutes to reach double-figures in their season opening exhibition contest against William Penn Tuesday night. Leading 9-3, a 3-pointer by sophomore guard Jadda Buckley sparked the Cyclones to a 30-16 run to close the first half and helped Iowa State pull away for a 99-53 win over the Lady Statesmen.

“I think we settled in,” Buckley said about the big run. “Kind of got the nerves out of our system.”

The Cyclones were led by senior forward Brynn Williamson’s 17 points and six rebounds, while Buckley also added 13 points. That went along with her six assists and just one turnover. Freshman guard Emily Durr also added 11 points for Iowa State.

“I was pleased with the way we played,” Iowa State head coach Bill Fennelly said. “It was fun to get back out and play.”

One of Iowa State’s biggest question marks entering the game was the center position.

Freshman Claire Ricketts started the game in the post for the Cyclones and finished with eight points and three rebounds. Her freshman teammate, Bryanna Fernstrom, came off the bench to provide nine points and eight rebounds.

Despite a solid performance from both rookies, an array of questions still surround the position moving forward.

“It’s no secret, our inexperience in the post is not going to get better in one exhibition game,” Fennelly said. “It doesn’t matter who it is, any post player that goes in the game for us has not played hardly at all, if ever, at a division one level.”

Iowa State made 13 3-pointers on the night, including three each from Williamson, Buckley and junior guard Kidd Blaskowsky.

Blaskowsky finished with 11 points, two steals and three assists, while getting the start in place of suspended senior guard Nikki Moody.

“Kidd deserved that,” Fennelly said. “She probably has practiced as well as anyone, and probably a team that needs some energy, and some vocal leadership, she’s good at that.”

William Penn was led in scoring by senior guard Janay Pritchett, who finished with 13 points. Senior center Jessie Kreuser also finished in double figures for the Lady Statesmen with 11 points.

Iowa State shot just 14-of-26 (54 percent) from the free throw line. That is obviously a number that Fennelly wants to see improved.

“Our free throw shooting is awful,” Fennelly said. “As much as we shoot free throws it’s got to be better.”

“We’re lucky that in basketball you can play two practice games,” Fennelly said. “We’ll get one more on Sunday.”

The status of suspended senior guard Nikki Moody is still up in the air for the Cyclones as they head into their second exhibition contest.

“We’re going to meet with Nikki sometime later this week,” Fennelly said. “It’ll be up to her, to be quite honest with you, whether or not she sees herself doing the kinds of things that she needs to do to be a member of this team, and to be a great teammate, and be coachable.”

Moody, who entered the season third all-time at Iowa State in assists, was suspended late last week and has been away from all basketball related activities.

“Any team function, so practice, games, team meetings, whatever,” Fennelly said. “She still has all her academic services, all her medical services, all that stuff. It was strictly basketball related.”