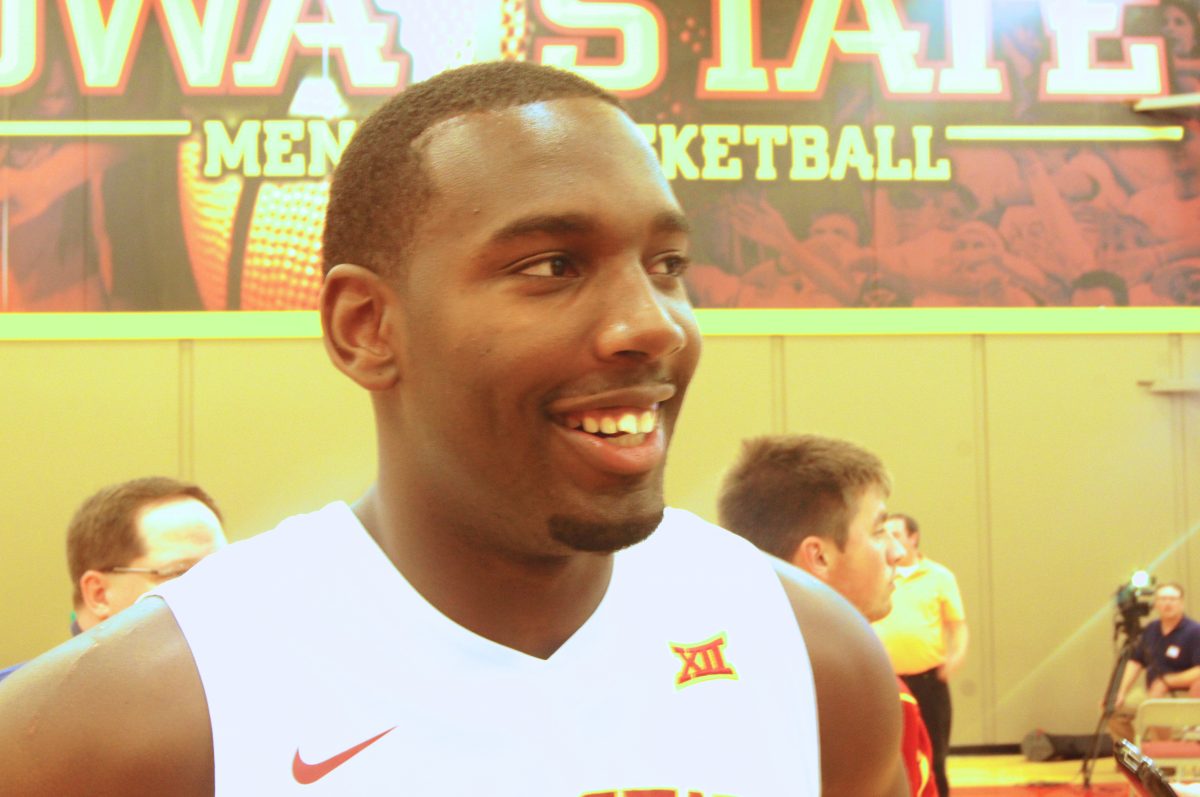 All the brilliant, bright lights would soon be switched off.

The 6-6 Yonkers, N.Y. native had just played his best game as a Cyclone, but lost.

No hometown feeling — even in the city that never sleeps — could assuage that pain.

He’d scored a career-high 34 points, but as the throng of reporters finally left in the wake of that 81-76  loss to eventual national champion Connecticut, his thoughts ineluctably drifted toward the future.

“It was pretty tough,” Hogue recalled during Wednesday’s media day. “I’d never had a game like that in my life, to actually be able to play that type of game on that type of stage against that type of opponent. I thought for sure we were going to win that game, so to actually lose the game, it was kind of tough being in that locker room. You always feel like you could have done more. I try to use that for motivation.”

Hogue hit the weights over the winter, spring and summer.

His always hard-nosed attitude merged with a newly-hardened body.

But humility trails it as a close second.

“Back home people were asking me, which high school did you go to — just common, basic knowledge questions that people in Iowa knew because I’ve been here for so long,” said Hogue, who attended Lincoln High School in Yonkers before moving on to Indian Hills Community College. “So I’ve kind of been doing the same thing all the time.”

The interest from New York City media both pleased and rankled Hogue.

He was a no-name guy out of high school, despite his brother Doug’s standout career at Syracuse and in the NFL as a linebacker for the Carolina Panthers.

Dustin Hogue was the other brother.

The lesser of two Hogues.

The guy no one cared about — a 6-6 power forward destined for small school success, or so it seemed.

A flat, austere, fresh start plotted out some 1,100 miles away in out-of-the-way Ottumwa, Ia., of all places.

Times Square it is not.

“We actually went down there and watched Jameel (McKay) play and a couple of their other guys and I remember saying to Barrett (Peery), who was the coach at the time, ‘Tell me about this Hogue kid,’” Cyclone coach Fred Hoiberg said. “He said, ‘Well, he’s probably the toughest kid on our roster.’ I said, ‘I’m going to start recruiting him.’ Shortly thereafter we offered and just really started developing the relationship. And (assistant coach) Matt (Abdelmassih) being from New York obviously didn’t hurt we were going through that process.

“We were fortunate to get him. It’s kind of a tough system to evaluate players in because of the way they press. They beat teams 120-50 and it’s all pressing and layups. But when you watched him at practice he had a solid mid-range game. The thing he did best is he showed grit and toughness and he showed an ability to rebound. The thing I’m most impressed with in Dustin is his ability to shoot the ball and his ability just to really play the role of a glue guy and do whatever it takes to win. And then last year he showed what he can do when you ask him to score by scoring 34 against Connecticut. I think he’s going to have a heck of a senior year. He’s certainly been one of our better players in offseason workouts.”

Getting to the Garden was one thing.

Getting beyond the Sweet 16’s another.

As much as Hogue reveled in his NYC roots, it’s the latter that drives him day by day, in Iowa.

“He’s the same guy,” former Indian Hills teammate and current ISU teammate Jameel McKay said. “He’s the one guy you know that’s going to give you 110 percent every day that he’s on the court. He’s going to go hard. He always plays with that chip on his shoulder as if he’s got something to prove. You’re going to get the same Dustin every game.”

That’s flying around, battling local foils before he takes his show back out on the road — just as any top Big 12 rebounder would do.

“It’s not over at all, because Jameel is just another guy who can rebound the ball," said Hogue, who managed to ourebound ISU star Melvin Ejim his senior season. "As you can see, we have a board where we rebound over there and he’s beaten me every day. So I’ve got to figure out something. He and Daniel Edozie, those are some big guys that rebound so well, so it will never stop. I’ll never stop getting better because those guys push me every day.”