AMES — ISU fan favorite Levi Peters threw down a PG-rated Twitter vow in the wake of sustaining a season-ending Achilles tendon injury in Saturday’s 32-28 loss to No. 19 Kansas State.

“I’m going to kick the (expletive) out of this injury and rehab and come back stronger faster and smarter than I ever have been next season,” the tweet read.

“(He) battled a defender 15 yards on an Achilles tendon rupture and then threw him off him to help try to get involved in the play,” Rhoads said. “That’s courage and toughness.”

Peters, a 5-11, 216-pound redshirt sophomore, both forced a fumble and recovered one last season, mostly as a special teams player.

He’s had GIFs made out of his crushing takedowns of opponents and now plans to attack rehab the same way.

“It’s a huge loss,” said starting MIKE linebacker Jevohn Miller, an emerging leader on the Cyclones’ young defense. “He would have been a guy that could have produced for of on the field, not just on special teams. He’s been working in the film room. He knows the defense. But just as far as energy it’s going to be a big loss and I’m going to be looking for someone to step up. I guess I’ll probably take some of that role myself, just before special teams, get them a little bit more hyped out there because he usually does that. We just all need to step it up now and bring more energy to the field for him.”

He’s not just talking defense or special teams, either.

“I want to be Levi Peters when I grow up.” 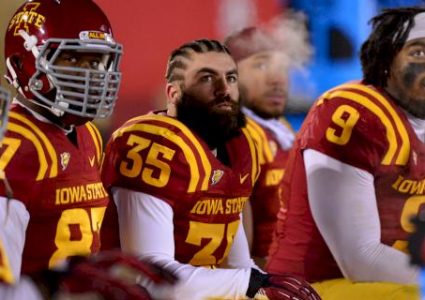 Peters to play through torn muscle against Kansas