Mangino will join his father, Mark, on Iowa State’s coaching staff. Mark is in his first season as ISU’s offensive coordinator/tight ends coach.

“Tommy has earned the opportunity to be an assistant coach at this level,” Rhoads said. “He is mature beyond his years. We received tremendous recommendations from Division I coaches that he’s worked with and been around. He will be a solid addition to our staff.”

Prior to his time in Fayetteville, Mangino served on the coaching staff of Hutchinson (Kan.) Community College. He served as offensive coordinator in 2012, as the Blue Dragons tied or broke 15 school records, including a team record in pass completions and individual records in total offense, passing yards, rushing yards and receptions.

“This is probably the most exciting time of my career just because it’s my first time being a full time coach at a BCS school,” Mangino said.

Mangino served as the passing game coordinator for Hutchinson in 2011. That season, the Blue Dragons set a school record with 601 points on the season. In 2010, Mangino was responsible for HCC’s quarterbacks and wide receivers.

Combined across his three seasons at Hutchinson, Mangino’s quarterbacks threw for 7,200 yards and 78 touchdowns. Among the players who Mangino worked with was 2013 NFL Draft first-round pick Cordarrelle Patterson, who plays for the Minnesota Vikings.

Mangino served as an offensive graduate assistant at Kansas for two seasons (2008-09) for his father, Mark. Mangino primarily worked with quarterbacks, helping Todd Reesing break nine school records. He was on-staff when the Jayhawks defeated Minnesota in the 2008 Insight Bowl.

Mangino was a two-sport athlete at Washburn University, playing football and baseball. Prior to attending Washburn, he was a JUCO All-American at catcher for Johnson County, batting .310.

He is married to the former Danielle Huff, and the couple has one son, Vinny. 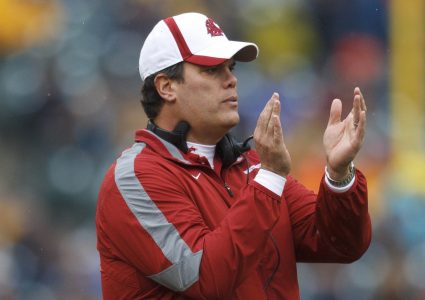