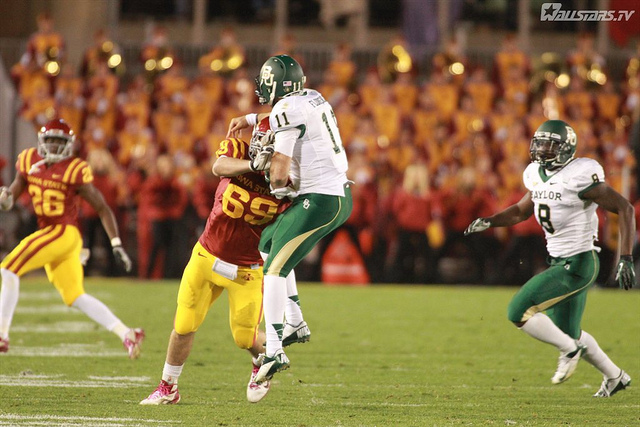 Pick a stat, any stat. If it has to do with offense, chances are that the numbers will prove that Baylor has been the best at it so far during the 2013 college football season. Heading into Saturday’s date with your Iowa State Cyclones, Baylor is currently ranked first nationally in all of the following categories:

Fewest punts (13) – Is that kid really on scholarship?

(Thanks to our good friends at enCYCLONEpedia for statistics.) Okay – we just established what you already knew. So far this season, Baylor is to offense what George Strait is to music – awesome.

Now comes the obvious question. At some point, isn’t your best defense against this crew an offense that bleeds the clock and keeps the Bears off of the field? I referenced Kansas State doubling up Baylor in time of possession last Saturday and asked Paul Rhoads about this earlier in the week.

“You have to score at the same time,” Rhoads said before noting that Baylor’s opponents have a 35-25 edge in this statistic throughout the season so far. “They are well behind in time of possession. They are scoring at whatever it is – minutes per game and points per minute and all of those. When you are scoring that many points, time of possession is relative if you are scoring every time that you control the ball.”

Sure – moving the chains and milking some clock would be great for Iowa State’s chances in this one. But at some point, you are who you are. Iowa State is not Kansas State. The two teams are built differently.

“If you are not used to running an offense slowed down and all of that and it gets you out of rhythm and you are not productive with it, it is not effective,” Rhoads said. “Bill has done that. Kansas State has done that year after year and game after game. It is not new to them.”

Point is, if you’re expecting Iowa State to hand the ball of to Jeff Woody 30 times on Saturday night, that isn’t going to happen. Iowa State will continue do Iowa State’s “thing” on offense. Hopefully, that results in enough offense to give this 33-point underdog a sniff at an upset. ABOVE: Jarvis West caught three touchdown passes vs. Baylor in 2012.

The Bears will win if…

…Their less than spectacular defense even has a pulse. If it does, Baylor will win because honestly, can anybody imagine Iowa State’s beat up offense outscoring the Bears in a shootout in Waco? I can’t.

“When you watch them play and you see us playing them, you are going to see 11 guys basically from about 10 yards on in to the ball,” Iowa State’s offensive coordinator Courtney Messingham said of the Bears’ 24th ranked defense. “They don’t play a traditional cover 2 deep where you see a traditional two safeties way back or a cover 3. They are going to try to squeeze the line of scrimmage a little bit and try to say, ‘We dare you to throw a post.’”

In a way, that’s a good thing. Unlike in recent years, Iowa State does have a few dangerous downfield threats who could have a big game on Saturday night vs. this Baylor defense. Sophomore Quenton Bundrage immediately comes to mind. But there is a downside to this approach too.

“West Virginia probably threw six of them (deep posts) and Buffalo probably threw five or six. That’s great when you’re completing them,” Messingham said. “When you’re not completing them, that puts you in 2nd and long. We have to take our opportunities to throw some balls against them down the field but I also want to make sure that on second down if we don’t get it, I get us back to 3rd and medium.”

Iowa State’s offense accumulated nine three and outs in 17 drives last week against Texas Tech. If that happens against Baylor, the Bears likely will cover that colossal point spread.

While Iowa State’s offense struggled to do much of anything in the second half against Tech, the defense held its own, holding the Red Raiders to zero points on four of their first five offensive possessions of the final two quarters.

“They were holding steady in the second half and that third quarter,” Rhoads said of his defense. “You’ve got to capitalize on those. That’s one of the key pieces when you look at the statistics that say ‘this team is right there,’ it might not be reflective of the 1-4 record but unless you finish one of those drives and catch a little bit of momentum and catch a lead like we are finding a hard time of doing, that win-loss column is not going to change.”

…They win the turnover battle and somehow can manage to slow down Baylor’s rushing attack.

The turnover conversation speaks for itself. Offensively, Iowa State is bringing a butter knife to a bazooka fight in this one. The Cyclones need an equalizer and turnovers would do the trick. Just use last weekend as a perfect example, as Texas Tech more than doubled up Iowa State in total yardage, yet the Cyclones still had a chance to win the game with under five minutes to play.

While shutting down Baylor’s offensive completely appears to be a bit of an impossible task, you do have to start somewhere. Slowing down Lache Seastrunk and the Bears’ rushing attack is likely where Iowa State will start. Iowa State held Baylor to 115 rushing yards in last season’s 35-21 win over the Bears.

“We defended the run very well. Every game starts with defending the run from an old defensive coaches perspective," Rhoads said. "We didn’t do that very well on Saturday against Texas Tech, a team that got over double what they have been averaging on the ground. It started there and by taking that away, we were able to play maybe one of our best defensive games last year.”

And as a result, Iowa State’s offense thrived by racking 557 total yards of its own on the heels of five touchdown passes by quarterback Steele Jantz.

“His strength is that he doesn’t have any weaknesses. He’s fast. He’s strong. He’s agile. He makes people miss. He has exceptional vision. He catches the ball. That’s why he is a legitimate Heisman Trophy candidate. He makes it hard to make them one-dimensional. Their scheme does as well.”

Quarterback – It’s been the hot topic all week long. Sam Richardson will probably start the game, but will he finish it?

Running back rotation – Lots of talk this week about the health of Aaron Wimberly and the work load that he’ll be able to handle after dinging up a shoulder and his lower back vs. Texas Tech. Wimberly is supposed to play on Saturday, but how much? I suspect Iowa State will limit his carries. Expect Shontrelle Johnson to see a decent amount of playing time in this one.

Fast start – The problem for most teams that have lost to Baylor this season is that when they get down early, the immediately start pressing on offense. Iowa State can’t afford to get down by two or three touchdowns in the first quarter in this one. That would make Iowa State one-dimensional on offense and as we’ve seen numerous times already this season, the Cyclones aren’t very good when they can’t run the football.

The 33-point spread is ridiculous but honestly, I felt more comfortable about Iowa State covering the 16 vs. Texas Tech a week ago than I do this.

Having said that, I do believe that Iowa State will make this at least somewhat interesting throughout the first three quarters. By all means, Paul Rhoads and his team have nothing to lose heading into this one. Nothing at all in fact.

I fully expect Wally Burnham’s “bend but don’t break” defense to completely sell out in this one. Baylor will rack up a ton of yards and Iowa State will take its chances at stopping the Bears in the red-zone while hopefully forcing some turnovers along the way.

“We have got to get it where it doesn’t matter who is in there, we are able to be successful up front and also running and throwing the football,” Rhoads said. “They start it all. They have to protect for the quarterback and they have to help open lanes up for the running backs.”

I fully expect a better offensive performance by the Cyclones than what we saw a week ago. Tech’s defense is without question the best in the Big 12 at this point in time. Baylor’s has yet to really be tested. The Cyclones should score some points, but not enough to pull off what would go down as a monumental upset.