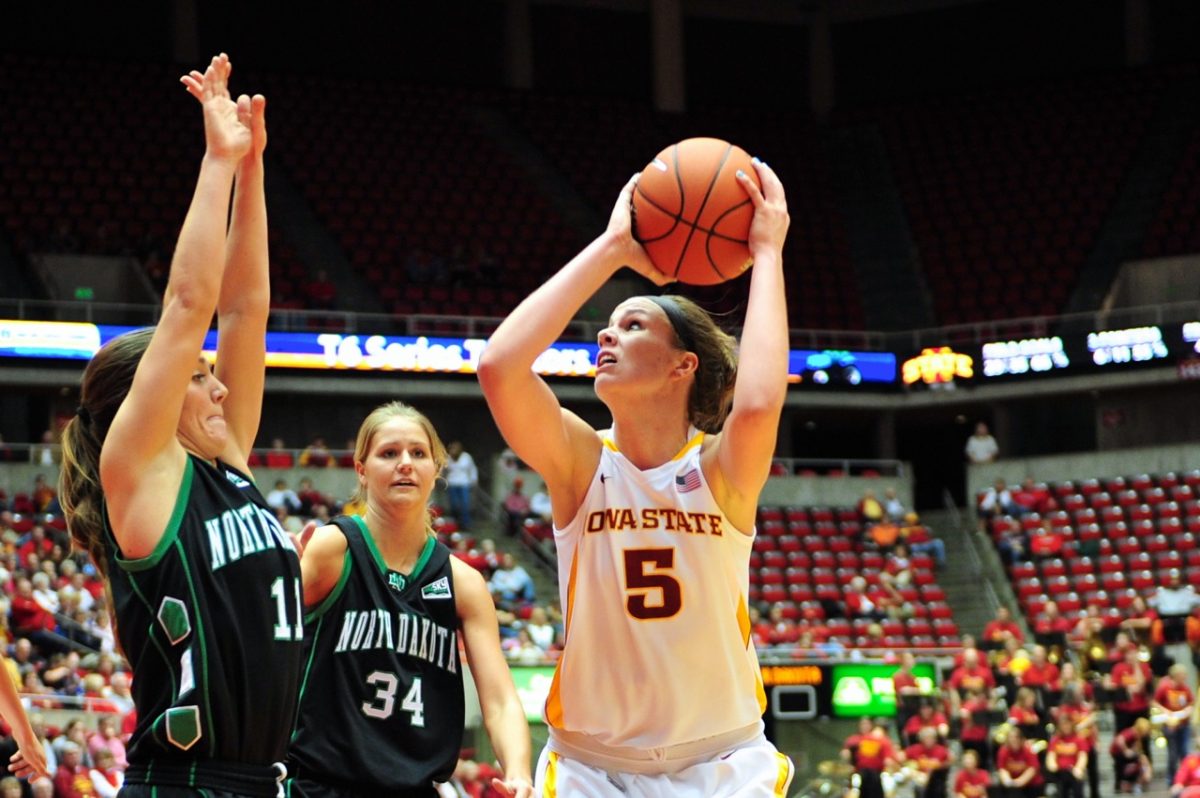 Cyclone Fanatic’s coverage of iowa State women’s basketball is brought to you by our good friends at Wilson Toyota of Ames, located at 2212 S. Duff Ave.

AMES — If Iowa State’s 87-45 win over Drake on Tuesday night were a boxing match, the Cyclones would have gotten a knock out. That’s only if someone on the Drake bench didn’t throw in the towel first.

Without All-Big 12 forward Chelsea Poppens in the lineup for the second game in a row, Bill Fennelly’s Cyclones have yet to flinch. Four Cyclones finished the game in double figures but it was Iowa State’s suffocating defense that held its in-state rival Drake to a measly 16 percent shooting mark in the first half and led 51-13 the break was the difference.

"I don’t know if we can play much better," said Fennelly after the game. "We did everything we needed to do. We took care of the ball."

The Cyclones held Drake’s Kyndal Clark, who was averaging 17.5 points per game coming into the contest, to zero points on an 0-for-6 night from the field. Drake’s starting five only accounted for 11 points in the Bulldog loss.

"When we are playing defense like that and we are making shots and we’re not turning the ball over, we have a chance to be pretty good," said Fennelly.

Iowa State has held four opponents to under 20 percent shooting in a half so far this season. Drake ended the game shooting 26 percent as a team.

On the offensive end, Hallie Christofferson and Anna Prins were brilliant down low. Christofferson was 5-for-6 from the floor, recording 20 points and 10 rebounds – the fourth double-double of her career. That comes after a 18 point outburst in Saturday’s 18-point win over Illinois.

"The last eight minutes of the Illinois game was great for her and she just kept going from there," said Fennelly. "To get 20 and 10 in 24 minutes, that’s pretty impressive. You’ve got to be good and you’ve got to be playing hard to do that."

Christofferson is averaging 15.2 points per game this season, which leads the team.

"Hallie is a kid that is going to change our team dramatically," said Fennelly. "Especially with Pop not around, we need her to be that kind of person that wants the ball, shoots the ball, scores the ball. She defends in space. She can rebound. The last 32 minutes she’s played, she can’t play any better."

Prins, who earlier in the week Fennelly said would face the most pressure due to Poppens’ absence, did not disappoint. The senior dropped 17 points on a 7-of-12 night from the field.

"I think Anna Prins is playing the best she’s played since she’s been on campus," said Fennelly.

And then there was sophomore point guard Nikki Moody, who might have played the most complete game of her career. Moody’s 15 points and 10 assists in only 24 minutes marked the first double-double of her career.

After the game, Fennelly said that Poppens’ status going forward is still day-to-day.

Up next for the Cyclones is a road trip to Iowa City next Thursday at Carver Hawkeye Arena. Tip time is schedule for 7:30 p.m.

*** This marks the seventh 5-0 start in Iowa State history. Iowa State is one of five undefeated teams in the Big 12.

*** Bill Fennelly is now 13-5 against Drake in his career at Iowa State. The Cyclones have won eight of the last nine in the series.