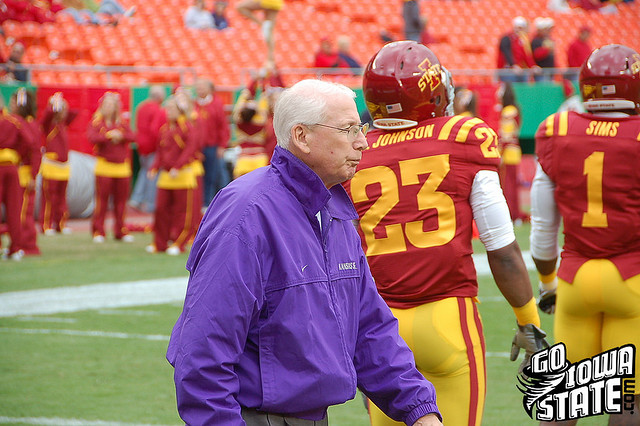 As the illustrious soothsayer Phil Collins once said, "Can you feel it coming in the air tonight? Hold on." Ok, so Mr. Collins probably didn’t have the 2012 Farmageddon game on the mind when throwing that bad boy together back in the early ’80’s, but it seems to fit.

In our contemporary culture everything is the biggest or best thing, EVER. The only thing shorter than our collective attention span’s is our memory. Just log on to Twitter sometime and the declarative statements are unavoidable.

It is with that preface that I can reasonably assert that Saturday’s game against Kansas State is the most hype-worthy event at Jack Trice Stadium in the last 35 years.

The 25th ranked Cyclones host the 5th ranked Wildcats in front of a crowd that could potentially near a record 60,000, with countless others surely sneaking a peek at the video board from outside the stadium.

In the 120 years of college football played at Iowa State, you can count the number of times two ranked teams have met in Ames on one hand:

September 28, 2002: #19 Iowa State vs. #20 Nebraska. In an electric Jack Trice, Iowa State blitzed the Huskers 36-14. As Pete Taylor eloquently stated as the final buzzer sounded, "This may not be the Nebraska of old, but it certainly is the Cyclones of new."

K-State’s trek to Ames on Saturday marks just the fifth time two ranked teams have met. That says a lot for the state of the Iowa State program in past years and highlights the opportunity in front of this 2012 group of Cyclones. Win games like this and pen another chapter in the surge of Cyclone football.

For as long as I can remember, Iowa State has searched for a conference rival. Yes, they’ve always had a meaningful match-up in September with Iowa, but those contests have recently felt like a really big appetizer. For the last three decades, Nebraska had been the easiest squad in the conference to pick a fight with, but ultimately that series was very one-sided. The Huskers never saw Iowa State as a legitimate threat. Yes, the Cyclones got some shots in along the way, but the Huskers had bigger battles on the mind. And Nebraska took their ball and whimpered away to the Big 10 just when things were getting interesting with the Cyclones.

K-State probably sees themselves as a level above Iowa State at the moment, which is fair. They have more of a recent history and they are the squad currently in the top five. Knocking them off their perch and destroying their Championship aspirations is a good way to amplify a rivalry.

K-State is a model for how teams with a perceived disadvantage in talent can compete in this juggernaut of a conference. They dismember you like an assembly line: by taking out your will with efficiency and relentlessness. The Wildcats have turned the ball over three times in five games. They have allowed a mere two sacks and have been penalized a mind-bogglingly low nine times.

Somehow the Wildcats are averaging 44 points per game, despite being 119th out of 120 teams in college football in number of plays run per game. I’m beginning to wonder if 73 year old K-State Head Coach Bill Snyder has some secret formula he has unearthed. Snyder said recently, "I have different eating habits. My doctor doesn’t like it. I’ve just grown into some habits, and I eat one meal at day, and it’s really late at night." Even the man’s diet is bizarrely efficient.

In a league full of prima-donnas and gimmicks, the Wildcats are most comfortable slugging it out in the back-room of a dive bar. Are you man enough to stop it?

Under Paul Rhoads, Iowa State has aspired to have the same workmanlike characteristics. As the old adage says, "Hard work beats talent when talent doesn’t work hard." The Cyclones have proven to be a formidable, tough-minded squad. They are 4-1 and have played the nation’s 3rd toughest schedule up to this point.

They brought their lunch pail to work and got after the Horned Frogs in Fort Worth, winning the turnover battle for the first time since the Oklahoma State a year ago. To beat Kansas State, it is going to take that type of effort and a little extra. The Cyclones are going to attempt to beat K-State at their own game; it is impossible to sneak attack a team that prefers a street fight. The trenches will not be a place for the meek on Saturday. If Iowa State wants to make a statement, it all starts with the big uglies.

Two weeks ago, the Texas Tech game was circled as the game to clear the vaunted "next hurdle" as a football program.  It didn’t go as planned. As fate would have it, the Cyclones have earned a bigger opportunity this weekend. It is difficult to describe, but talk with anyone around the Cyclone program and they all sense the same thing, something is different about this team. Even with a misstep against the Red Raiders, the momentum carried on. Last week’s victory was a step up the hill of consistent relevance. This week they can leap further. Iowa State had never defeated a top five team until last year’s stunner against Oklahoma State. The Cyclones have a very real chance to make it two top five wins in two years on Saturday, and this time nobody will be caught off guard if they pull it off.

It won’t be easy, K-State comes into Ames with all intentions of dashing Iowa State’s ambitions with a machine like irreverence. They are the definition of execution over emotion. It sets up for a memorable October afternoon in Ames. It may not be a rivalry yet, but it’s going to a spectacle. 60,000 plus will be there on the premises to see the havoc unfold.

Can you feel it coming in the air tonight? Hold on, here comes Farmageddon 2012. 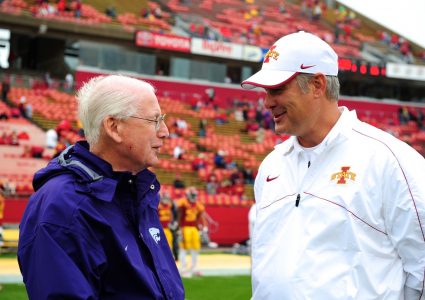 A quick look at the Big 12 bowls