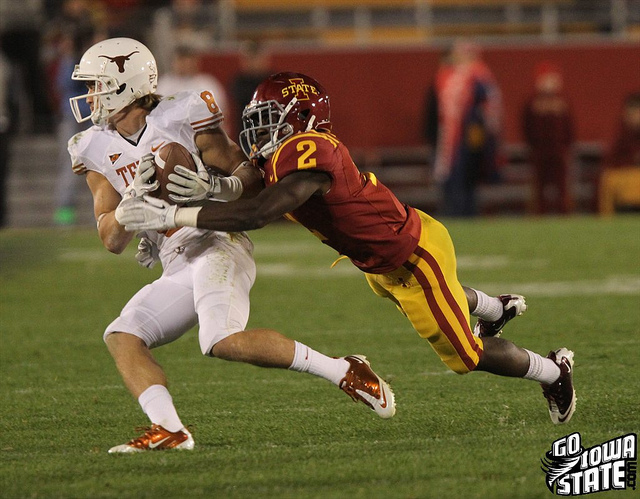 “We can either go repeat history or we can change it and write it ourselves. That’s the mindset that they are approaching the week with.”

According to head coach Paul Rhoads, that’s how the Cyclones are approached their bye week along with this Saturday night’s game against unbeaten Texas Tech.

You see it was one year ago when the Cyclones began 3-0 (sound familiar?), only to be humbled by the Texas Longhorns in a week five laugher, that being a 37-14 loss to Texas at Jack Trice Stadium in front of what Rhoads calls the best pre-game crowd he’s sseen since arriving at Iowa State.

From there, the Cyclones lost three more games. One bad lossed turned into four.

A number of factors contributed to the four game skid. Talent was one of them. The Cyclones lost to some good football teams (Texas, Baylor, Missouri & Texas A&M). Maturity was another.

Loud and clear, that was the message coming out of Ames on Monday. The 2012 Cyclones are a much more mature group and unlike a year ago, they used their bye week to the bye week to get better.

“We probably didn’t have our best week of practice leading up to Texas and it showed out there on the field,” said junior free safety Jacques Washington.

“We are well on our way to having one of our better bye weeks,” said senior defensive tackle Jake McDonough. “I would compare this one to the one right before Oklahoma State. I think that we’ve approached it really well. The guys are more prepared. The guys have actually wanted to work and we improved a lot over the bye week.”

Rhoads has seen the urgency and growth within his program over a year’s time.

The Cyclones and the Red Raiders will kick off at 6 p.m. Saturday night inside of Jack Trice Stadium. The game will be televised on Fox College Sports.

That’s the read I got from Rhoads when he discussed the ankle/knee injury to junior running back Jeff Woody on Monday.

“He ran good in practice yesterday (Sunday),” said Rhoads. “He did not practice but he ran good so a week ago, I probably would have told you that he wasn’t going to suit up. After watching him yesterday, I’m hopeful that he will play in this game. Probably more optimistic than the doctors and the medical people but they are usually sort of grumpy about that anyway.”

As for senior tight end Ricky Howard (who underwent a knee scope just after the Western Illinois game), he’s good to go.

“He will play against Texas Tech unless something would happen during the week,” said Rhoads.