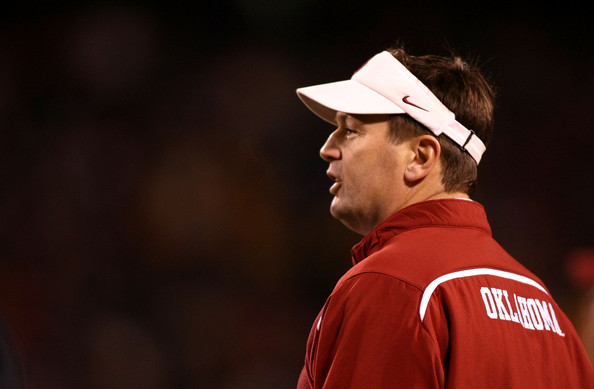 The Oklahoma Sooners enter 2012 as the favorite to win the conference. A quick look at their roster reveals why once again they’re loaded on both sides of the ball.

The Sooners start out strong up front with a veteran offensive line that returns four starters – Lane Johnson (moved from right to left tackle), Gabe Ikard, Ben Habern, and Tyler Evans – who have started a combined 102 games, 84 of which come from the interior three. Ikard is the most recognizable of the four after being named first team all-conference in 2011, while Habern is one of the best centers in the country. The only new starter will be at right tackle, where Daryl Williams, Tyrus Thompson, and Derek Farniak are battling it out.

Landry Jones will start at quarterback for the fourth straight year and is one of the best at his position in the Big 12. A year ago, he finished sixth in the country in total offense and threw for over 340 yards per game with 29 touchdowns, and for his career the pocket passer has thrown for over 12,000 yards and 93 touchdowns. The biggest weakness in Jones’ game is a tendency to give up the football to opposing defenses – he has thrown 41 career interceptions as well. Once the offense gets to the goal line Jones is often brought to the sidelines and Blake Bell, a 6-6, 254 pound sophomore, is brought in to carry the football. Used as a single wing quarterback in a Tim Tebow (or more recently Collin Klein)-esque approach Bell racked up 13 touchdowns on the ground last season.

Dom Whaley was the break out star of the Sooners backfield for the first seven games of last season, when the walk-on averaged 121 all-purpose yards and scored nine touchdowns before a broken ankle shelved him for the year. Whaley, a senior who has since been awarded a scholarship, was still out for the spring, but in his absence OU was able to show off its impressive backfield depth. Junior Roy Finch holds a slight lead over Brennan Clay for the backup running back spot. Finch is an ultra-quick 5-foot-8 back who is tough to get a hand on, let alone bring to the ground without the help of a few teammates. Last season he picked up 605 yards on the ground, the majority of which came after Whaley went down. All of Oklahoma’s backs are highly skilled all-around players who can catch the ball out of the backfield and return kicks in addition to toting the football.

Wide receiver is another area of great depth. Jaz Reynolds and Kenny Stills return as starters on the outside. Stills is the team’s top returning pass catcher after piecing together 61 catches for 849 yards and eight touchdowns and he’ll be a top contender to make first team all-conference in the Sooners’ wide open offense. He is also the primary punt returner. Reynolds was third on the team in all three receiving categories a year ago with 41 catches, five touchdowns, and just over 700 yards. This spring’s breakout performer was early enrollee Trey Metroyer. Metroyer led the team in receptions and yards in the spring scrimmage and was picked out several times by Sooners’ head coach Bob Stoops as an emerging playmaker.

With the departure of tight end James Hanna, the position is bare for 2012. During the spring junior college transfer Brannon Green competed with Taylor McNamara, an early enrollee, for the first shot at playing time. Fullback Trey Millard has been more than a blocker for Oklahoma’s offense, carrying the ball 24 times and catching it another 13 times in 2011.

Head coach Bob Stoops’ younger brother Mike returns for a second stint of leading the formidable OU defense. Although the defense loses four starters from a year ago, they still return a wealth of talent that will force a lot of opposing offenses into poor performances.

At defensive tackle nothing changes, with senior Casey Walker and JaMarkus McFarland back to start and Stacy McGee still serving as the main backup. Defensive end is an entirely different story, as Big 12 Defensive Player of the Year Frank Alexander is gone as is his counterpart Ronnell Lewis, a first team all-conference performer. Replacing those two will be a difficult task, but David King and R.J. Washington will get the first crack at it. King and Washington were effective despite limited playing time, with King putting up two sacks and Washington showcasing excellent pass rushing ability in adding five. Pushing King and Washington for playing time will be sophomore Chuka Ndulue and juco transfer Chaz Nelson.

Tom Wort returns as the starter at middle linebacker after being fourth on the team in tackles last fall. He added 3.5 tackles and two interceptions. Corey Nelson started 11 games a year ago, flipping between weak side linebacker (where he’ll play this year) and stand-up defensive end. Nelson returns as the team leader in both tackles for loss (8.5) and sacks (5.5). Joseph Ibiloye, a senior, will take over the strong side linebacker position. In the past Ibiloye has mainly been a spot duty player and special teams performer.

Five players started games last year for an Oklahoma secondary that now has plenty of experience to go along with an abundance of talent. The safety positions will be handled by Tony Jefferson (a junior SS) and Javon Harris (a senior FS). Jefferson was all over the field in 2011, leading the team with four interceptions and added 4.5 sacks while finishing third in tackles. Harris intercepted three passes, forced two fumbles, and made 47 tackles. Aaron Colvin started at both boundary corner and free safety and, incredibly, was team’s leader with 84 tackles. Demontre Hurst will start at field corner, and is another all-conference performer and the owner of 27 career starts. In 2011 Hurst broke up 11 passes and intercepted another which he returned for a score. The final man in the secondary who made starts last year was junior Gabe Lynn. Despite looking to be the odd man out of the starting lineup, Lynn should expect to see plenty of action in nickel situations or if there are any injuries.

Oklahoma returns the key performers on their special teams units, including punter Tress Way, kicker Michael Hunnicutt, and long snapper Austin Woods. Way averaged 63 yards per punt and placed over half of those inside opponents’ 20 yard line, while the freshman Hunnicutt went 21-24 on field goal attempts. Again, any combination of Clay, Finch, Stills, Reynolds, and Whaley can do a nice job of returning kicks and punts.

There are few weaknesses on this Oklahoma squad. Behind a prolific passing attack and suffocating defensive play they reached the top spot in the polls early last fall, and they return eight starters on both sides of the ball putting them in position to make a run at a Big 12 title and possibly a national title. One of the most talented, deep, and experienced teams in the conference, if the Sooners start building momentum this season, watch out.