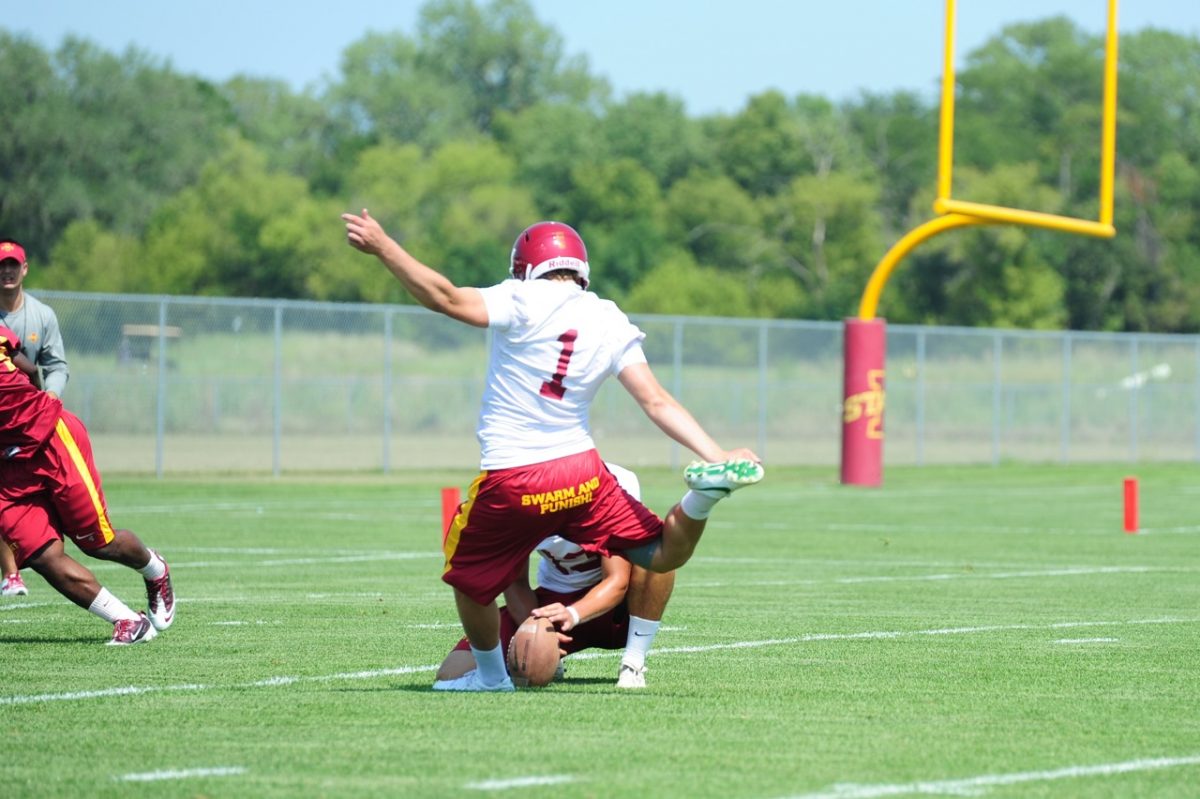 We’re less than a week away from kickoff 2012 and Iowa State’s kicking situation is still "wide open" according to head coach Paul Rhoads.

However for today, let’s just assume for a minute that true freshman Cole Netten is either going to be the guy, or at least play this year for the Cyclones.

NOTE: That on Monday, Rhoads announced that junior Edwin Arceo will handle kickoff duties for Iowa State on Saturday vs. Tulsa. (These questions were written up before knowledge of a legitimate kicking competition. In no way are we attempting to leave Arceo out of the conversation.)

Cyclone Fanatic recently caught up with a guy who knows a little bit about the kicking position. That’s former Cyclone Bret Culbertson. Enjoy this "Five Questions" feature with Culbertson and learn a little bit more about what it’s like to be a kicker at Iowa State along the way.

CF: If you had a chance to talk to freshman Cole Netten sometime between now and kickioff, what advice would you give him regarding the situation he’ll be in as a rookie during the 2012 football season?

BC: I’d tell him to embrace it, love it and just do what he does.  He’s done the exact same thing in high school, but now it’s on a bigger stage.  He’s been successful at the high school level and knows he has the tools to be successful.  He just has to go in with confidence and know that his team and his coaches have his back.

CF: Based off what you’ve seen from Netten over the years, what are his strengths as a kicker? What does he need to work on?

BC: I’ve worked with Cole a few times during his high school career as a coach with Kohl’s Kicking Camps.  From what I have seen, he’s a solid ball striker with a nice fluid motion and graduated as a 5-star kicker with Kohl’s Kicking Camps. He’s always had college level height on field goals.  I think the height will continue in college even without the aid of a field goal block.  The one thing I would like to see him not do is watch the snap.  I notice his eyes following the ball from the snappers hands to the block in his game film.  This is not necessarily a bad thing, but in a college game things happen much faster than they do on a high school field.  If you see a miscue with the snapper or holder, like a high snap or a bobbled ball, doubt can enter the mind. Do you finish the kick, or abort the mission?  Once the ball is snapped you have to commit.  You have to focus on your own task, and trust the snapper and holder to get it down.  Despite the headlines on Sunday morning, field goal kicking IS a team effort.

Overall I think Cole has the tools to be successful and I can’t wait to see Cole begin his college career. The guy has a great head on his shoulders with an awesome family as a support system. THAT is key.

CF:Netten is an Iowan. He’s a cold weather guy. In your opinion, how important is it have a guy kick at a cold weather school like Iowa State, who is used to the climate?

BC: It’s HUGE.  I like to use the example of the Green Bay specialists Mason Crosby (K) and Tim Masthay (P).  They are both among the best in the league at their specialty.  They can do it consistently in Green Bay’s cold weather conditions, so away games down south only get better!  If I were a college coach at one of these cold northern schools, I can’t say that I’d ever look any further south than the Midwest for a kicker or punter.  If you’ve handled the cold through your high school career, there’s no reason why you can’t during your college career.

BC: Ohh, the jet streams of Jack Trice! Well, it depends on the day.  Not only does it depend on the day, but it depends on what part of the field your on.  You get days where the flags on the goal posts are dead, but there is still a breeze on the 40 yard line.  You get days where you’re ready to kick and you feel a slight breeze hitting you from the right, but the flags are going left.  I’ve even seen days where the flags on the same goal posts were going two different directions.  No lie. It only becomes more of a mental game when the wind gods toy with you. You just have to make your own judgement and go with it. Comparatively to the other stadiums I’ve been in, I’d rate it an eight.

CF: You’ve got some exciting things going on in your career right now. Tell us a little bit about what you’re up to…

BC: Other than spending time with my wife and two kids, I currently own Level 37 Sports Video (www.level37sports.com), a video production company geared toward using professional video tools for the advancement and development of prep, college and pro athletes.  We assist camps, combines and individual athletes in using video to its fullest for team and player analysis as well as exposure at the next level.  We travel and serve athletes from coast to coast as well as central Iowa, and do many recruiting highlight films as well as combine workout videos for all sports.  We also produce promotional video for businesses geared toward athletics. I also work with small businesses outside of athletics creating promotional, training and other video tools under the umbrella of Level 37 Media, LLC.