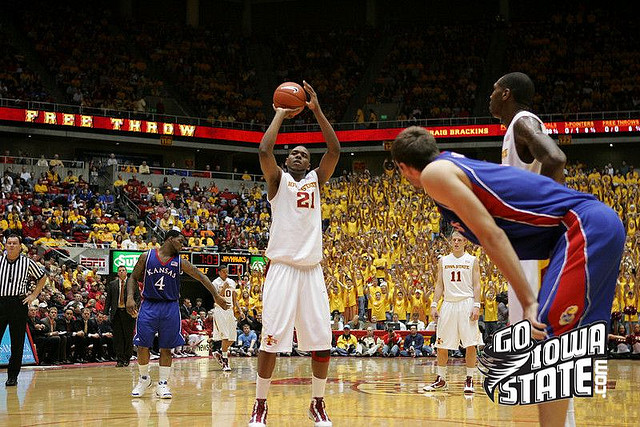 Regardless of what you see at the Valley Southwoods Gymnasium, things are rarely as good as they seem. Capiche?

Here are a few non-Royce White vs. Craig Brackins notes that I took during Wednesday night’s Capital City League play. This marked the first time that I’ve attended the league this summer. I shot a ton of video highlights that I’ll get edited and posted on the site sometime Thursday morning.

CLICK HERE to view video interviews with White and Brackins.

*** I really can’t put into words how impressed that I was with incoming freshman Georges Niang. Niang out-scored White and Brackins both in the night’s main event with 35 while tacking on 13 rebounds as well. The big box score isn’t what caught my attention with though. It’s the fact that as sloppy as that game got (and if you’ve ever been to a Capital City League game you know exactly what I’m talking about), Niang never seemed to get caught up in it.

Niang hit three 3-pointers and showed me some range that I didn’t know he had. He impressed Brackins too.

"I’ve never seen hands like that. You can throw anything at him and he’ll catch it," said Brackins of Niang after the game. "He knows the game. He’s like a veteran player but he’s young."

Again – Let’s chill when it comes to the Georges Niang hype train because that’s not what I’m trying to stir up with this post. I just call it like I see it and in front of a standing room only crowd that came to watch two pros duke it out, Niang really stood out to me.

*** Incoming freshman Sherron Dorsey-Walker is clearly a very gifted shooter but he’s extremely small and struggles in most other aspects of the game. Even so, it’s hard to imagine that a guy like Dorsey-Walker won’t fit in well with the type of basketball that Fred Hoiberg likes to play at Iowa State. I can definitely see him as a Tyrus McGee-like spark off the bench in the future and even more after a few years in Iowa State’s weight room. Dorsey-Walker went 4-for-8 from 3-point range on Wednesday. Two of those bombs were converted with a hand in his face.

*** Former Cyclone Diante Garrett confirmed to me on Wednesday night that he’ll participate in the NBA’s summer league with the Phoenix Suns.

Garrett scored 49 points while dishing out 10 assists in Coca-Cola’s 3-point loss to the Will Clyburn led Walnut Creek YMCA team. Clyburn led all scorers on the night with 50 points while going 18-for-30 from the floor.

*** Some veteran needs to sit freshman Naz Long down to have a serious talk. Long is playing way to hard for the CCL! All joking aside, Long looks like Diante Garrett did as a freshman but is probably an inch shorter. Still, of the players I saw Wednesday night, none played harder than Long who even tangled up with Royce White a few times. Long teamed up with Brackins and scored 25 points in a win.

*** Korie Lucious and Bubu Palo combined to score 72 points in their team’s loss. I didn’t stick around for this game but cannot imagine that there’s a stronger backcourt in this year’s CCL.