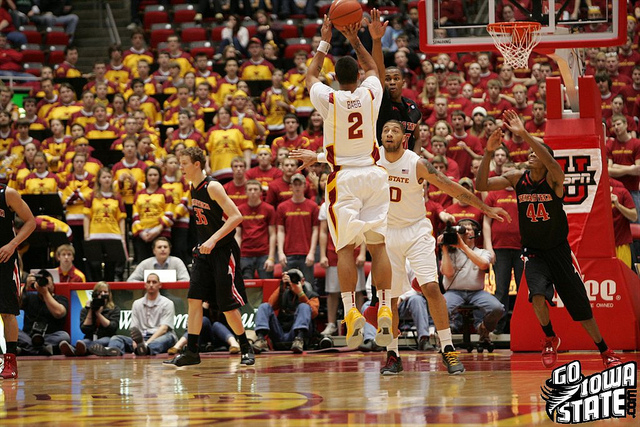 WILLIAMS: Blum – It’s Wrestlemania season you know? Iowa State’s road trip to Missouri on Wednesday night reminded me of a classic "Hell in a Cell" match. It’s amazing that everybody escaped that thing alive! I saw you tweeting about this so I know that you’ll agree. That might have been the most physical basketball game that Iowa State has played in all season and you know what, I credit the Cyclones for that. At the beginning of the year, toughness was a major concern regarding this basketball team. Not anymore. Iowa State is a tough bunch and like we discussed in last week’s debate, not many teams in the country will want to be matched up with the Clones come Big Dance time in March. Your thoughts?

BLUM: That was intense. Taking away the eventual outcome, it was an extremely entertaining basketball game. If I was a random fan of Georgetown (or whoever) and stumbled across that on my ESPN3, I wouldn’t have been able to leave my couch. That was a combo of a boxing match and a track meet. I was exhausted watching it.

The result wasn’t what Cyclone fans wanted, but Hoiberg and company have to be jacked with how they competed. Mizzou played fast and tough, but for a good portion it was Iowa State getting to the loose balls and 50/50 balls on the glass. In the end, turnovers and transition defense were too much to overcome. Twenty-four fast break points for Missouri…that is an incredible number.

I’m pretty sure Mike Dixon and Flip Pressey would shatter the 40-yard dash time at the NFL combine. Good grief! Oh and is Dixon capable of missing a shot? He has the ugliest, most effective shot I’ve seen since Shawn Marion.

I was actually encouraged after watching that contest. Some things to clean up obviously, but I really like this team’s momentum heading into March. The pieces are coming together. I do ask you this question: Why didn’t Mr. Royce White get more touches in the last 10 minutes? He was in beast mode and they lost track of him.

WILLIAMS: I agree with your thoughts on Royce. The man was in a zone. That’s all in the past though Brent. I’ve been thinking a lot about March and the tournaments…

I think that by now, most people know me as a guy who stays away from the kool-aid correct? Factor that when you read what I’m about to write. The eye-test tells me that Iowa State is better than an 8-9 seed in the NCAA Tournament. Am I wrong? Look what Iowa State has done in the last week alone. Won at Kansas State and took Missouri to the wire in Columbia.  This team has beaten Kansas and let a double-digit second half lead slip away in Lawrence.

Point is, if Iowa State beats Baylor tomorrow, I truly believe that the experts will be proved wrong and Iowa State will at the very least by a 7-seed and potentially a 6 or 5 (if something crazy happens) depending on what happens next week in Kansas City.

BLUM: You raise an interesting theory. Let’s break this down Ron Jaworski style. As of today from a raw numbers stand-point, Iowa State belongs in the 8-10 region. Every number evaluator has them in the low 30’s:

I’m not a smart fella, but if you divide 32/4 you get 8. (I dominated flash cards in 2nd grade.) So I have no beef with where the "experts" have them seeded.

But as a neutral observer (as we all are) ask yourself who has the better chance of beating a #1 or #2 seed in the tourney right now? These likely top 6 seeds: Temple, Creighton, Notre Dame, San Diego State, Murray State, Gonzaga.  Or Iowa State?

Granted all the schools listed above have some impressive wins and sound resumes, but from the "eye-test," I don’t think they have the same ability as Iowa State to compete with the top tier schools. The Cyclones have the ingredients to do damage: multiple wing weapons and Royce White. The big fella creates so many problems and is such a nontraditional player that he is a nightmare to game-plan for.

So talent wise, I think they are definitely in the 5-7 range. Regardless, barring a trip to the Big 12 final, I don’t see how Iowa State can get anything above a 6 seed at this point.

That said, I will throw this out there. The only two schools that I think Iowa State would face a significant uphill battle against are Kentucky and North Carolina. I would not like Iowa State’s chances against those two.

But on the right night, I don’t believe that there is another team in the country that the ‘Clones couldn’t knock off if they play solid basketball. Am I nuts? Or just partially nuts?

WILLIAMS: Only partially nuts. I think that we’re actually on the exact same page here and to clarify my previous post, I have no beef at all as to where folks have the Cyclones right now. Again like we both pointed out, I’m talking eye-test here. The Cyclones pass it better than many.

The Baylor Bears are coming to town on Saturday Blum. The winner of this game will earn the 3-seed in next week’s Big 12 Tournament in Kansas City. I’ll come out of the gates right now and say that I like Iowa State’s chances in this one. The matchup isn’t great but remember that Baylor is Baylor is Baylor is Baylor. This is a different team away from Waco and let’s face it, the Cyclones have been awesome at home all Big 12 season long.

I’ll never forget a couple of days after Iowa State’s 14 point loss to Baylor earlier this season, Fred Hoiberg was asked during a media session about what went wrong.

"We were way too soft," said Hoiberg.

That was it. The Mayor felt no need to offer up any extra analysis.

One big thing that has impressed me about this team all season long is its coachability. When you get down to the nitty-gritty specifics of basketball, this group rarely makes the same mistake twice in its second meeting with an opponent.

I really feel like Hoiberg and his staff used that Baylor loss as a lesson on toughness. The Cyclones have been anything but weak ever sense. That makes me like Iowa State’s chances in this one. Thoughts?

BLUM: This sets up perfectly for Iowa State to come out with their hair on fire – I’ve always wanted to use that expression, although it doesn’t sound like a pleasant experience. Three-seed on the line, the Cyclones played their worst basketball of the conference season down in Waco and it’s senior night. Add into the fact it’s a Saturday night game (haven’t had one of those all year–Tailgating anyone?) and Hilton will be frothing at the opportunity. It’s going to be a madhouse. I can’t wait.

Interestingly enough, Baylor has never won in Ames. But the Cyclones can’t just throw out a C effort and expect to waltz to a win, this Baylor team is still a top 10 squad. The Bears appear to be playing with a growing amount of confidence after their well-documented mid-February swoon. They have won three straight games and have actually showed some *gasp* toughness. Quincy Acy has been bringing it and they’ve shot the three ball much better the last couple games.

Their length gave Iowa State some issues in Waco and that will continue to be a problem. Quincy Miller was the X factor and still is. At 6’9 with his mid-range game, he is a horrendous match-up for Babb and company. Will be curious how they combat him this time around.

WILLIAMS: I agree on all points.

Time for a little Big 12 banter. Here are my picks for Saturday’s games.

Oklahoma State @ Kansas State – There’s no way that Frank Martin’s team loses this game. No way at all. Did you see how ticked off that guy was after last Saturday’s loss to the Cyclones? The man has his team’s attention. If that isn’t the case, somebody needs to check that group’s pulse…

Missouri @ Texas Tech – You know how the "Flag Guy" runs around the balcony of Hilton Coliseum? I’ll run around waving a CycloneFanatic.com flag naked if Missouri loses this game.

Texas @ Kansas – The Horns gave KU trouble early in the season. But it’s senior night in Lawrence. Kansas is a lot better than they were during that first meeting. KU by a comfortable 15 points.

Baylor @ Iowa State – Not only is this game for the 3-seed, it will also dictate if the Iowa State men and women will play at the same time next week in KC. For all of the reasons that we’ve discuss already, I’m taking the Cyclones.

Brent – What do you think the line will be for this game? I’m guessing Baylor by a point or two….

BLUM: Crazy we’ve already reached the end of the Big 12 regular season. By the way, you owe me for the two bets we made prior to the year:

1. Kansas won the conference. (You picked Baylor, I picked KU.)

2. Oklahoma State finished in the bottom of the conference (You said they’d finish in the top half.)

I will gladly take several Boulevards at an establishment of choice in KC. To be fair, I also picked A&M to get 2nd in the conference. Yikes.

Kansas State 71 Oklahoma State 62. Loved the bow-tie look from Martin last Saturday. He looked like a cross between Pee-Wee Herman and Frankenstein.

Oklahoma 65 Texas A&M 59. A&M is right up there with UCONN as most disappointing team in the nation. This year can’t get over fast enough for those guys.

Missouri 74 Texas Tech 58. After the scenario you just laid out, we ALL need Mizzou to win. Although it reminds me of this great moment in Hilton Coliseum history. This is a true story:

In the week prior to the 1993 NCAA tournament, I was lucky enough to attend an ISU practice to get autographs. The practice concluded and my 8-year-old self and two of my friends went into the Cyclone locker room.

We got to see all of the players. Loren Meyer was bench pressing; Justus Thigpen was jamming out to an eight track and Julius Michalik was combing what little hair he had left.

These guys were my idols. But Freddie was a notch above the rest. We approached the Mayor while he was applying his Speed Stick – I distinctly remember it was Speed Stick. He asked us about school and told us to come to Iowa State when we were old enough. My day was made. At the time, my life was made.

Cool story I know. But here’s the "best" part. As we were leaving the locker room, we were treated to the sight of Johnny Orr with nothing but a towel on. "Hiya kids!" he yelled-like only JO could. Yes, I have seen most of then 70-year-old Johnny Orr. After that we quickly left the building. It’s a memory I won’t ever forget.

Kansas 75 Texas 66. Eric Heft broke out this gem on the radio broadcast on Wednesday: "Kansas has more conference titles than home losses under Bill Self." Wow.

Iowa State 72 Baylor 66. I expect Baylor to be a 1 point fave or a pick’ em. As you said, selfishly I desperately want Iowa State to win so those that go to KC can watch both the men and women play. A motivated Cyclone squad gets it done.

Lastly, I request all you fanatics get to Hilton early and perhaps get a little tailgating in. The temperature is supposed to be around 40, you’ve handled much worse during football season. In fact the Oklahoma State football game was right around 40 degrees at kick-off. It would be awesome for Baylor to arrive in their bus into a mass of populace in the parking lot, "We aren’t in Waco anymore." 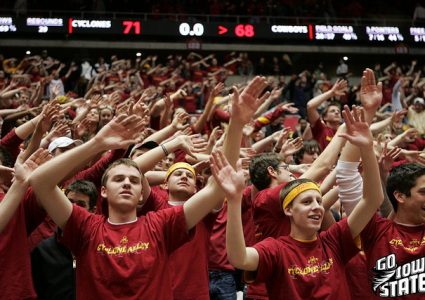 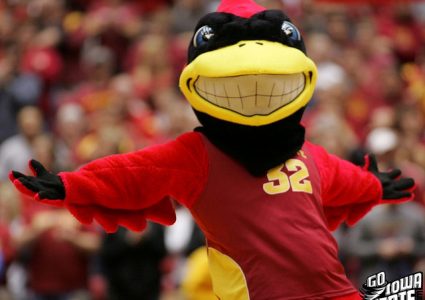