The following is a press release written by Iowa State athletics communications.

STILLWATER, Okla. – Iowa State jumped out to an 11-point first half lead on Oklahoma State but went cold the remainder of the game and dropped a 71-63 decision Saturday night at Gallagher-Iba Arena. With the loss, Iowa State drops to 17-10 overall and 8-8 in Big 12 play. The Cowgirls improved to 14-11 overall and 6-10 in the conference.

Chelsea Poppens led the Cyclones with 19 points and 17 rebounds in the loss, her 14thdouble-double this season. Lauren Mansfield was the only other Cyclone in double figures with 12 points.

Oklahoma State was led by freshman Liz Donohoe, who scored 27 points. Tiffany Bias tallied 17 points, including 14 in the second half.

The Cyclones led 40-36 at the half and extended that lead to six points at the first media timeout of the second stanza. The Cowgirls went on a 19-2 run over the next eight minutes and were able to hold off the cold-shooting Cyclones. Iowa State shot just 29.2 percent in the second half.

The first half was a game of runs with seven lead changes in the opening stanza. The Cyclones were able to jump out to an 11 point lead with 5:11 left in the half. Oklahoma State responded following a timeout and went on a 15-8 run to finish the half trailing the Cyclones 40-36. Iowa State was led by nine first half points from Poppens and Moody. Donohoe, who the Cyclones held to four points in Ames, scored 14 in the first half.

Iowa State returns to action Wednesday when it hosts Kansas State on Senior Night. The Cyclones will recognize seniors Chassidy Cole and Lauren Mansfield after the game. Tipoff is slated for 7 p.m 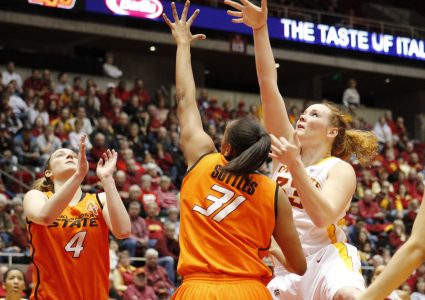