COLUMBIA, Mo. – Iowa State 174-pounder Chris Spangler upset No. 3 Dorian Henderson of Missouri in a 31-10 loss at Missouri Sunday in the Hearnes Center. The seventh-ranked Spangler topped Henderson in a 7-4 decision. The No. 17 Cyclones drop to 0-8 in dual competition and 0-3 in Big 12 duals. Missouri improves to 5-1 overall and 1-1 in conference grappling.

“(Chris) wrestled hard and smart and came back from a deficit after getting taken down first,” said Iowa State head coach Kevin Jackson. “I think he’s really good and he has put himself in a position where everyone in the country knows he’s going to be a true contender. He continues to perform the way we expect juniors in this program to compete and it was  in a hostile environment, which is exciting to see.”

Henderson is the highest-ranked opponent Spangler has defeated this season. Spangler improves to 5-1 overall and has posted 13 takedowns this season. The Naperville, Ill., native posted a reversal in the final 40 seconds of the match to extend his lead by three points and avoid overtime.

Two Tiger wreslters earned pins against the Cyclones. At 184 pounds, 19th-ranked Mike Larson pinned Iowa State’s Mikey England at the 2:36 mark and Cyclone Joe Cozart lost by fall in the final second of his match against No. 14 Kyle Bradley.

Iowa State’s Andrew Sorenson ended the meet with a major decision over Missouri’s Zach Toal. Sorenson remains perfect this season and posted five takedowns in the victory. The Woden, Iowa native leads the Cyclones in takedowns this season with 17. 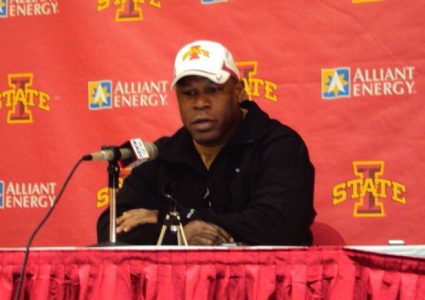 Sooners too much for ISU grapplers