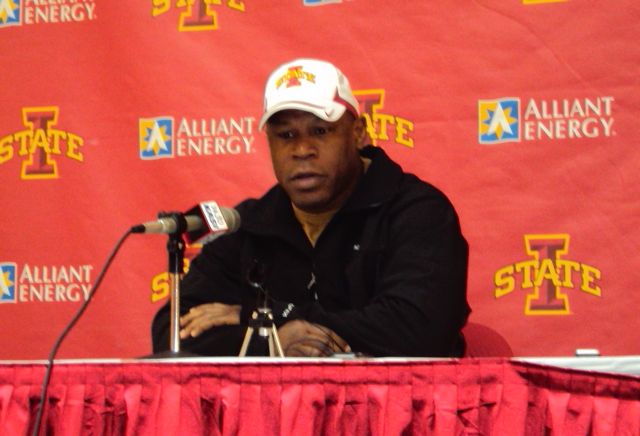 The Cyclones (0-2 Big 12) lost the first five matches of the day, but were sparked at 165 by Andrew Sorenson’s 11-1 major decision over Bubby Graham after the intermission. The redshirt senior extends his record to 9-0 overall and 5-0 in dual competition. The fifth-ranked Sorenson racked up three takedowns and one three-point near fall in his victory over the Sooner redshirt junior.

Iowa State won its next two matches after Sorenson’s victory. Spangler, ranked 10th in the country at 174 pounds, came out with a strong start against Oklahoma’s Chase Nelson in the seventh match of the day. Spangler was up 7-1 just over one minute into the match and finished with two takedowns in his 12-11 decision over Nelson.

At 184, Beard continued the Cyclone momentum with a 7-4 decision over redshirt junior Erich Schmidtke. Beard posted three takedowns and one escape in the victory and improves to 4-1 in dual competition this season.

Redshirt junior Matt Gibson also posted a victory at heavyweight for the Cyclones with an 8-2 decision over Elijah Madison, who was ranked 13th by W.I.N. Magazine in the preseason poll. Gibson improves to 4-1 in dual competition this season and is 1-1 in Big 12 duals.

Redshirt freshman Michael Moreno was back in the Cyclone lineup for the first time since Iowa State’s second dual meet of the season in which Moreno suffered a concussion. Moreno lost in a 9-5 decision to No. 12 Matt Lester. Redshirt freshman Kyven Gadson saw his first match in a Cardinal and Gold singlet against the Sooners, but fell to Keldrick Hall at 197 pounds in an 8-2 decision. Iowa State plays host to No. 1 Iowa Sunday in Hilton Coliseum for the annual Iowa Corn Cy-Hawk rivalry matchup. The meet is set to begin at 2 p.m. (CST) and will be televised on Mediacom.