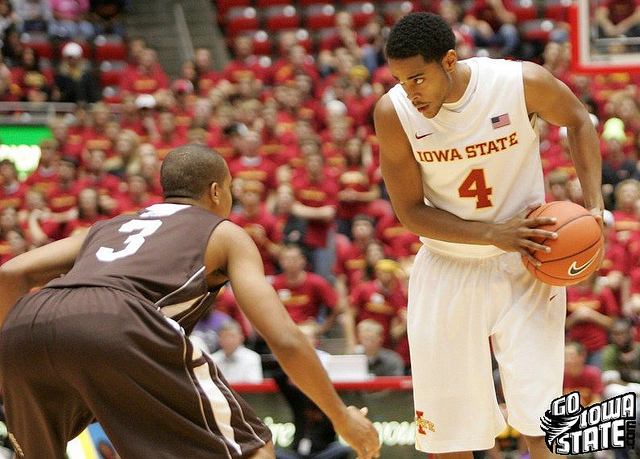 Cyclone fans who attended Iowa State’s 81-64 win over Lipscomb on Wednesday night witnessed one of the most memorable individual performances inside of Hilton Coliseum in quite some time. Unfortunately, it was a former Cyclone, a little one at that, who did the damage.

Former Ames High standout and current Lipscomb senior Jordan Burgason tied a Hilton Coliseum record by converting on nine 3-pointers (Dedric Willoughby also has nine), but even that wasn’t enough to offset Iowa State’s two-headed monster at guard. Scott Christopherson and Chris Allen combined to make eight 3-pointers of their own while scoring 24 and 23 points respectively and the Cyclones cruised to their ninth win of the season.

“I felt like everybody played hard, from one to 15 for the entire game," said Allen. "We took a step in the right direction today.”

Chris Allen – After attempting only three shots in Sunday’s win over Central Michigan, Fred Hoiberg and Chris Allen had a heart-to-heart.

"We got everything figured out," said Allen of the meeting. "He basically just wanted me to play harder and play aggressive. It doesn’t matter what else happens. He just wants you to play hard and aggressive. That’s what I am trying to do for him from now on.”

Allen responded to Hoiberg’s tutelage with arguably the best game of his Cyclone career.

"He took shots when they were there, was shot-ready," said Hoiberg. "He and I watched film for a long time. We were in there for about an hour the other day and just really talked about him coming out aggressive and playing his game. He certainly did that tonight and got us out to a great start.”

Royce White – Fred Hoiberg referred to Royce White as a "well-rounded" basketball player after the game.

White only scored six points in the win, but the big man also collected 10 rebounds.

“He takes three shots and he’s one of the most dominant players on the court," said Hoiberg. “Royce was phenomenal as a facilitator."

Oh yeah, about those eight assists…

"He had eight assists but he probably could have had about 15," said Hoiberg. "We missed a lot of wide-open looks that he got for us.”

White also had three blocked shots in the contest.

"He made some very good defensive plays tonight," said Hoiberg, who heavily praised White’s "stat stuffer" of a game.

Defense – Jordan Burgason went 10-of-16 from the field on Wednesday night. The rest of Lipscomb’s team combined to go 15-for-49. Besides one guy having a career night, Iowa State’s defense wasn’t bad at all in the victory.

Team GPA – Hoiberg ended his postgame press conference as a proud basketball coach but his final point of the evening had nothing to do with what had recently happened on the court. Grades came back on Wednesday and the Cyclones ended the fall semester with the highest team GPA in program history.

Babb still slumping – After his 1-for-7 shooting performance on Wednesday, Iowa State guard Chris Babb is a combined 4-for-19 from the field in his last two games. Babb appears to be a guy who can use a break right about now. That’s what he’ll get as Iowa State’s next game isn’t until Dec. 31.

“It will be good for him," said Hoiberg. "I know that he’ll get in the gym every day. He’ll be there when he gets back tomorrow. He’ll do everything he can to get back on track."

While Hoiberg has noticed a few minor mechanical flaws in Babb’s shot recently, The Mayor doesn’t believe that is the biggest issue right now.

"Chris Babb has a beautiful shooting stroke," said Hoiberg. "The big thing you try to tell him is to trust it. He’s going to go out there and have a breakout game and everything will be fine. It’s one of those things where that brain gets in the way too much."

Give credit where it is due. Towards the end of the game, which Cyclone finally slowed the great Jordan Burgason down?

That’s progress and that’s it for "Three Down." There’s no need to pile on what I considered to be a very positive step in the right direction for this team.