Chris Williams and Austen Arnaud talk Iowa State football, bowl games, the Big 12 and more in this installment of the Adam Gray Insurance Podcast at CycloneFanatic.com. 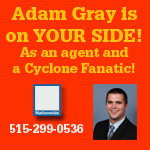 Williams/Arnaud Podcast: A look at the QB competition